Private Clubs and the Sour Pleasures of Resentment 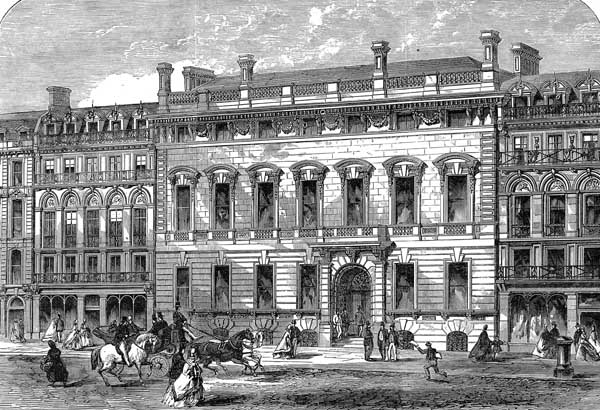 Some years ago, I sat next to a pleasant Norwegian lady who had just moved to London. Her father had been against the move.

“How,” he had asked her, “can you bear to live in a fascist country in which they still permit men-only clubs?”

“And how,” I replied, “can your father bear to live in a fascist country in which men are not allowed to belong to men-only clubs?”

Unlike many modern people, the Norwegian lady saw the point: that a society in which people are not permitted to form voluntary associations whose membership they choose must be a highly dictatorial one.

But in England, a group of prominent women, including Cherie Blair, the wife of the former Prime Minister, has signed a petition to “force” the Garrick Club to admit women as members, which it has so far refused to do.

The Club, which is nearly two centuries old, is named after David Garrick, the famous eighteenth-century actor, and has long had theatrical and literary associations. Dickens, Thackeray and Trollope were members, for example.

The petition contains the following words: “We believe that membership of the Garrick cannot be consistent with a commitment to equality and diversity.”

This suggests to me that the women, though prominent lawyers, are not very intelligent, or at least not very careful with their words: for by definition a club is committed to inequality and, if not quite to uniformity, at least to exclusivity.

A club to which everybody could be admitted would not be a club at all, but more like a voters’ roll, a street meeting or a mass demonstration.

The whole point of a club is to bring about an association of people who enjoy each other’s company and share some kind of interest: that is to say, to exclude the overwhelming majority of the world’s population. One might as well complain that a philatelists’ or a bibliophiles’ club is not open to bikers.

It is perfectly obvious that the prominent women who have signed the petition do not propose, if they gain entry, to allow their nannies or cleaning ladies to join with them. They are not suggesting that the Garrick open its doors to the hoi polloi, to dustmen, political fanatics, ex-prisoners, wife-beaters, drug addicts, boxers or the mentally handicapped, to mention only a handful of the potential categories of the membership of a truly inclusive institution.

They are complaining only that they are not admitted, and it is obvious that their petition breathes resentment. How can any club not want them as members?

The women are all prominent, probably belonging to the top 0.1 per cent of the population as far as income and influence is concerned. This illustrates to perfection the fact that resentment is an emotion that can survive any privilege, any income, any success, any personal power or influence.

That is why, perhaps, so many successful people actively try to destroy the means by which they made their ascent, for resentment lies behind much of the urge to destroy what exists.

Resentment is one of the few emotions that can, and often does, last a lifetime. Few of us have never felt it. In many cases it may well be justified: indeed, it would be surprising if someone could go through life without ever having suffered any injustice whatever that might conceivably justify resentment. Very few people, I surmise, have never felt resentment.

The trouble with it, however, is that it is as destructive as it can be long-lasting. It can be kept going at will, fondly incubated forever. It is destructive either of contentment and happiness, or of the willingness to do something to improve our situation.

It is not without its sour satisfactions, which is why it can last so long. At a lower level of ability than the 300 petitioners obviously have, whatever is resented provides a perfect explanation of personal failure.

Insofar as it provides such an explanation in advance of any possible effort, it actually hinders the making of effort in the first place. With carefully nourished resentment, a man can go through his life blaming someone or something else for his failures.

This enables him to be a failure and to feel morally superior to the world at the same time. If only the world had been just, what might he not have done! But it isn’t just, so he is a failure.

This cannot apply to the 300 petitioners, however, all of whom have been successful by most people’s standards. And yet they are still resentful. Why, and what psychological benefit does their resentment bring them?

If they were not resentful, they would have to face up to the fact that, whatever their own merits and their own contribution to their success (which must have been great), they have been fortunate in their lives.

The appropriate response to this would be gratitude that they have lived in such a time and place that their efforts have been duly rewarded.

But gratitude for one’s good fortune, which is often confused with complacency, is not a fashionable emotion. There are so many unfortunate people in the world that it somehow seems wrong, unfeeling or callous to be both fortunate and to acknowledge it.

Therefore, one must invent reasons to be resentful, thereby joining the unfortunate, the downtrodden and the oppressed. In that way, one can enjoy both the sweet fruits of success and the sour fruits of resentment—the best of both worlds, in fact.

The petitioners’ resentment blinds them to the obvious corollary of their complaint: women’s only clubs or associations could not exist, at least if any men wanted to join them.

According to their principle, private voluntary associations ought to be forced to accept as members anyone who felt himself to be unjustly excluded.

A Christian or Moslem club or association could not admit only Christians or Moslems, for to do so would be to discriminate on religious grounds.

I have, however, thought of a swift remedy for the petitioners’ resentment: a two-week sojourn in Afghanistan.