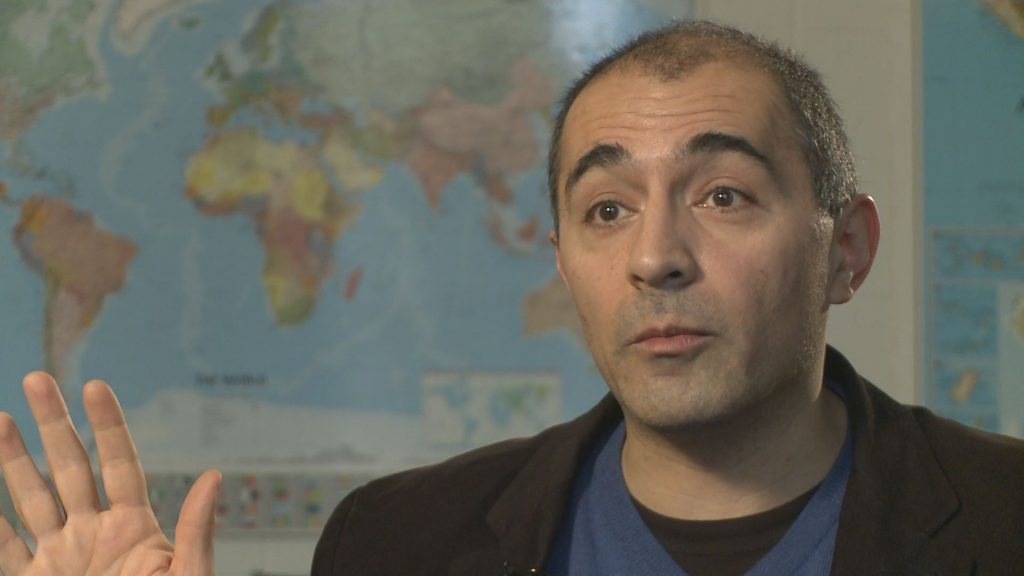 University of Denver Middle East studies professor Nader Hashemi provoked widespread shock recently by speculating that Israel orchestrated the August 12 attempted assassination of writer Salman Rushdie in upstate New York. Yet Hashemi’s conspiratorial musings were merely the highlight in a series of disturbing comments he made during the August 20 Iran Podcast episode on “Salman Rushdie and Iran,” in which he displayed his usual pro-Iran apologetics.

Iran Podcast host Negar Mortazavi, an Iranian-American journalist who consistently fronts for the Iran’s Islamic Republic regime, interviewed Hashemi about the recent attempted murder of Rushdie before a public presentation. This bestselling British-Indian writer has been a marked man, often living under police protection, after the Islamic Republic’s late Supreme Leader, Ayatollah Khomeini, issued in 1989 a fatwa, or Islamic legal ruling, calling for Rushdie’s death. Khomeini’s call to all Muslims worldwide to punish Rushdie’s supposed blasphemy of Islam in his book The Satanic Verses apparently caught up with him in Chautauqua, New York. There Hadi Matar, a Lebanese-American Muslim, grievously wounded Rushdie with a knife.

Hashemi ended his half-hour interview with a proverbial bang when considered Matar’s motives, given that his attack coincided with Israeli opposition to international “sensitive political discussions related to Iran’s nuclear program.” When Hashemi first heard of the attack, he wondered “what explains the timing” and, “is it just a coincidence, which is one possibility,” or did “nefarious political forces” endanger Rushdie? Among his speculations was that Iran’s Islamic Revolutionary Guard Corps (IRGC) incited Matar’s attack on Rushdie as revenge for the American 2020 drone strike killing of IRGC leader Qassem Soleimani in Baghdad, Iraq.

Yet, without any evidence, Hashemi proffered one “other possibility, which I actually think is much more likely,” a claim, the ADL noted, which “plays into age-old antisemitic conspiracies scapegoating Jews.” Namely, “this young kid Hadi Matar was in communication with someone online who claimed to be an Islamic Revolutionary Guard Corps supporter” but was a “Mossad operative” who “lured” Matar into his attack. Any resulting backlash against Iran would then cause the United States to scuttle nuclear negotiations with that country, he argued, as if Israel with such Machiavellianism would risk relations with key allies like America and Britain. Mortazavi, meanwhile, offered no disagreement with Hashemi while she spoke of “powerful hawkish forces both inside Iran, as you said, across the region, and some here in Washington who have time and again tried to stop diplomacy or sabotage it.”

Hashemi accepted such wild speculation, for he “was shocked that the attack took place,” given his benign estimation of Iranian theocracy and its jihadist doctrines with global appeal. Concerning Khomeini’s call for Rushdie’s head, the “Islamic Republic of Iran was not really talking about it. It was very much an issue of the past,” Hashemi claimed, except among “hardliners within Iran.” In the “media organizations that broadcast the official narrative of the Islamic Republic of Iran . . . you would have to dig very hard to find” anything on the Rushdie affair.

Because of international outcry, Mortazavi noted, after 1989 the “Iranian government tried to, unofficially, but tried to distance itself from the fatwa.” Indeed, Iranian President Mohammad Khatami in 1998 publicly guaranteed not to support Rushdie’s murder in exchange for upgraded British-Iranian diplomatic relations. Hashemi, however, warned that some Iranian clerics have argued that only Khomeini could revoke his fatwa, but of course he is dead.

Vain attempts at whitewashing Iran’s Rushdie policy aside, Hashemi’s analysis suggested a far more disturbing Iranian double game. Subsequent Iranian leaders could have issued contrary fatwas on Rushdie, Hashemi argued, but “of course, they didn’t do that, in fact they did the exact opposite. They have constantly reaffirmed that the fatwa is still valid.” Khomeini’s Supreme Leader successor, Ali Khamenei, has reaffirmed Khomeini’s fatwa several times, including “as recently as 2019 on Twitter,” Hashemi noted.

“The Islamic Republic has tried to sort of have it both ways. They have clearly said that this is no longer state policy” to kill Rushdie, Hashemi observed. Yet “ideologically within the Islamic Republic of Iran, particularly the hardline constituency, they have celebrated the attack last week on Salman Rushdie,” he added. In fact, numerous Iranian pundits and media outlets, like the pro-Khamenei rag Kayhan, praised the attack, and Iran’s semi-official Fars News Agency has in the past contributed to a bounty on Rushdie’s head now worth millions of dollars.

Given historic Islamic doctrine demanding death for blasphemers, the harsh realities surrounding Rushdie are not surprising, for “what Khomeini said was very much in keeping with a traditional understanding of Islam,” Hashemi conceded. “Islamic tradition on this question developed in the premodern world prior to the arrival of a human rights discourse” and “sanctioned a very harsh punishment for the act of blasphemy,” like other religions throughout history, he noted. Nonetheless, “this is an area of contention” today and of “moral tension within the community of Muslims.”

Nevertheless, whether Matar simply responded individually to Iranian incitement or had deeper connections to Iran, his targeting of Rushdie befits Iran’s longstanding record as a state sponsor of terrorism. Mere days before Rushdie’s fateful wounding, the United States Department of Justice revealed that Iranian agents had plotted to kill former National Security Adviser John Bolton and former Secretary of State Mike Pompeo. Expatriate Iranian dissidents in America and elsewhere, like Masih Alinejad, have also faced numerous Iranian death and kidnapping threats. Hashemi was therefore willfully blind to dismiss the twenty-four-year-old Matar as merely a “kid who comes from a broken home” who fell prey to “social media radicalization.”

Conspiracy theories have long surrounded The Satanic Verses, and imaginings about Israel and Rushdie fill Iranian media. Yet a professor securely living in America should have the professional detachment, not to mention the personal decency, to call out the Islamic Republic of Iran for its barbaric history rather than peddling its propaganda. Instead, in yet another disgrace for the hyper-partisan activists who populate Middle East studies, Hashemi merely echoed Iranian conspiracy theories within his broader whitewashing of Iranian terrorism.

Andrew E. Harrod, a Middle East Forum Campus Watch Fellow, freelance researcher, and writer, is a fellow with the Lawfare Project. Follow him on Twitter: @AEHarrod.

PrevWoman who accused Taliban official of rape is arrested, will be sentenced
Shabbat Shoftim ShalomNext