Protesters mass in France, Israel, UK and US to demand justice for Sarah Halimi 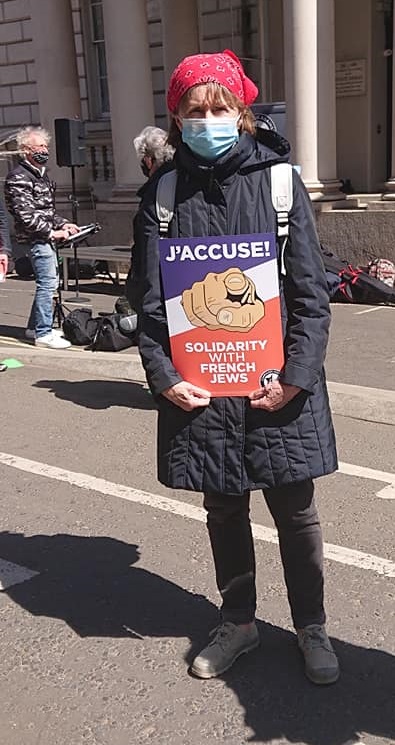 Details of the London protest from someone who was there.

The Times of Israel reported the demonstrations to urge the French Government to prosecute the killer of Sarah Halimi under criminal law thus: Protesters gathered in Paris, Tel Aviv, Jerusalem, London and other cities on Sunday to demonstrate against the ruling of France’s highest court that the killer of a Jewish woman in the French capital was not criminally responsible because he had smoked marijuana before the crime.

Sarah Halimi, a 65-year-old Orthodox Jewish woman, was pushed out of the window of her Paris flat to her death in 2017 by neighbor Kobili Traore, who shouted “Allahu Akbar” (“God is great” in Arabic).

The demonstration in London was a ticket only event organised by The Campaign Against Antisemitism (CAA). 200 people were permitted to attend under police supervision; the Paris demonstration was much bigger. My friend Cliff Dixon was at the London event and I reproduce the greater part of his report and his photographs here with his permission. 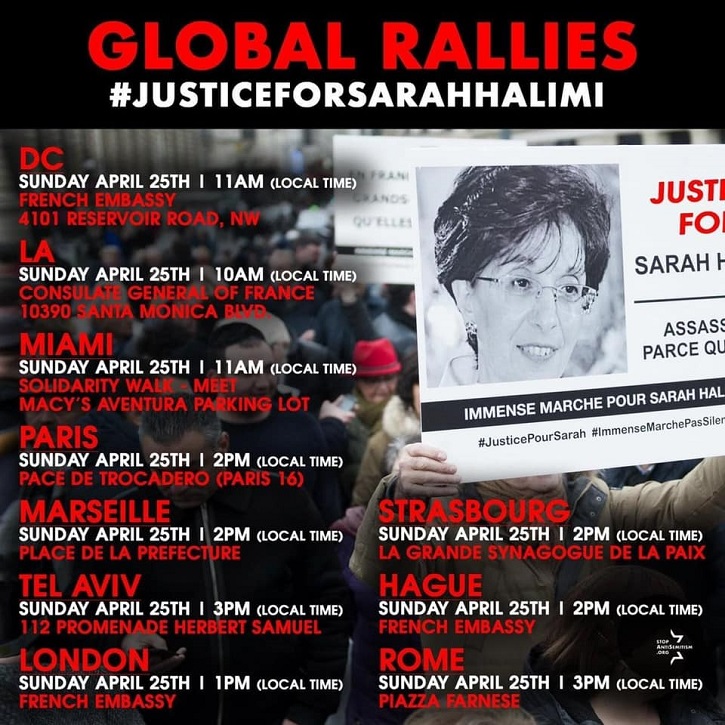 I joined with them in solidarity outside the French Embassy in London yesterday (25th April) to express our disgust at this miscarriage of justice.

Simultaneous protests had been arranged in many cities to highlight the case – In London, this was organised by The Campaign Against Antisemitism (CAA). Numbers here were unfortunately restricted due to Covid19 regulations which the group liaised with the local council and Police to keep within – Around 200 of us attended with tickets. The Paris event was huge and has thankfully received press coverage in the UK due to the sheer size and passion of those involved but so far has seen no comment from the aforementioned politicians and campaigners – a quick search on twitter with the hashtag shows a noticeable silence.

I got to the protest shortly before the start time and was heartened to see a number of activists I had been on previous demonstrations with in attendance. 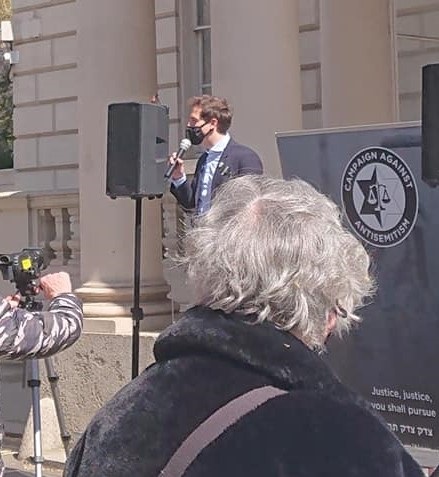 First on stage was the Chairman of the CAA, Gideon Falter. He recounted how, as a student in France, he had been shocked at the Police presence around synagogues that he had witnessed in the country due to the ongoing threat against his kin. Significantly, the point was also made that we have seen protests worldwide about racism over the past year but there has been silence regarding attitudes toward the Jews, something I myself have observed when covering marches from the likes of ‘Stand up to Racism’ where blatant Antisemitism has been on display.

Probably the most disturbing part of his speech was where he spoke of another case in France where a man high on Cocaine had thrown a dog out of the window to it’s death and had received a year in prison for the crime. Whilst he did not dwell on it, the question came in to my mind – Does a dog matter more than a Jewish woman in France today and why can one person high on drugs be convicted yet another is deemed unfit to stand trial?

A powerful voice for justice

The next speaker up was Dame Maureen Lipman. I have seen her articulate speeches on other events but I am noticing that she is getting more blunt as the atrocities pile up. I don’t blame her. 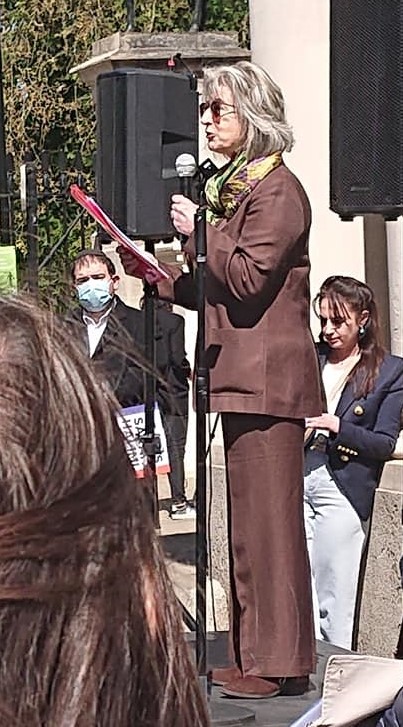 She spoke of historic Antisemism in France and how the French government seems paralysed by the fear of Jihadi retribution – Also of how the Antisemitic attacks don’t suit the leftist agenda that this is a response to the actions of the Israeli state.

The question was also asked – ‘Can a drunk driver walk free from their actions due to their intoxicated state?’ It was a point I had made myself to camera earlier in the event when interviewed and I think we know the answer.

Then a real slam dunk of an observation –

Please try to imagine the murder the other way round….would the courts have responded in the same way had a Jewish man of twenty-seven thrown a sixty-five year old devout Muslim woman to her death?

Would the world media and the Black Lives Matter movement and the extreme Left and Right have shown more interest ? I think we all know the answer.

From my own experience covering their events, I make her absolutely spot on. She followed up with the following comment – ‘On the left and in the West, Jews don’t matter’

It was pointed out that in the UK, drunken intent is still intent. This apparently doesn’t hold true in France.

Finally, a very powerful and possibly controversial point was made – The French regard themselves as the most civilised people in Europe. Yet If you can force feed geese until their liver explodes just to flavour your toast, you are probably, over the centuries, capable of putting your knee on the neck of the Jewish race.

A very brave statement that unfortunately resonates with the reality in France where the Jewish community are concerned. 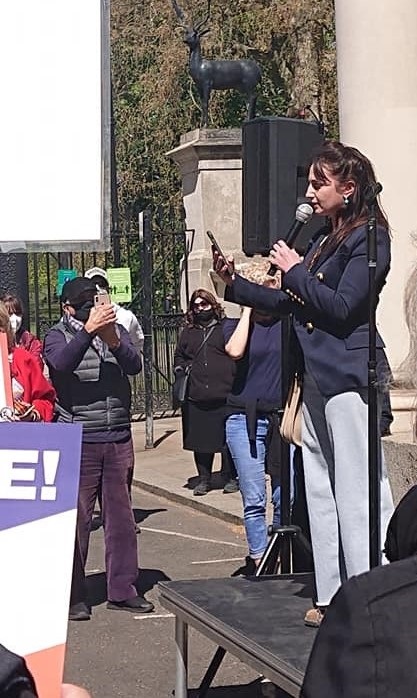 Next up was Sophie Wiesenfeld, the founder of The Hexagon Society (A Franco-British cultural society) Her impassioned speech was given first in French and then in English urging the Paris government to see justice done.

She was followed by the Political commentator and YouTuber, Raphael Landau. He read out a list of crimes committed against Jews over the last 10 years in France. Strikingly, he pointed out that the Jewish population in France is just 1% of the overall community yet has been subject to 41% of the racist hate crime in the country over the last few years

Finally, Muslims against Antisemitism were represented by one of their trustees, Liz Arif-Fear. She called for justice in the case of Sarah Halimi and that she would always stand with her Jewish brothers and sisters across Europe as we are stronger together

The fight against AntiSemitism

A number of the speakers at the event quoted The comedian and TV personality, David Baddiel – In a recent book, he stated that ‘Jews Don’t Count’ when it comes to the ongoing campaigns against racism.

Sadly, I have seen this over the course of a number of events down the years where ‘anti racism’ campaigners either dismiss or demonise Jews. For some reason, they don’t register in their catalogue of oppressed peoples despite having a history of over 2000 years of persecution, including the Shoah where six million were executed by the Nazis amongst other historical pogroms.

The silence of the ‘woke’ to the case of Sarah Halimi only makes his words more powerful and true. If you are serious about campaigning for women’s rights and against racism worldwide, then you have to confront these issues for everyone, not just a select few. It has often been said that the Jews are the ‘Canary in the Coal Mine’ when it comes to the health of a society or civilisation. If that is the case, then the sickness needs to be confronted now – the ‘woke’ are either a part of the solution or a part of the problem. Their silence suggests the latter