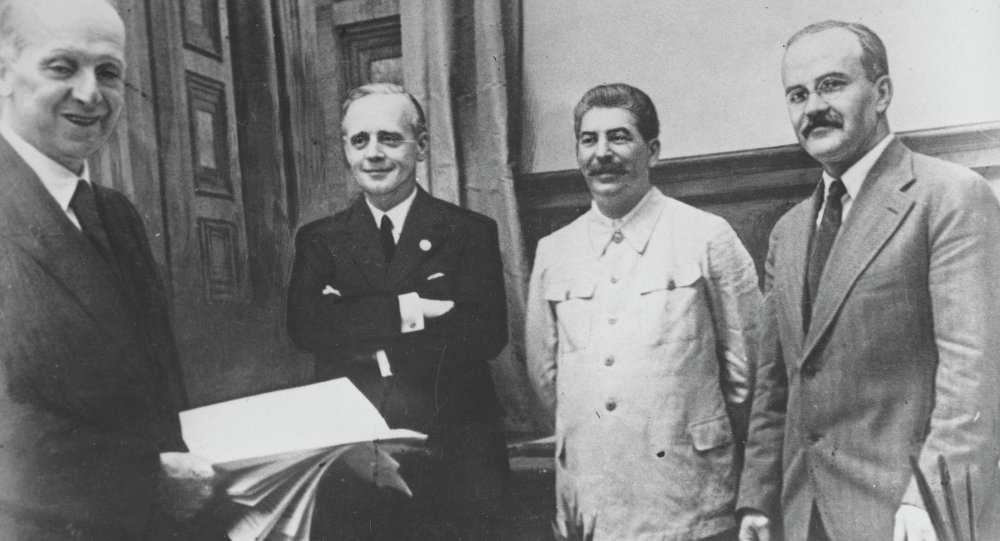 History has often been used and misused for political purposes. For instance, in the long, complicated, ongoing discussion of Brexit, commentators used aspects of British history, especially the British contribution to World War II, to bolster their arguments. A resolution passed by the European Parliament in Strasbourg on September 19, 2019  titled, “On the importance of preserving historical memory” has elicited a strong reaction. The resolution expressed concern about the efforts of the current Russian government to “whitewash the crimes committed by the Soviet totalitarian regime.”

The EP resolution has ignited a fierce battle over memory, particularly over interpretation of the start of World War II. Its most controversial statement was that the War, the most devastating in European history, was started as an immediate result of the notorious Nazi-Soviet Treaty on non-aggression, more commonly known as the Molotov-Ribbentrop Pact of August 23, 1939. The Pact divided Europe and the territories of independent states between the two totalitarian regimes, Nazi Germany and the Soviet Union, and paved the way for the outbreak of the War.

Response to the resolution was quick, and has begat a war of historical memory and accuracy. Russian President Vladimir Putin is a familiar international figure, lover of sports, black belt judo, image of a super hero, busy with many issues such as the removal of economic sanctions against Russia or the doping ban on Russian athletes, but his prowess as a composer of history has been hidden. The truth will out. In December 2019 Putin began revisionist history, in what is virtually a revival of a Stalinist historical narrative.

He is naturally angry at the EP resolution that the Soviet Union, as well as Nazi Germany was responsible for starting World War II. Putin joins those historians and politicians, who are commenting on the forthcoming 75th anniversary of the defeat of Nazi Germany on May 9, 1945.  Not surprising because of the present tension between Russia and Poland, he counterpunches against the EP by asserting that Poland, not the Soviet Union, was partly responsible with Germany for the start of World War II. In a speech in St. Petersburg on December 20, 2019 to leaders of former states of the Soviet Union, Putin carried with him what he said were archival documents on which he drew. His main contribution to historical analysis was an attempt to refute the allegation by the European parliament that it was the Soviet Union as well as Hitler and Nazi Germany was responsible for the outbreak of the War. Putin argues that Europe deliberately hides the truth about World War II in order to blame the Communist party.

Hitherto, we all knew, or thought we knew, that World War II began at 5 a.m. on September 1, 1939 when the Nazi Luftwaffe bombed the Polish town of Wielun, killing 1,200, and when five minutes later the German battleship Schleswig-Holstein fired at a garrison of Polish soldiers, a military transit depot on the Westerplatte peninsula, part of the Free City of Danzig, now Gdansk. Paradoxically, the Polish government is planning to build a museum on the Westerplatte site to honor the defenders of the peninsula. It will show that Poland suffered proportionately more than other countries; about 20% of Polish citizens were killed during the War. By comparison, though estimates of the exact number differ, the War led to the deaths of 27 million Russians, both civilian and 8.6 million military.

After large scale bombing of Polish railroads and communications centers, German troops began a mass invasion of the country. What is crucial in this recital of history is that on September 17, 1939, two weeks after the Nazi attack, the Soviet Union attacked Poland from the east. Putin has defended this action in a number of ways. Warsaw had sent militants to carry out sabotage and terrorist attacks, and had made preparations for the partition and occupation of Czechoslovakia. German troops entered Poland after the Polish government lost control of its armed forces , and there was difficulty in the territory of the country. Besides these considerations, the Soviet Union was restoring political and historical justice by returning to lands illegally seized by Poland in 1920. It was also protecting the population of Belarus and the Ukraine.

Putin did not mention the aggressive Soviet war against Finland that started on November 30, 1939, nor the invasion and annexation of parts of Romania.

To illustrate the relationship between the two countries, on September 22, 1939 an official ceremony was held in Brest-Litovsk by Soviet and German troops to mark the departure of German troops back to the line in Poland agreed to in the secret protocol of the M-R Pact. Two months later, on November 27, 1939, representatives of the two sides discussed the methods of cooperation to fight Poland. Other meetings occurred between the Soviet NKVD and the Nazi SS. Moreover, the Soviet Union supplied resources for the German war machine. The last Soviet supply train left for Germany on June 21, 1941, one day before Operation Barbarossa was launched against Moscow.

Putin remarked that unlike the heads of European countries, Stalin did not ”tarnish” himself n by any personal meeting with Hitler. But he showed no sign he had seen, the image in the photo of Stalin together with Ribbentrop, both smiling, an indication of collaboration.

Central in the criticism of the Soviet Union is the so-called non-aggression pact, commonly known as the Molotov-Ribbentrop pact,  signed in Moscow on  August 23, 1939 by the foreign ministers of the two countries, Vyacheslav Molotov, and Joachim von Ribbentrop in the presence of Joseph Stalin. Putin’s argument is that the pact was necessary because of the need for the country to protect itself, and because the Western powers had made their own agreement with Hitler. The treaty he said had been taken out of context by Westerners. Putin argues that the western powers and Poland had signed agreements with Nazi Germany. He referred to two documents: Warsaw in 1934 agreed with Berlin on the non-use of force. The Anglo-German naval agreement of 1935 allowed Germany to have its own navy, which was forbidden after World War I.

Here Putin touched on the 1938 Munich agreement and the role of British prime minister Neville Chamberlain. Surprisingly he praised Winston Churchill for his “honest  assessment” of the situation. He holds that Munich made war inevitable. In 2005, he accused  the Baltic states of politically attacking Russia to cover the shame of their collaboration with the Nazis. Other Russians, including the culture minister, criticized those in the West who oppose the annexation of Crimea by indicating that Ukraine entered into collaboration with the Nazis during the War. Munich is forever the hallmark of appeasement, the failure of not checking aggression. The West allowed the Nazis to invade Czechoslovakia and take the Sudetenland, with its 3 million mainly German speakers.

Interestingly, an exhibition at the Russian State Archives in Moscow is exhibiting documents of 1938 Munich and the Nazi actions during 1939. At the opening of the exhibition, Russian foreign minister Sergei Lavrov in December 2019 said that the Soviet Union was forced on its own to ensure its national security and sign a non-aggression pact with Germany.

Putin and Russian leaders such as the culture minister, call the M-R pact a triumph of Soviet diplomacy. Until recently, Russia has debunked the existence of the basic feature of the pact. What is missing in Putin’s account of history is the secret protocol in which the Soviet Union and Germany agreed to divide parts of eastern Europe.

Putin has not yet said his policy was to “make Russia great again,” but he continually refers to the Russian role in what he calls “the Great Patriotic War,” and celebrates the Soviet role as Victory day on May 9, now a major Russian holiday. But he still needs lessons in history. It is clear that Germany, Italy, Japan were the aggressors in World War II, and that Britain and the United States were defenders. The issue in judging Putin’s argument is whether the main role of the Soviet Union in the start of the War was victim or collaborator of Adolf Hitler. Germany might well have been defeated at an early stage if the Soviet Union had not helped the Nazis until it was attacked in 1941. Whatever the judgment, all can agree that appeasement is a dirty word, not a rational policy.

PrevI saw the writing in the sky
The Company Elle Keeps: Linda Sarsour Is “A Woman To Watch”Next