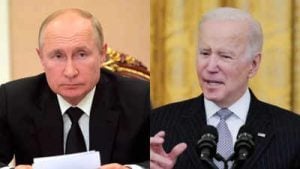 If I wish to substitute a new building for an old one, I must first demolish before I construct, — Theodor Herzl.

The current crisis between Russia and the West is fueled by a fallacy and accusation by Russian President Vladimir Putin that at the end of the Cold War in 1989-1990, the West, specifically the U.S., deliberately misled the former Soviet Union and broke promises on the issue that NATO would not expand to the east. This argument of Western betrayal is the motive for Putin’s call for the reversal of the extension of NATO.

Treaties are tools of statecraft, agreements or contracts that establish obligations between states or international bodies. Interpretation of treaties is supposedly set by the Vienna Convention, the rules drafted by a UN body and adopted on May 23, 1969. Nations, even those few who have not ratified it, follow the prescriptions of the agreement. However, compacts exist, as Alexander Hamilton argued in Federalist Paper 15, subject to the usual vicissitudes of peace and war, of observance and non-observance, as the interests or passions of the contracting parties dictate. The parties hope for benefits which may never be realized.

A number of issues are present.  Agreements may, deliberately or not, be left vague or couched in an atmosphere of ambiguity; documents may be construed or be interpreted in different alternative, ways shaped to fit the national interest of a nation or party; they may be understood differently if the political context changes.

History provides many examples of successful agreements.  A few can illustrate the point. The treaty of Tordesillas 1494 between Portugal and Spain divided lands outside Europe between the two countries. The treaty of Westphalia in October 1648 ended the 30 years war, established the concept of territorial sovereignty with countries in charge of law and order being able to decide their own political and religious arrangements. It had global consequences.  The treaty of Paris 1783 ended the American Revolution and recognized the independence of the United States. The treaty of Ghent signed on December 24, 1814, ended the war between Great Britain and the U.S. that started in 1812. The Congress of Vienna 1815 after the Napoleonic Wars reshaped Europe.

However, other agreements have not been universally accepted or are controversial or have been disregarded and ignored.  The U.S.  has had varying relations with Native Americans, among them friendship, assimilation, exile, near genocide, resettlement, and treaties whose boundaries were often upheld by the U.S. Senate.

High on the list would be the agreements between the U.S. and Native Americans that have been broken. Perhaps the most notable is that in 1868 signed at Fort Laramie recognizing the Black Hills of Dakota as the Great Sioux Reservation, the exclusive territory of the Sioux and Arapaho people. After gold was discovered in the Black Hills, settlers and gold miners moved into the land. Controversy continues this and over Mount Rushmore, the colossal sculpture of four presidents on the granite face of the rock, which attracts more  than two million visitors a year, but which some Native Americans see as a desecration of lands considered sacred by the Lakota Sioux.

Other arrangements have been controversial. The treaty of Versailles signed on June 28, 1919, formally ending World War I between Germany and the Allied Powers and leading to the creation of the League of Nations, was never ratified by the U.S. Senate. Others held that the “war guilt” clause in the treaty, that Germany was to accept responsibility for all losses and damage incurred as a result of its aggression in the War, that it should lose its colonies, that the German army should be limited, and Germany should pay a large sum of reparations, was too punitive.

Other agreements have been disregarded or interpreted in controversial fashion. Among them are the 1978 Camp David Accords, not implemented by Palestinian Authorities, and the treaty of Sevres 1920, superseded by that of Lausanne in 1923, that promised a homeland for the Kurds.

The question of adherence to or breaking of promises has been at the forefront of the crisis, indeed the central factor, over claims by President Vladimir Putin and his declaration that the U.S. and NATO, in the last days of the Cold War, agreed  not to accept membership applications from former Warsaw Pact nations, especially Ukraine. The basis for this point of view rests on conversations after the fall of the Berlin Wall on November 9, 1989, and statements made by James Baker and German Chancellor Helmut Kohl.

Coincidentally, documents recently publicly available indicate assurances given regarding the security of the Soviet Union while the process of German unification was being discussed and taking place.  The most well-known and controversial one is the assurance by then Secretary of State James Baker to Mikhail Gorbachev on February 9, 1990 that NATO’s jurisdiction would not “shift one inch eastward from its present position.” He used the words, “iron clad guarantees that NATO’s jurisdiction or forces would not move eastward,” but after some discussion within the U.S.  administration eliminated the word “jurisdiction,” and never again spoke of NATO “not expanding eastward.”  At the same time, Chancellor Kohl stated that “naturally NATO could not expand its territory to the current territory of the GDR.

Baker did agree to a commitment to allow Soviet troops in east Germany to remain for a transitional period, and not call for extension of NATO forces into that territory until they left, but this was not a statement or promise that NATO forces should not extend east.

The context was that negotiations were taking place, after the fall of the Berlin Wall in 1989, over the  unification of the two Germanies. On January 31, 1990, West German Foreign Minister Hans-Dietrich Genscher announced in Tutzing, Bavaria, that changes occurring in that unification process must not lead to an impairment of Soviet security interests. Hence, NATO should not expand its territory    towards the east, “moving it closer to the Soviet borders,” nor incorporate East German territory in NATO in any future unified Germany, the Federal Republic of Germany. This special status for the GDR, German Democratic Republic, 1949-1990, territory was not part of the German unification treaty of September 12, 1990 but was mentioned in conversations between Soviet and Western figures. Gorbachev agreed to German unification in NATO after assurances by Western leaders, particularly Helmut Kohl, that the USSR “can share and be part of the new Europe.”

Within the U.S. administration there were differences between the Defense department and State department over NATO expansion. Commentators differ: some argue that the pledge not to enlarge NATO was a myth; others that Gorbachev was misled by the U.S.

In any case, Gorbachev later said that the decision made by NATO in 1993 to expand to the east was a violation of the spirit of the statements and assurances made to U.S. in 1990 that NATO would not go further east after the GDR  was incorporated into West Germany, the FDR. Others asserted that the West gave the Soviet Union the impression that NATO membership would not be given to   Poland, Hungary, or Czechoslovakia.  The GDR did not join NATO.  It ceased to exist and became part of the Federal Republic of Germany. Logically, the reality is that a former Warsaw Pact nation was not incorporated into NATO.

It is true that there were conversations and seeming assurances on the issue, but no official treaty was ever signed, nor any official U.S. declaration that NATO would not expand. The issue was part of the general problem of the merger of the GDR into the Federal Republic.  In any case, circumstances changed with the agreement in 1997 between former Warsaw pact members and NATO ended in agreement with Moscow, and the admission of Poland into NATO.  If there ever was a promise, it was renounced by this act.

The opposite is true, in December 1994, Russia signed the Budapest Memorandum on security assurances, which included assurances against treats or use of force against the territorial integrity or political independence of Ukraine., Belarus, and Kazakhstan. Moscow stated it would respect the independence and sovereignty and the existing borders of Ukraine, but it breached the agreement when Russia annexed Crimea and sponsored military forces in east Ukraine to fight against the Ukrainian government.

Putin’s hypocrisy in March 2014 on his aggressive action and violation of his agreement is revealing.  For him, the context of Ukraine had changed. “A new state arises, but with this state and in respect to this state, we have not signed any obligatory documents.” James Baker would have been amused.

PrevA press release from Anjem Choudary: The Hijab is a symbol of the superiority of the Muslim woman!
Against Identity PoliticsNext