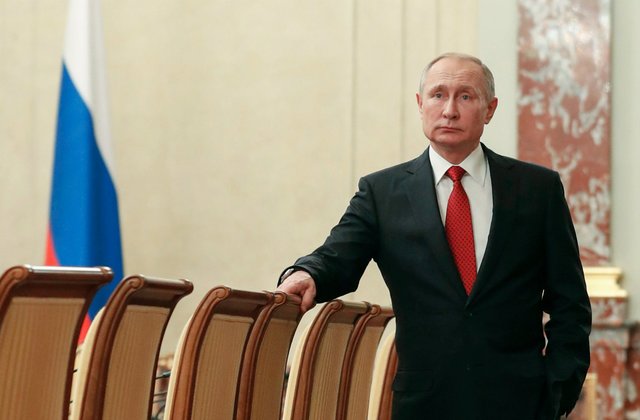 In early March, President Vladimir Putin appeared to bestride his country like a latter-day czar. But by mid-May, the former KGB agent of a vanished Soviet Union, now autocrat of all Russia, looked battered if not besieged.

Putin has ruled since 1999, first as prime minister, then as president. Potential rivals have been marginalized, exiled or killed. But a referendum on a constitutional change approved 383-0 by the State Duma (lower house of the legislature), scheduled for April, has been delayed. The proposal would allow Putin to serve two additional six-year terms after his fourth period in office ends in 2024.

At the same time, a gigantic sinkhole opened in the Russian economy.

First, the novel coronavirus pandemic and the COVID-19 disease it causes hit a Russia already “in a weakened state. Its longest stagnation in modern history—an average of about one percent growth between 2009 and 2019—has eroded incomes,” writes Leon Aron of the American Enterprise Institute.

Second, Putin launched a “disastrous oil-price war” with Saudi Arabia in March, just as the pandemic destroyed global demand for petroleum. According to Aron, director of Russian studies at AEI, “neither the economy nor the ruble is likely to recover soon.”

Revenue from oil and natural gas production and sales comprise one-third of Russia’s national budget. The ruble already has lost one-fifth its value against the dollar, according to news reports, making it one of the world’s worst-performing currencies.  GDP is forecast to shrink 5.5 percent in 2020, the steepest decline since 2009.

Also on the horizon, after an abnormally warm and dry winter, potentially record-setting spring and summer wildfires in a country half-covered by forests. Last year’s fires burned seven million acres—an area larger than Maryland—and sent smoke as far as Canada and the United States.

The problem for Russia, and for Putin, “is that he has no place to go.” To remain the strongman, Putin must grip power even more tightly, says Kevin D. Williamson. The Russian president “murdered his way to the top and has used murder to stay there. The list of his victims has more characters than War and Peace. His critics and rivals come to ugly ends.”

The list might be growing. Three doctors who publicly criticized the government’s response to the new coronavirus fell from hospital windows. Two died, one suffered a fractured skull, The Wall Street Journal reported early this month.

Paul Joyal, a participant in the Jewish Policy Center’s December, 2017 panel on Russia, said the Kremlin employs organized crime groups based primarily in St. Petersburg to conduct cyberattacks on American and European targets. Joyal, managing director of law enforcement and public safety practice at National Strategies (NSI), said these groups also engage in human trafficking, assassinations and other crimes. Further, they serve as a “source of black cash for the government” and provide a layer of deniability regarding crimes committed on its behalf.

Putin’s regime is “a fragile and petrified system” unable to reform, said Anders Aslund, a senior fellow at the Atlantic Council and economic advisor to the Russian government in the 1990s. Speaking to the JPC’s 2017 panel, Aslund charged that “massive corruption at the top” by Putin and his cronies sends at least $10 billion to $15 billion and perhaps as much as $35 to 40 billion annually to foreign accounts. Washington should “go after the money,” including $50 billion or more allegedly tied to Putin.

Nevertheless, in the view of the AEI’s Aron, “there is enough resilience in the Russian political system, and people are too preoccupied with surviving to take to the streets. There is little doubt, though, that this is going to be the toughest challenge President Vladimir Putin has faced in his 20 years in power.”

Even before the pandemic and collapse of the oil market, Emil Avdaliani was suggesting today’s Russian regime—like imperial and Soviet predecessors—could be susceptible to disintegration. Writing for the Begin-Sadat Center at Israel’s Bar-Ilan University, Avdaliani considered Russian defeats including the late 16th-early 17th centuries’ “Time of Troubles”; end of the Romanov dynasty in 1917; and 1991 breakup of the Soviet Union.

“[T]hese Russian defeats were not military. Their major cause was internal economic weakness coupled with military inefficiency that had grown over decades,” said Avdaliani, who teaches history and international relations at Tbilisi State University and Ilia State University in Georgia. “All these precedents have one thing in common: Russia’s economic underdevelopment caused  internal instability and a subsequent change of systems.”

Russia, population 145 million, fields the world’s third largest military, after the United States and China. But it does so on the back of only the 11th largest economy, according to 2019 figures from the International Monetary Fund.

After Russia and/or Russian-backed forces invaded eastern Ukraine in 2014, the United States and European Union imposed economic sanctions. These nearly barred Moscow from international financing and might, according to IMF estimates, cost the country one to 1.5 percent in gross domestic product annually.

Aron noted that “around 50,000 people protested on an August [2019] weekend in Moscow. Also, there are hints in the Russian media that the domestic elites are starting to talk about possible solutions to the country’s foreign and internal crises. If the elites are openly discussing different scenarios, we can infer that there has been a shift in perception among the Russian public—an indicator that the country is facing serious problems.”

Putin’s approval rating stands at 59 percent, according to a recent public opinion survey by the independent Levada Center. This figure would be enviable for democratic politicians, but it’s an all-time low for the Russian leader. He hovered around 80 percent for the four years following Russia’s 2014 seizure of the Crimea from Ukraine.

Avdaliani said a new Western “containment policy against Russia would bring results—not necessarily because of America’s economic and military strength, but because of Russia’s inability to reverse internal economic downturns” and build a powerful military comparable to “the rising Chinese and already established American armies. …[T]he regime is savoring its victories against Georgia and in Syria, its annexation of Crimea, and the war in Ukraine while disregarding the country’s real challenge—its technological, military and economic underdevelopment.”

Putin’s Russia believes the “color revolutions” that overthrew authoritarian leaders, some of whom were Moscow’s clients, in Ukraine, Georgia, Kyrgyzstan, Lebanon and the 2011 “Arab spring” were all “U.S. conspiracies,” according to Blank. On an April 14, 2020 Jewish Policy Center conference call, Blank said such suspicion drives Putin’s attempt “to thwart U.S. interests wherever possible.”

Russia’s oil war rebuff by Saudi Arabia, backed by America, amounted to “a major defeat,” said Blank. Putin’s gamble to drive the Saudis out of key energy markets “lost billions of dollars” for his country.

Blank recalled that Putin in 2005 labeled the implosion of the Union of Soviet Socialist Republics “the greatest geopolitical catastrophe of the century.” His regime’s actions, whether in arms sales, energy and diplomacy, dispatch of military forces—as currently to Syria and Libya—or information warfare including that directed against the United States and other Western democracies, should be seen as part of an overall policy. The objective is to regain Russia’s great power influence lost with the Soviet collapse.

Information warfare, including psychological and propaganda aspects, fits into Russia’s understanding of cyberspace as a decisive front. In an oft-cited 2013 article, Gen. Vladimir Garasimov, chief of the military general staff, wrote “nonmilitary means of achieving military and strategic goals have grown and, in many cases, exceeded the power of weapons in their effectiveness … The information space opens wide asymmetrical possibilities for reducing the fighting potential of the enemy.”

When U.S. President Barack Obama in 2014 called Russia a “regional power” that seized part of Ukraine out of weakness, not strength, he infuriated Russians and their leader. This goaded the Kremlin to intensify its efforts to undermine U.S. interests, Blank said.

A working relationship between Putin and Israeli Prime Minister Benjamin Netanyahu, especially dealing with Israeli attacks against Iranian deployments in Lebanon and Syria, is “purely tactical,” according to Blank. “Russia deters Iran from provoking Israel [and] always has been opposed to Iran having nuclear weapons. But Moscow also enables Iran, selling weapons to it and its dangerous surrogate, Hezbollah” (the Shiite Muslim “Party of God” in Lebanon).

Russia’s objective, he added, is not Middle Eastern stability but rather to induce all parties to treat Moscow as their key mediator by fanning existing conflicts and inciting new ones.

Though Russia’s defense minister declared in 2005 that his country was waging war on NATO, Blank does not think it can afford great power adventurism and says it already must accommodate itself to China. He believes that Moscow, even after an “impressive” military modernization, cannot deny U.S. forces access to European NATO allies or NATO’s movement to an eastern European front facing Russia. If miscalculation precipitated armed conflict, Russian troops could “inflict immense damage” on NATO but not defeat it, Blank says.

When evaluating Putin and Russia, U.S. policy makers should “not project our own values and thinking” onto them, Blank cautions. That’s because their Russian counterparts see their country “at war with the West.”

To understand Kremlin policy under Putin, Western governments should turn “not to the speculations of foreign-policy ‘realists’ like Henry Kissinger or Zbigniew Brzezinski but to [Fyodor] Dostoyevsky’s novels,” according AEI’s Aron. Reviewing Moscow social science Prof. Sergei Medvedev’s new collection of essays, The Return of the Russian Leviathan, Aron says they show how Putin “has returned Russia to a corrupt, oppressive and illiberal past.

“The state—the ‘Leviathan’ of the title—has been steadily extirpating all vestiges of Mikhail Gorbachev and Boris Yeltsin’s revolutions of the late 1980s and 1990s: uncensored media, fair courts, real political competition, freedom of speech, government transparency and, most of all, a civil society independent of the Kremlin. Meanwhile, a new ruling caste of security officers-turned-racketeers surpasses the Soviet nomenklatura in corruption, rapacity, hauteur and the shameless display of wealth.”

Rather than follow a guiding ideology, Putin’s regime indulges in a mythology whitewashing the Soviet past, rehabilitating Josef Stalin, promoting self-pity, a “passion for suffering” and a search for the traitors who sabotaged the U.S.S.R. It “justifies imperial ambitions and the state’s priority over the individual in the allegedly eternal clash between Russia and the West.”

The author is communications consultant at the Washington, D.C.-based Jewish Policy Center and author of Jews Make the Best Demons: “Palestine” and the Jewish Question, New English Review Press, 2018.