That is the headline from the Hindu Post. The left wing Independent says “Indian fugitive Zakir Naik arrives in Qatar to give talks at Fifa World Cup”

Qatar has invited terror-accused absconding Islamic preacher Zakir Naik to deliver religious lectures during the 2022 football World Cup. Several reports and verified twitter accounts confirmed that Naik has been invited as a ‘dignitary’ to deliver sermons to spread the message of Islam during FIFA World Cup 2022.

Naik had refused to call Osama Bin Laden a terrorist, and also defended a Pakistani temple bombing by arguing that Islamic countries had to forbid the building of temples.

Zakir Naik fled Bharat in the wake of Dhaka cafe terror attack of July 2016. He is accused of spreading hatred, funding terror and money laundering. He has found refuge in Muslim-majority Malaysia which has granted him permanent residency.

He was also banned by Theresa May in the UK when she was home secretary, after he praised Osama bin Laden and said “all Muslims should be terrorists”. I also seem to remember a little ‘difficulty’ in the Maldives.

Qatar, especially its state-sponsored media outlet Al Jazeera, has been at the forefront of the narrative war targeting Bharat and Hindus for alleged atrocities against Muslims, whereas the ground reality in the entire subcontinent is completely opposite. 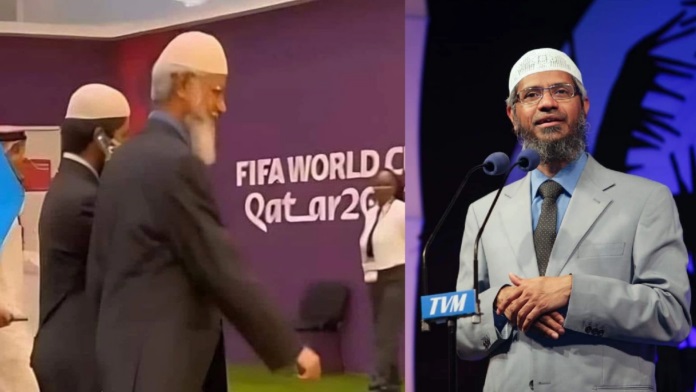 Mr Naik’s presence at the controversial World Cup has triggered outrage among several people in India and is expected to spark fresh tensions with the nation following a diplomatic row in June over India’s ruling party member’s inflammatory comments against prophet Muhammad.

Thousands of migrant workers and their families, mostly from Bharat and other subcontinental nations, are demanding compensation from FIFA and Qatar authorities for abuses, including unexplained deaths, that workers suffered preparing for the 2022 World Cup. As per one estimate, at least 6750 workers have died (2711 from Bharat) while building stadiums and other infra for the sporting event. Qatar continues to drag its feet on the matter, and is silent on the question of compensation.

The discrimination, exploitation and denial of basic rights to migrant non-Arab workers is an issue that plagues the entire Middle East. While Hindus are denied freedom of religion and many languish in the region’s jails for alleged ‘blasphemy’ and other crimes, even subcontinental and African Muslims are treated as lesser humans in the region where Islam originated.

It comes as Indian vice president, Jagdeep Dhankhar embarked on a two-day visit to Qatar on Sunday to represent India at the World Cup. The Independent has reached out to Fifa organisers in Qatar for a comment.