From Middle East Eye. Although according to the Metro   protestors and fantasists and ‘Fixated’ people who believe they are the rightful heir to the throne are also being monitored as cause for concern.

UK police officers have quizzed Muslim men convicted under terrorism legislation on their views of Queen Elizabeth II’s death and urged them to avoid central London during her state funeral on Monday, Middle East Eye has learned. Middle East Eye has reached out to the Metropolitan Police for comment, but had received no response at time of publication.

At least half-a-dozen men, convicted for non-violent offences under the Terrorism Act, were either visited or called by Greater London’s Metropolitan Police counterterrorism command (SO15) this week over their plans on the day of the queen’s funeral, according to human rights advocacy group Cage.

In one instance, a plain-clothed SO15 officer visited the home of one of the men earlier this week, whose elderly mother told the officers that her son was at work.  The officers then intended to turn up to the man’s workplace over an “urgent matter”, before agreeing to meet at a local police station. There, they asked him about his views on the queen’s death and his plans for the state funeral on Monday.

“I was alarmed by the unannounced police visit to my home. My mother, who’s extremely ill, was visibly shaken as she thought she will lose me again,” he said.  “For it to be all about the queen’s funeral felt so unnecessary. I’ve rebuilt my life and have been compliant with all conditions placed on me for many years. The police should respect that.”

MEE has seen a letter written by Cage to Richard Smith, the head of the Metropolitan Police counterterrorism command, raising concern over the issue. “While public safety is of course paramount at such public events, such actions seem excessive in light of the already stringent conditions placed upon such individuals in their monitoring and reporting obligations,” the letter states.  “The targeting of these individuals – in absence of an evidence-based assessment of immediate risk of committing violence – amounts to police harassment.”

In the letter, the advocacy group asked the Metropolitan Police to clarify if the visits were limited only to individuals on notification requirement under terrorism legislation, and if it only impacted Muslim offenders.  No, as stated above, protestors and fantasists are also being watched.

Because we don’t yet know if Muhammad Khan is a jihadi terrorist, a protestor or a fantasist. But he certainly caused a disturbance.

“Muhammad Khan, 28, of Barleycorn Way, Tower Hamlets, was charged on Saturday, September 17, with an offence under Section 4A of the Public Order Act; behaviour intending to cause alarm, harassment or distress.” 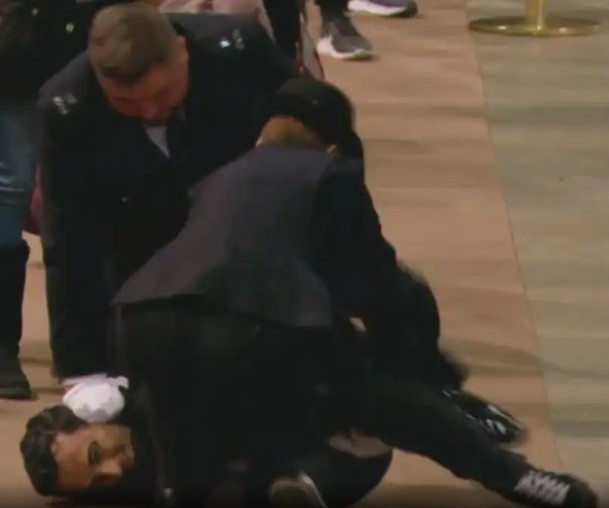 Witnesses described how the man rushed up to the coffin and grabbed the Royal Standard that is draped over it, before he was tackled by police “within seconds”.

One witness told The Sun: “We thought someone had fainted and then we heard someone shriek. Someone got up to the coffin, grabbed the flag and pulled it upwards. They picked up the bottom and wafted it, almost to see what was underneath. It happened so fast. . . It’s such disrespect to the body. Just not what you thought you would ever see.”

In other news, only a mile or so away another Mohammed, this time a Mohammed Rahman, believed to be of North African origin has, in this report from the Guardian,

been charged with attempted murder and grievous bodily harm with intent after the stabbings of two police officers in Leicester Square on Friday, the Metropolitan police have said.

Police said on Friday that the stabbings in central London were not being treated as terror-related. But they always say that. He had not one but two knives; producing the second from down his trousers as police disarmed him of the first. The male officer was stabbed in the neck, the female in the arm. This was the more serious injury due to the particular vein severed and the resulting massive blood loss.