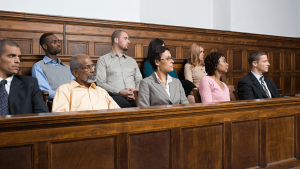 The lawyers for Ghislaine Maxwell are pressing for a retrial on the grounds that one of the jurors failed to reveal before selection for the jury that he had been sexually abused as a child by his step-brother and a friend. Of course, he should have answered the question truthfully: The problem is that he should never have been asked it in the first place, for to ask such questions is to undermine the very basis of the jury system.

That system supposes that the average citizen, chosen at random, is capable of judging the guilt or innocence of an accused solely on the basis of the evidence presented in court. To do so is the purest example of attempted cognitive rationality. Indeed, the judge tells the jury that they’re to consider only what they see and hear in court, that they’re to put all other information, rumor, or prejudice from their minds. If it were not possible for them to do so, then the whole system would fall to the ground.

My experience, as a witness in murder trials in England, suggests to me that most people are capable, when it’s demanded of them, of judging solely on the evidence put before them. As with any system that involves human beings, there must be exceptions and failures: Perfection is not to be expected. But in none of the trials in which I was involved did the jury come to a perverse verdict that flew in the face of the evidence put before them. Relevant evidence may sometimes have been missing or withheld from them, affecting their verdict, but that was not the fault of the jury.

In some ways, the fact that the jury usually got it right, or was not perverse even where I disagreed with their verdict, surprised me. In the old days, before my time as a witness, juries were mainly composed of respectable and educated citizens who, aware of the solemnity of the occasion, dressed smartly and seriously; by the time I worked as a witness, juries were composed of those who could not claim an excuse not to perform jury duty, that is to say the more highly educated members of the community, and used to turn up as if just popping out for some milk on a Sunday morning after a Saturday-night debauch, the men unshaven, the women in flannel tracksuits, and so forth.

Some of them looked frankly gormless: How, I thought, could they possibly follow the arcane points that were being argued before them? (In fact, the judges were always highly skilled at reducing complex questions to their essentials, it requiring greatly more intellect to make the obscure clear than the clear obscure.) Some of the jurors looked bored, even annoyed at having been called. And yet, in the end, the jury’s verdict was always reasonable.

To inquire deeply into the background of potential jurors is implicitly an insult to the capacity of the general population, for it suggests that it’s not mentally or emotionally capable of attending to evidence more than to its prejudices. Moreover, the intention is to procure a jury that’s more likely to be favorable to one side or the other, the defense or the prosecution. This is quite wrong.

Let us suppose that my house has been recently burgled. It may be presumed that I’m not very favorably disposed to burglars as a class. But when I’m on a jury called upon to give a verdict on the case of an alleged burglar, I’m asked to judge not the class of burglars in general, but this man in particular. It would be a grave insult to me to suggest that I neither could nor would make the distinction.

In like fashion, is a man who was abused in childhood really supposed to be incapable of judging many years later whether or not Ghislaine Maxwell was guilty of what she was accused? This is to assume a psychological fragility and cognitive incompetence that, if they become widely accepted as the norm, becomes a self-fulfilling prophecy in the culture at large. If you assume that everyone is made of eggshell, everyone will soon behave as if one were made of eggshell. Psychological resilience or toughness derives not only from individual temperament, but also from cultural expectations.

How many characteristics must a juror share or not share with an accused before he can render a true judgment according to the evidence before him?

Against this, it might be argued that, in practice, if juries in America were not carefully sifted, they would simply find verdicts in accordance with their various prejudices. But this is self-contradictory: for juries are sifted according to the prejudices either the prosecution or the defense assumes them to have. By the very act of questioning them closely, apart from on whether they have any personal connection to the accused, it’s assumed that they’re incapable of acting as a citizen only, as citizen simpliciter.

If it were really true that citizens were incapable of disregarding their prejudices and attending only to the evidence put before them, and that this was an ineluctable social and psychological law, it would be an argument for abandoning the jury system altogether: for the idea of 12 good men and true (now good men and women) would be an impossible dream.

This is a very pessimistic view of human potential, above all in America. Are its people really so ideologized in their minds that they can’t be relied upon to be dispassionate for the duration of a trial? And, if so, what does it tell us about the future of the country? Among other things, it implies that people have no faith either in the laws that have been made and as they stand, or in the way that they have been made, and that in effect their own opinions are law for them.

The juror in the Maxwell trial was wrong to answer untruthfully (or carelessly, as he claims). But in my childhood, I was always told that if I asked a silly question, I would get a silly answer. Likewise, if you ask a bad question, you must expect bad replies.