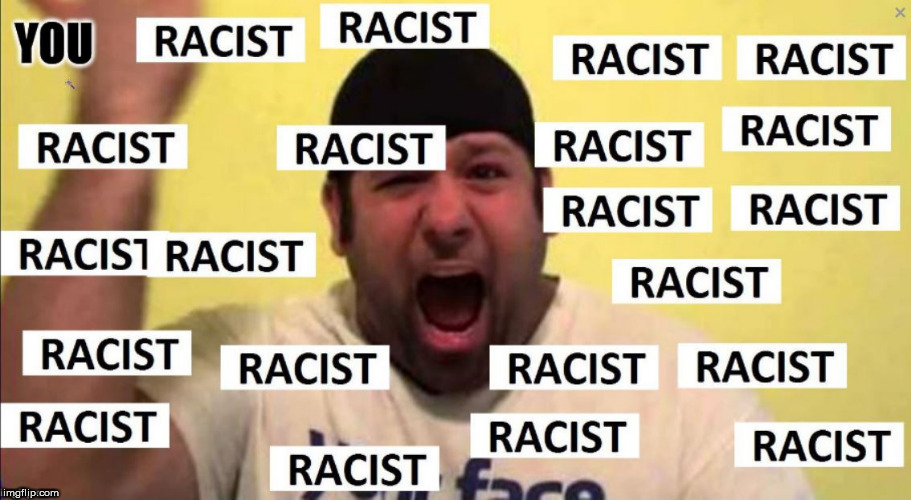 Patriotism, Samuel Johnson observed of self-promoting politicians nearly 250 years ago, is the last refuge of the scoundrel. Targeting opponents as communists—often without evidence—was Sen. Joseph McCarthy’s (R-Wis.) blunt instrument of choice in the 1950s.

Lodged snugly between them are those making today’s indiscriminate accusations of “racist!” Only their privileged vocabulary makes these left McCarthyite scoundrels sound new.

When a white person who denies being a “racist!” can be convicted on the evidence of his or her denial, then all whites are racists. The corollary implies that no black person who accuses a white of racism can be guilty of racism. Deeply superficial best-sellers confirm it.

Note to copy editors: Do not capitalize Black and lower case white. Forget about media  Newspeak in this matter, as decreed by the once highly credible Associated Press. It’s African-American, upper case; black, lower case. Caucasian, upper case: white, lower case. Indian, up; a person from India, down. Equal justice under grammar.

Speaking of Newspeak, today’s infallibility of those deploying “racist!” obviously inverts yesterday’s white supremacism. It loudly echoes George Orwell’s satire of Stalinist dictatorship, Animal Farm. Readers who received a liberal arts education prior to the 21st century, when the term became an oxymoron, will recall that on the farm “all animals are equal, but some are more equal than others.”

America’s current social upheaval, ostensibly over “systemic racism,” actually is about every society’s perennial question: Which elites will rule and how will they be selected?

“Race” is, as the left insisted until the day before yesterday, a social construct. More than six percent of Americans have told recent censuses that they are multiracial. Regardless, the human genome is 99.9 percent identical for everyone, white, black, White, Black, Asian, Hispanic (“may be of any race,” according to the Census Bureau), Native American Indian, Pacific Islander and your mad Uncle Harold.

Portland, Oregon’s nightly demonstrations and riots morphed quickly from protests over the police killing of George Floyd in Minneapolis to attacks on installations of the U.S. government and toppling a statue of George Washington. Graffiti on the monument labeled Washington a “genocidal colonist,” adding “f— cops.”

Such sentiments and actions, replicated across the country, echo The New York Times’ “1619 Project.” This series of essays relocates America’s founding from 1776 and the revolutionary “we hold these truths to be self-evident, that all men are created equal” to 1619 and the arrival of the first black slaves in colonial Jamestown, Va.

In other words, the United States was born in sin, remains intrinsically flawed by “systemic racism” and must be fundamentally transformed—by those for whom “racist!” is the ultimate and always appropriate malediction.

Princeton University historian Allan C. Guelzo calls the “1619 Project” a “once-cause-explains-all” conspiracy theory on the order of 1903’s Russian fabrication The Protocols of the Learned Elders of Zion. The Protocols infamously attributed all the world’s ills to a Jewish cabal and ultimately helped spark the Holocaust.

But such is the self-demoralization of America’s liberal elites—combined with an anti-democratic left’s determination not to let the current crisis go to waste—that “1619” won a Pulitzer Prize. It is being incorporated in countless school curricula.

Ayaan Hirsi Ali, who fled the tribalism of her native Somalia, escaped Saudi Islamic fundamentalism, and whose resonant free speech proved too much for self-professed enlightened Dutch authorities, has found refuge in America. Cognizant of this country’s faults, she nevertheless describes it as the best place to be a black person.

Those who doubt the illiberalism underlying too much of today’s anti-racism protests should consult Black Lives Matter! Inc.’s 70-page 2016 manifesto. They will find it anti-capitalist, anti-family and anti-Jewish, among other things. Some BLM leaders acknowledge their post-Soviet Marxism.

Is the United States of America—nearly 60 years after the Civil Rights Act of 1964 and Voting Rights Act of 1965—still in thrall to white supremacy and in need of “a fundamental transformation”? Or is it mankind’s last, best hope, as Abraham Lincoln asserted?

Statues of Lincoln as well as of Washington have been defaced by those who insist on the former. If there remains a silent majority that believes the latter, it’s getting late to speak up. Today’s neo-Marxists’ substitution of “racist oppressor” for “capitalist oppressor” doesn’t change the way the arc of their history bends: through cancel-culture to re-education camps and ultimately mass graves.

The writer is a communications consultant in Washington, D.C. and author of Jews Make the Best Demons: “Palestine” and the Jewish Question, New English Review Press, 2018. Opinions expressed above are solely his own.

PrevHashem Abedi, brother of Manchester Arena bomber, refuses to appear in court
Self-Suppression in the Age of Cultural AppropriationNext