A 31 year old Syrian refugee has been arrested in connection with three attacks on the Jewish community in Graz in southern Austria.

The first attack took place around 11pm on August 18 when Graz’s synagogue was graffitied with the words “Palestine is free” and “Our language and our land are red lines”. 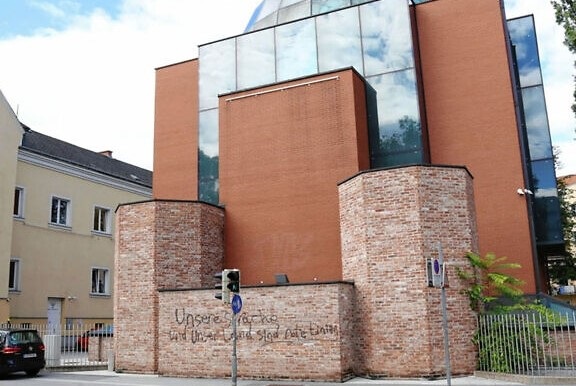 At approximately 11.30pm on August 21, a stone was thrown through a window on the north side of the synagogue.

Elie Rosen, president of the Jewish Community of Graz. . . had been warned that the Austrian city faced “a stronger left-wing and anti-Israel anti-Semitism,”

The next day, Mr Rosen was threatened with a wooden club when he caught the accused about to smash in the synagogue’s windows. Mr Rosen told the JC he approached the synagogue in his car at about 6pm on August 22 and saw a man in a baseball cap with pieces of concrete.

Mr Rosen approached the man, who threatened him, hitting the community president’s car. Mr Rosen told him to stop. No other words were exchanged. The suspect was seen and photographed by two bystanders before fleeing on his bicycle.

The wall that the Islamic attacker had vandalized was made out of bricks from the ruins of the original Graz synagogue that had been destroyed by the National Socialists. The synagogue, which had been rebuilt only two decades ago, serves Graz’s tiny surviving Jewish community.

Austria’s interior ministry confirmed the arrest on Monday of a 31 year old man. Unemployed, he is a Syrian citizen who arrived in Austria as a refugee in 2013. He is also suspected of having vandalised the headquarters of a Graz LGBTQ association and a Catholic church last week.

When the police caught him, he expressed no remorse. The Syrian Muslim refugee justified his actions by citing his religion: Islam, and Islamic law. Austria’s interior minister, Karl Nehammer, ascribed an “Islamist motive” to the attacks, calling the suspect a “radical Islamist antisemite” and “homophobe”.

There were a total of seven attacks committed by this single refugee. This has become the new normal in Graz, an Austrian city the size of Pittsburgh, which has seen a surge in violence.

The mosques of Graz have been used to recruit Islamic State terrorists. Some of ISIS’s killers died in its wars against its enemies, but others came back and are living in Graz. After multiple police raids and arrests that involved as many as 800 officers, part of the network of ISIS and al-Qaeda recruiters was broken up, only to be reunited in prison.

A Muslim Brotherhood prison imam from Graz who was brought in to help deradicalize some of the prisoners instead plotted a jailbreak by the terrorists.The Brotherhood imam had planned to have the terrorists pray in the yard as a distraction, and then attack the guards with shivs.

The situation is so bad that Austria’s top prison imam wrote a book warning that the prison system was a breeding ground for terrorists and urged putting Islamists in solitary confinement. One of those prisoners, an Albanian Muslim from Graz, has been accused of continuing to recruit for ISIS from prison using a smuggled smartphone and his Instagram account.

A survey of Muslim refugees in Graz conducted by a professor of Islamic Religious Education at the University of Vienna found that about half of them had strongly anti-Semitic views. He also noted that a number of Graz mosques were controlled by the Muslim Brotherhood.

The Austrian authorities are trying to belatedly withdraw their asylum to the Syrian refugee who attacked the Graz synagogue.

The Austrian government has announced that it’s dispatching uniformed and undercover police officers to protect the country’s handful of Jewish synagogues. But the anti-Semitic violence is part of a larger trend of Islamist attacks against both churches and synagogues. And against the symbols of non-Islamic values and political life.

Mr Rosen also suggested additional funding for the community’s educational programming concerning antisemitism and support for its campaigning against BDS, criticising the Communist Party’s (KPÖ) support for the movement.

Graz passed an anti-BDS resolution in November 2019 with votes from all parties save the KPÖ, the second-largest party on the city council. The attacks, Mr Rosen said, demonstrated Graz’s acute problem with anti-Israel antisemitism.