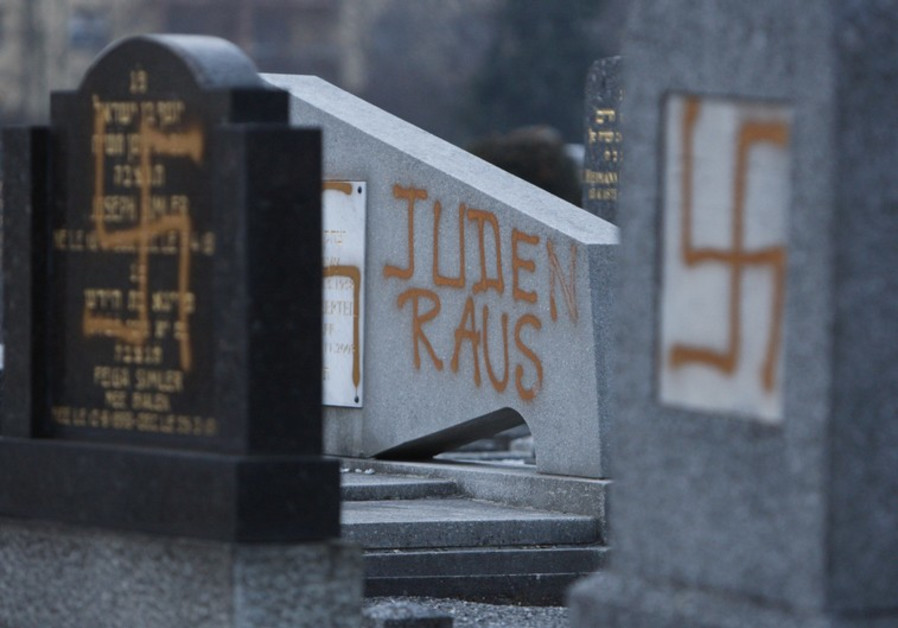 On October 28, a gunman shouting “all Jews must die,” murdered 11 worshippers in a Pittsburgh synagogue. He’d previously posted on social media that “Jews are the children of Satan” along with a cartoon depicting the United States as controlled by “Z.O.G.”—Zionist occupied government.

A few days later Nation of Islam leader Louis Farrakhan, who gleefully taunts the “satanic Jews” and “devilish Zionists,” turned up at rally in Iran highlighted by the usual cries of “Death to America!” and “Death to Israel!” the revolutionary Islamic republic’s perennial “Great Satan” and “Little Satan,” respectively.

Then, in November’s mid-term elections, three neo-Nazi congressional candidates ran as Republicans. They lost, but garnered 200,000 votes among them.

A number of Democratic candidates for state and congressional offices couldn’t be bothered by accusations of anti-Semitism. One, California state assembly hopeful Maria Estrada, said she “enjoys” listening to Farrakhan and claimed some other Democrats “turn a blind eye to the genocide against Palestinians and justify it by bringing up the Holocaust. … Anyone who believes they are one of ‘God’s chosen people’ automatically feels superior and justified in all they do.”

The Pittsburgh massacre horrified, but should not have surprised. As I assert in Jews Make the Best Demons: “Palestine” and the Jewish Question, published five days before the mass murder, the era of “Never Again!” is nearly over.

When it comes to Jews, to “the Jewish question” that agitated European thinkers and ideologues from the Enlightenment through the Bolshevik Revolution to the Holocaust, the West is experiencing a regression to the mean. That question, implicit when not explicit, is what the larger society should do about this tiny, often over-achieving and perpetually peculiar minority.

Regression has been underway since Israel’s escape from destruction in the 1967 Six-Day War. In response, Arabs and their Soviet allies—soon joined by the post-democratic left—began smearing Israel as racist and therefore illegitimate. First the Jewish state, now increasingly the Jews.

Neo-Nazi venom moves easily through social media. But more widespread in Western Europe and on American college campuses is Jewish state hatred from the far left.

British police investigate anti-Semitism in the Labor Party. Its chairman, Jeremy Corbyn, has befriended representatives of terrorist Hamas and Hezbollah. But more than a few Brits see in the focus on anti-Zionist anti-Semitism among Laborites a Jewish conspiracy to keep Corbyn from the prime minister’s post.

In America, at Oberlin College the Holocaust has been denigrated as “white-on-white crime,” a visiting Israeli professor at the University of Texas had to go about in disguise and students at San Francisco State University are suing the administration for chronic tolerance of sometimes threatening anti-Semitism. These are but three of many such examples,

Generational turn-over is one reason for anti-Semitism’s reemergence. The last Holocaust survivors and the last Allied troops who fought the Nazis are departing. People for whom anti-Semites sound like Nazis decline.

A second factor is the weakening of America’s post-World War II Judeo-Christian civic culture. A Washington Post survey found that voters self-identifying as religious “nones” jumped from 12 to 20 percent between the 2012 and 2016 presidential elections. The more secular fundamentalist a culture, the less likely it will tolerate  religiously-based claims in general, Jewish ones in particular.

A third, triggering cause takes advantage of the first two trends. This is ant-Zionist anti-Semitism. The keystone of the Arab-Soviet psych-war against Israel was the infamous 1975 U.N. General Assembly resolution equating Zionism—the national liberation movement underlying the state of Israel—with racism. Its 1991 repeal failed to neutralize the poison.

“Racism” is the ultimate malediction for the West’s increasingly “multiculturalist”—that is to say, anti-Western culture—intelligentsia. It functions, when it comes to the Jewish state and its supporters, as did the blood libel for Christian mobs in medieval Europe.

The ancient “Christ-killer” charge revived and appropriated, Israel stands accused of crucifying the post-democratic left’s new, collective Jesus, the Palestinian Arabs. Hence the ludicrous insistence by Palestinian spokespersons like Hanan Ashrawi that Jesus, a Jew from Judea, was a Palestinian from Palestine.

Ludicrous, yes. But many of today’s post-modern academics and journalists dismiss objectivity and truth—outside the hard sciences—as “hegemonistic constructs of the ruling class.” For them Palestinian Arabs have become the ultimate romanticized “Other,” Rousseau’s noble savage oppressed by Israeli imperialists.

Natan Sharansky usefully defined anti-Zionist anti-Semitism as resting on the 3-D’s: double standards, delegitimization and demonization. Demonization of the Jews began with ancient Greeks. In the West it was suppressed after the Holocaust, for a generation or so. It’s back.