Rhodes Did Not Fall 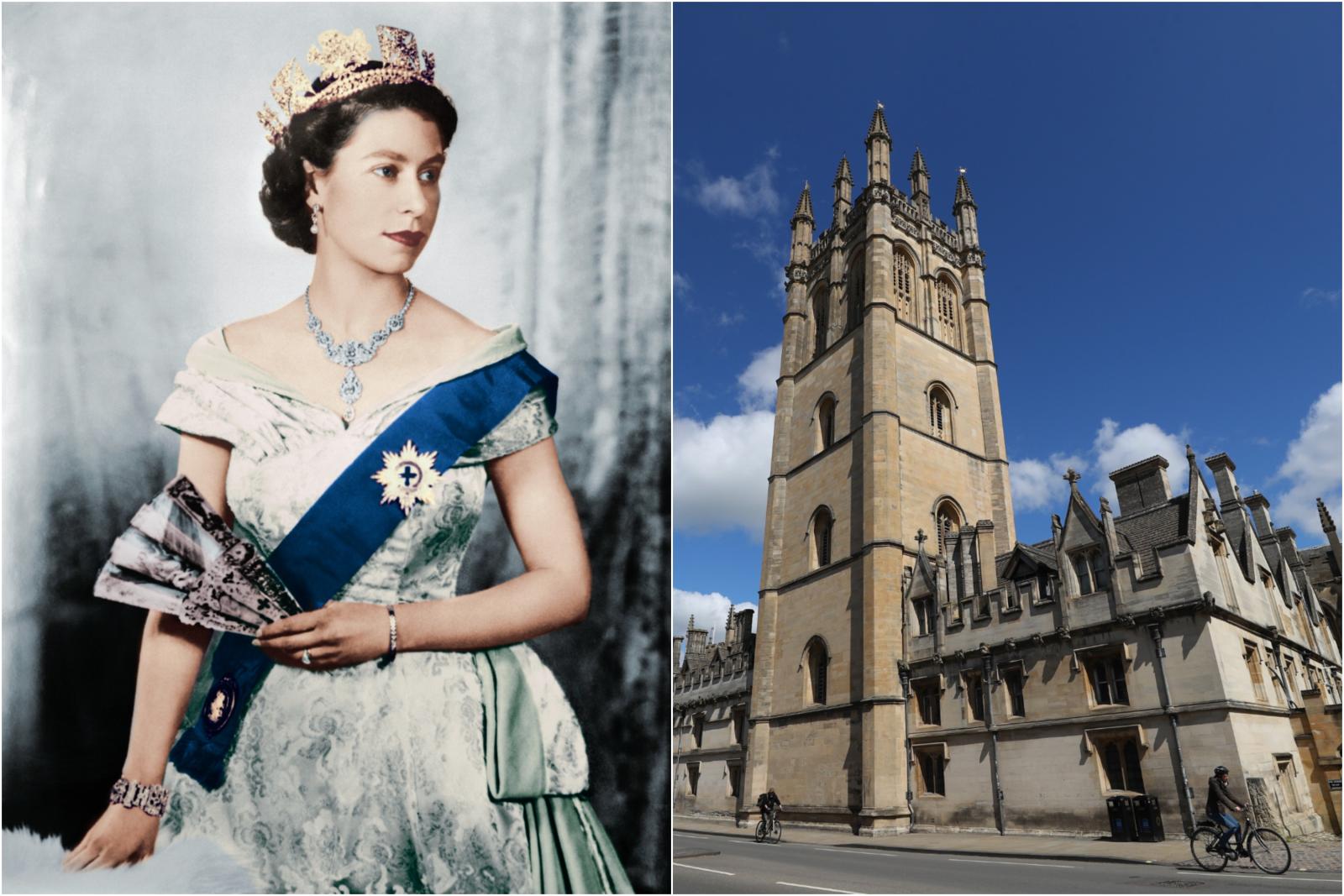 Oxford University used to be the home of lost causes. It has also become a home for woke causes. It still bears the shame of the Oxford Union motion, the “Oxford Pledge,” passed by 275-153 that “this House will under no circumstances fight for its king and country.” The motion was passed on February 9, 1933: on January 30, 1933, Adolf Hitler became Chancellor of the German Reich. A woke like motion at Oxford in June  2021 is a similar provoking, if not completely rejecting, of the older  generation and of traditional  institutions.

The cult of woke is spreading like a contagious virus, misconstruing past and present at Oxford and elsewhere. The members of the Middle Common Room MCR at Magdalen College, Oxford, passed a motion to take down an “unwelcoming” portrait, a print, of Queen Elizabeth II from the graduates’ common room because she “represents recent colonial history.” The portrait is of the Queen as a young woman, wearing a blue sash, symbolizing her role as a member of the Royal Victorian Order. The pretext for removing the portrait is supposed to be to create a welcoming, neutral place for all members of MCR, an organization of graduate students, regardless of background, demographic, or views.

The motion to remove the portrait was moved, perhaps with feline charm, by MRC president Matthew Katzman, a 25 year-old American lecturer in computer science, a student of complexity theory, who studied at Stanford university and whose father is a prominent American lawyer. His earlier schooling was in the elite and expensive Sidwell Friends School, which has been attended by the daughters of Presidents, Obama, Nixon, and Clinton. The motto of Sidwell is eluceat omnibus lux, but the Katzman light did not shine on all the MRC. Indeed, only 10 of the 250 members of MRC voted to remove the portrait.  This small minority seemed to believe that the portrait was an unnecessary addition to the common room, but its removal did not equate with any statement on Queen Elizabeth.

The most aggressive comment came from Kehinde Andrews, professor of black studies at Birmingham City University, and a member of the team that launched the first Black Studies degree in Europe. The Queen, he said, doesn’t just represent modern colonialism; she is probably the number one symbol of white supremacy in the entire world. Even in the removed portrait she is wearing jewels stolen from different parts of the black and brown world. Mr. Andrews is not new to controversy or definite opinions. Whiteness he believes is a psychosis, and “genocidal” capitalism must be overthrown. Britain, he has argued, was built on racism, and everyone involved in it probably has a really racist past. British imperialism has ruined many parts of the world. Winston Churchill, because of his treatment of Indians in 1943, is, he thinks, comparable to Adolf Hitler.

More objective observers, however, will regard  the action at Magdalen College by apparently woke students or jesters, as dishonorable in itself and an affront to the memory of the illustrious alumni of Magdalen who in relative recent history have included Oscar Wilde, King Edward VIII, actor Dudley Moore, and composer Andrew Lloyd Webber. Whatever their views on the placing or removal of the portrait, and on free speech and political debate, none of these celebrities would associate the Queen, the head of the Commonwealth of 54 states, almost all former territories of the British Empire, now an organization aiming at international cooperation between peoples all over the world, with colonialism or racism.

When will the woke cancel culture stop? Oxford colleges themselves are full of royal sculptures and art, and are available for toppling.  Magdalen College alone has portraits or sculptures of Queen Elizabeth I, Henry VIII, Prince Rupert, grandson of James I.  Are they all to be removed as have monuments to historic figures in recent months?  The University of Liverpool in UK agreed to rename Gladstone Hall, one of its buildings, following a campaign by students due to his alleged links with the slave trade: the links were that, as a young parliamentarian, Gladstone, who became prime minster four times, spoke once  in the House of Commons against the abolition of the slave trade because his family had slaves in its plantations in the 1800s.

In a less educated setting, a small coed secondary school, Howden Junior School in East Yorkshire, announced it would replace historical figures linked to Britain’s colonial past, slavery, oppression, racism, with modern heroes and role models. It would therefore no longer use as house names, Lord Nelson, Sir Walter Raleigh, and Admiral Francis Drake, because of their “despicable deeds which have been brushed under the carpet.” They are to be replaced by Swedish activist Greta Thunberg (18), footballer Marcus Rashford (23), Amanda Gorman (23) who read her poem at the inauguration of President Joe Biden, and Pakistani activist Malala Yousafzai (23). The Howden students may admire these new heroes, but is pertinent to observe that few of them appeared to know who the three replaced anti-heroes were.

The latest suspect to be removed from his pinnacle is J. M. Keynes, product of Cambridge by birth and education, author of fundamental works, The Economic Consequences of the Peace, 1919, and The General Theory of Employment, Interest, and Money, 1936, a man of the highest intelligence and  brilliance, and generally regarded, even by those with different opinions,  as the most important modern economist, one whose views have influenced economic policies to combat poverty and unemployment, and who  took part in negotiations shaping the international order after both World Wars.

However, Keynes was part of the Bloomsbury Group of early 20th century artists and writers which met at the Charleston Farmhouse in Sussex, the country home of Vanessa Bell, sister of Virginia Woolf, a place for discussion of intellectual issues including eugenics. The group presented Keynes as a believer in “racist” eugenic theories of human selective breeding, the “darker side” of his beliefs.  Keynes who died in 1946 was one of the intellectuals at the time who held strong views on eugenics.  He was chairman of the Malthusian League for family planning, and vice president of the British Eugenics society,1937-1944, and considered eugenics the most important and significant part of sociology. A key belief was that government control over the quality and size of the population was the key to a better society and crucial for those seeking to improve the material condition of the world. Above all, the quality of the population was all important and must become the preoccupation of policy.  It was necessary, he said, to protect “our standard of life from injury at the hands of more prolific races.”

Meanwhile, the controversy at Oxford over Cecil Rhodes will not end.  Should Rhodes fall or not? Oriel College decided not to remove from its wall the statue of the college benefactor, the British imperialist, businessman, politician who played a predominant role in South Africa in the late 19th century, ostensibly to avoid cost and planning problems.  About 150 Oxford university dons were unhappy with this decision, and stated they will not provide tutorials to Oxford’s undergraduate students, presumably including non-white students.  This form of academic blackmail by leftist intellectual activists, has been supported, even led, by Kate Tunstall, interim Provost at Worcester College, Oxford who previously at her own college attempted to scrap the saying of grace before meals. It is surprising, even unprecedented, for the head of one college to detract from teaching of students at another college. But she is a strident left-wing professor, supporting the protests of BLM and Rhodes Must Fall, expressing solidarity with the Palestinians, and committed to widening access to disadvantaged students as well as to toppling of monuments  to “colonialists.”

The signatories of no-teaching stated that the Oriel decision not to remove the statue of Rhodes glorifies colonialism and the wealth it produced for the College, and undermines the work to  eradicate racism and to address the ongoing effects of colonialism. The academics therefore, until Oriel College makes a commitment to remove the statue, will refuse to give tutorials to Oriel undergraduates, will refuse  to assist Oriel in interviewing prospective students, and will refuse to talk or attend  conferences  and meetings sponsored by Oriel. It is relevant to the issue that  Queen’s  College, Oxford, recently appointed the first associate professor of Black British history, Dr. Meleisa Ono-George, social historian of race and gender. Queen’s also has instituted a new undergraduate prize for the best thesis in black history, a prize named in honor of Professor Barbara Savage, of the department of Africana studies at the University of Pennsylvania.

Meanwhile who will teach the Oxford dons wisdom? The actual job of the arrogant dons is to teach, not exert academic blackmail in favor of ideology and political posturing. They should take a good look at Rhodes who did not fall.

PrevBirdwatchers Must Be Made to Embrace Diversity and Inclusion
The Lessons of the Yom Kippur War, Pre-Emptive Strikes, and IranNext