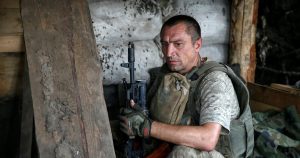 The ‘rule-based order’ is central to the liberal belief-system, and is now being dismantled before our eyes.  It has rested on words which have collapsed under the strain put upon them by events.  The key terms which open their meaning are the passive voice together with abstract nouns.  Their purpose is, in Orwell’s words, ‘to give an appearance of solidity to pure wind.’ Here, for example, is the centre-page article in the Daily Telegraph (7 March).  ‘The West can go on arming Ukraine, including by supplying fighter jets…We must do what we can to support its resistance…’  A fine word, ‘resistance’.  That means that we do what we can to keep the bloodshed flowing.  We would feel good, and Russians and Ukrainians would supply the blood, all of it.  And this is the policy of the British Government.

One of life’s minor pleasures is reading the Blowhards Corner in the Telegraph letters.  I select ‘Ukrainians will never be safe until NATO shows the resolve to face up to Russian aggression in a decisive way.’ Any ideas how these admirable aims can be achieved?  Gordon Brown, once a tenant of 10 Downing Street, has an answer: he wants a war crimes tribunal to be set up as in Nuremberg.  But Russia was on the board then.  Nuremberg required a defeated nation.  Does anyone think that Russia, a great power, will stand in the dock before the righteous nations who backed Ukraine?  And that war, of its nature, does not mean war crimes?  A few wretched Russian POW’s might be arraigned, who would have the just defence that they were obeying orders.  Those who gave those orders will always be perfectly safe in Russia. Commentators are fond of ‘the illegal invasion of Ukraine’.  What would a legal invasion look like?

As for ‘world opinion’, that is measured in the United Nations.  The recent voting did not yield absolute condemnation of Russia.  Of the Security Council’s five permanent members, one is Russia’s, a wise provision that stilled many previous conflicts.  A safe prediction is that world opinion will never back Russia against the wall.  And that will be used as a defence against critics.

Then, sanctions, that last best hope of punitive action.  But many (I refuse to employ the vogue word ‘multiple’) nations and elements see their interest lies in making money out of the crisis.  The media, even in the Business section, continue to denounce ‘dirty money’ but never define ‘clean money’ (an impossible task).  Time was when everyone could quote ‘pecunia non olet’, but that one went out with Latin.

The ‘rule-based order’ under which we were supposed to live has now collapsed.  It was always a fantasy, and Vladimir Putin has struck his axe to its foundations.  The future is impenetrable, and the likeliest guess may be close to Pope’s:

‘And universal darkness buries all.’

PrevNew English Review Press Announces Publication of Neither Trumpets nor Violins
Why did Sudan’s RSF/Janjaweed Commander travel to Moscow during Russia’s war with Ukraine?Next