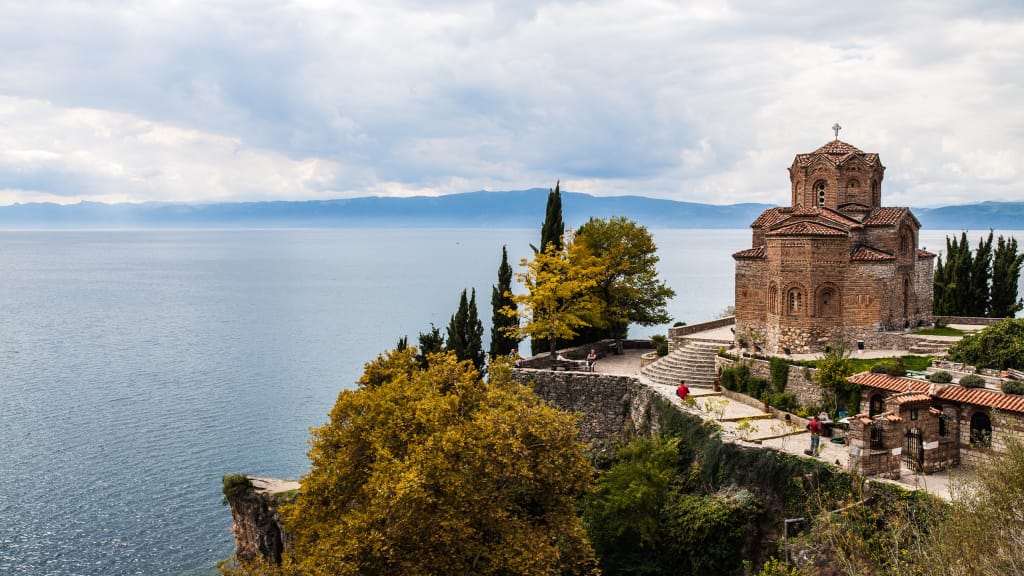 The Church of St. John at Kaneo in Ohrid, Macedonia

The foreign adventures of Russia in the U.S. and in Europe, with varying degrees of success, have all illustrated a cardinal thrust of its policy, the desire to influence the politics of democratic countries, and prevent the expansion of western influence. In June 2017 in one of his last publications, Senator John McCain warned of the Russian threat, and called on Congress to send a message to President Vladimir Putin that America will stand strong in defense of U.S. democracy. More specifically, on September 17, 2018, U.S. Secretary of Defense James Mattis warned, as did leaders of NATO countries, while he was in Skopje, capital of Macedonia, that Russian efforts, money and influence was trying to prevent the success of the referendum in that country on September 30, 2018.

Politics in the Balkans resembles the behavior and style of the great Hollywood film noirs, reflecting internal instability and threats from outside forces, with ominous atmosphere, ambivalent moral code not easy to define, violence and deaths.

The past and present events in Macedonia are almost as convoluted as the baffling plot in the notorious The Big Sleep. Its relationship with neighbors and with Russia, if not always presenting the mirrors and shadows of the film noirs or sense of doom, exemplify certain ambiguity, unexpected plot changes, crises, and corruption.

The Eastern European countries are a crossroad of culture and religions, embracing both bikinis and burkinis, diverse ethnic and religious history and affiliations .

Macedonia is a landlocked, small, 10,000 square miles, and poor country: it has high 20% unemployment, and its citizens earn 350 euros a month salary, the lowest in the Balkan countries. About a quarter of its 2.1 million population live abroad. Part Balkan and part Mediterranean, Macedonia has a complex history. Most of its inhabitants are of Slavic descent and from Eastern Orthodox Christianity, but a minority are of other ethnic groups, such as Albanians who make up a quarter of the population. Perhaps to reflect this, the macedoine, the fruit or vegetable salad, was named after the mixed population. The language of the country is closely related to Bulgarian and Serbo-Croatian, and written in Cyrillic script.

A quick survey is useful. In 1912-13 the two Balkan wars broke out with a number of states, the Balkan League, Montenegro, Serbia, Bulgaria, and Greece fighting against the European parts of the Ottoman Empire. Macedonians took part in the war but in August 1913 their territory was partitioned between Greece, Bulgaria, and Croatia. Greece was guilty of many atrocities against Macedonians, burning villages, and removing Macedonian names of places.

In 1918, Macedonia became part of Serbia which with Croatia and Slovakia founded Yugoslavia in 1929. During World War II  the area of Macedonia was occupied by Bulgaria, ally of Nazi Germany. In 1945 the Yugoslav Federal People’s Republic (later Socialist Federation)  was formed out of six republics, with Josip Broz Tito as president. The area of Macedonia, whose inhabitants were six % of the total ethnic population was recognized as a distinct republic in Yugoslavia.

Demands for independence grew. On September 8, 1991  a referendum calling for a sovereign and independent state, independence from Yugoslavia, was approved by 96% of the vote in a turnout of 75%. Some countries recognized this independence but others, under pressure from Greece, did not. Greece objected to the name “Macedonia” since it was the same name as the Greek province. Russia did recognize the independent state, the first major power to do so.

Two interrelated factors are involved in the issue, both related to the western orientation of Macedonia to which Russia is opposed.  One is the actual name of the territorial unit. The difficulty is that Macedonia is the name of the northern province of Greece that includes Thessaloniki, second largest city. Greece thought or pretended  that the other Macedonia had territorial ambitions. That state had named its main airport in the capital Skopje and a key highway after Alexander the Great. The state has recently renamed them.

The other factor is the desire of that unit to become a member of EU and of NATO as have other Balkan countries. Croatia and Slovenia are members of both organizations, and others are in process of being considered. Montenegro joined NATO. Serbia, juggling a delicate balancing act between its European aspirations and its traditional political and religious relations with Russia, and holding military exercises with both sides, is interested in EU membership while obtaining its oil from Russia.

Macedonia became an official candidate for EU in 2005, but the process was blocked by Greece. NATO in 2008 agreed to invite the state once its name was settled.

Greece argued that the constitution of Macedonia threatens the security and integrity of Greece, and imposed a trade embargo which cut Macedonia off from the port of Salonika.

However, on June 17, 2018 an agreement  was reached between Zoran Zaev, Social Democrat prime minister of Macedonia, and Greek leader Alexis Tsipas. Greece woud not object to Macedonia  joining NATO and EU if the country changed its name to “North Macedonia,” perhaps the first time one country has insisted on another country changing its name. To do so, the Macedonian parliament must change the constitution to reflect the new name. Macedonia affirmed that it did not claim Greek territory, while Greece recognised the Macedonian language and ethnicity.

Following this, Macedonia held a non-binding advisory referendum on September 31, 2018 to change the name. The result was mixed but disappointing. Over 91% were in favor but the overall poll was only 37%. A majority of at least 50% turnout is needed for a referendum to be valid.

The referendum was unsuccessful, which can be said to be a victory for Russia which acted in many ways to defeat it. It illustrated the Russian policy of destabilizing East Europe, and limiting the spread of NATO. Russia attempted to lower the electoral turnout by using disinformation campaigns, fake news, violence, cyberwarfare, monetary corruption and the influence of the Imperial Orthodox Palestine Society, a Russian organization for the study of he Middle East.  It  was responsible for 40 new posts on Facebook to boycott the vote. Russia indirectly helped the main opposition party, VMRO-DPMNE, a nationalist party that did not agree with the name change, had campaigned for a boycott of the referendum, as did the controversial politician Dmitris Kammenos. It encouraged the idea for a populist party to emerge to block the name change.

This was yet another example of Russian policy to prevent expansion of western influence. Russia has been on the offensive in Georgia in 2008, in Kosovo in 2008, in the Ukraine in 2014, and in the U.S. and French elections in 2016 and 2017. Russia on October 2016  participated in a  planned coup in Montengro on the day of the parliamentary election. The plan was to kill the prime minister, and install a pro-Russian party in power. Those indicted for the plot included two Russians. Montenegro accused the Russian “state structure” of being behind the attempted coup. One of the organizations presumed to have been involved was the Russian Institute for Strategic Studies.

Russia officially defended its role, arguing the plot was a rogue operation that Moscow did not sanction, though the pro Russian group involved wore uniforms and had encryption equipment. The Macedonian referendum election has made it incontrovertible that Russia has been active in the Balkans, with subversive propaganda, intelligence activity, friendship associations, cultural centers, the SVR foreign intelligence service, and GRU miltary intelligence agency, and using images of pan-Slavic identity and Orthodox Christian faith. The U.S. Congress needs no Special Counsel to recognize and address the threat.