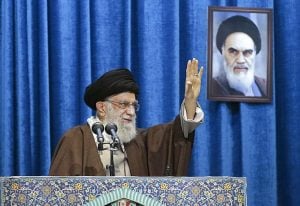 “Today the whole world understands who the aggressor is and who the victim is.”—Inna Rabinovich, born in Ukraine, emigrated to Israel.

Briefly, perhaps. After al-Qaeda’s Sept. 11, 2001 attacks in New York City and Washington, D.C., Europeans marched with placards proclaiming, “we’re all Americans now.” But not for long.

Sentiments provoked by faraway events wilt like last week’s bouquet unless nurtured by capable leadership implementing successful policies. Otherwise, the aggressor is left standing on the rubble of his victim’s graves.

The United States, helping organize the West’s sanctions of the Russian economy in retaliation and arms for Ukraine after Moscow’s, simultaneously begs Iran to agree new, weak restrictions on its nuclear weapons program.  With Russia and China as negotiating partners.

In exchange, and without limiting Iran’s missile development or support for international terrorism, Washington will grant Tehran hundreds of billions of dollars in economic relief. The Biden administration’s already taken the Iranian-backed Houthis in Yemen off the terrorist list and reportedly may do the same for Iran’s Islamic Revolutionary Guard Corps, its foremost terrorist arm.

America’s strategic self-sabotage probably does little to deter a Chinese invasion of Taiwan. It also likely contributes to circumstances in which Israel could be seen as the aggressor, Iran the victim if the Jewish state attacks to pre-empt the ayatollahs’ nuclear efforts.

The 20th century should have taught the West that when dictators—from Mussolini and Hitler through Mao and Stalin—announced murderous intentions, they meant them. Those surprised by Vladimir Putin’s aggression had not been paying attention. Putin for years made no secret of his belief that Ukraine was Russian. Unreversed gobbling of Crimea and the Donbas whetted his appetite.

President Xi Jinping—commanding a bigger, stronger, wealthier country than Putin—insists that Taiwan is China’s and will be absorbed. One way or another. Beijing’s subjugation of Tibet, Xinjiang and Hong Kong confirm the brutal nature of  Xi and his Chinese Communist Party.

As for Israel, Iranian leaders including “Supreme Leader” (idiomatically a Farsi equivalent for der Fuehrer) Ayatollah Ali Khamenei, have made no secret of their belief it is “a cancerous tumor that can and will be cut.” Writing in March’s issue of the online magazine Mosaic, Ze’ev Maghen, chair of Middle East Studies at Israel’s Bar-Ilan University, asserts the West fails to understand that Iran’s ideology—a Shi’ite Islamist supremacism—is its motivating force.

Central to that creed, justifying Iranians’ impoverishment under international sanctions meant to hobble its nuclear program, is the destruction of Israel. So writes Eran Lerman, Col., Israel Defense Forces (Res.) and former deputy director of Israel’s national security council, in the forthcoming issue of inFOCUS, the quarterly magazine of the Jewish Policy Center.

Iran funds and arms Palestinian Hamas with tens of millions of dollars. Hamas possesses  tens of thousands of rockets in the Gaza Strip. Iran slips the Lebanese Hezbollah more than $100 million annually. Hezbollah has 100,000-plus missiles and rockets. Both groups, U.S.-designated terrorist organizations, have indiscriminately attacked Israeli civilians.

Israel’s long, covert war against Iran’s nuclear program may have delayed an Iranian nuclear bomb by more than 20 years, according to former defense minister, Moshe Ya’alon. But time could be running out. The Institute for Science and International Security recently concluded Iran will possess enough enriched uranium for four nuclear weapons within four months of breaking out of the limited restrictions reportedly being negotiated.

Israeli leaders, including Prime Minister Naftali Bennett, have made clear they will not be bound by such an agreement. In the event of an attempted Israeli preemptive strike on Iran’s nuclear program—like Jerusalem’s 1981 destruction of Iraq’s nuclear reactor and 2007 elimination of Syria’s—or to divert Israel from staging one, Iran might unleash Hezbollah.

Since Israel views Lebanon as a Hezbollah captive, taking down Iran’s biggest foreign surrogate might mean destroying much of Lebanon. Though Israel would be acting to defend itself, not to conquer its northern neighbor, devastated Beirut could look something like bombed Kyiv.

Will the whole world then recognize the aggressor and its would-be victim? Or will Israel and its supporters be attacked with a ferocity exceeding the anti-Zionist, antisemitic eruptions from Paris to Los Angeles sparked by last May’s pinpoint retaliation against Hamas in the Gaza Strip?

Every war is preceded, accompanied and followed by a psychological war. Yet in the face of an Iran newly-enriched and empowered by a nuclear deal with the United States, the pro-Israel psych-war is AWOL.

First published in The Times of Israel.

Eric Rozenman is author of From Elvis to Trump, Eyewitness to the Unraveling: Co-Starring Richard Nixon, Andy Warhol, Bill Clinton, the Supremes and Barack Obama! recently released by Academica Press, and communications consultant for the Jewish Policy Center.