Rutgers University, be Clear about Antisemitism 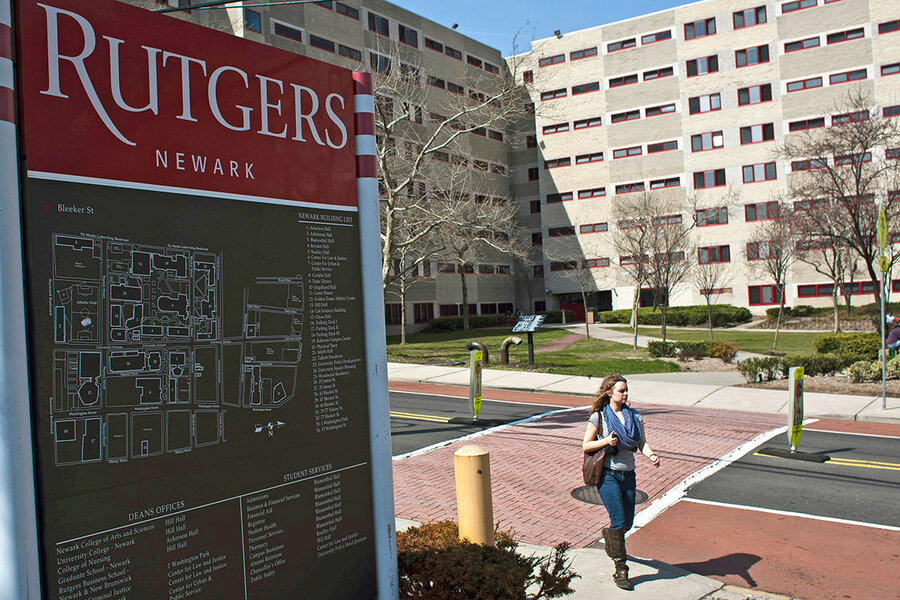 Whatever the situation in the Middle East, there is no excuse for the importing of prejudice against Jews to the streets in Britain and the U.S. In both countries, there is anxiety about the increase in antisemitic incidents and expressions in recent months. Inevitably this increase is related to the more focused and misinformed commentary on the Israeli-Palestinian conflict which has led to antisemitic incidents and the expression of antisemitic views. This has caused a reaction. A full-page paid advertisement issued on June 1, 2021 by a variety of non-Jewish organizations and persons said that “New York Stands against Antisemitism.”  It stated that over the past two weeks the signatories had seen a frightening rise in physical and verbal assaults against members of the Jewish Community in New York.

An equally strong, unequivocal statement was issued on May 28, 2021 by the British Secretary of Education, Gavin Williamson, in an address to headteachers and school leaders. He wrote of the concern about the increase in antisemitic incidents in some British schools, and the bullying of Jewish students and teachers.  Antisemitism, he held, is racism, it is abhorrent and, like other forms of racism, has no place in schools. It is unacceptable to allow an atmosphere of intimidation or fear for students and teachers. Teachers should ensure political impartiality over the Israeli-Palestinian conflict which had prompted a wave of protests in schools. Political expression should be conducted sensitively, avoiding disruption.

Williamson dealt with the problem in schools, but the issue is widespread. The British CST has reported that in the 11 days in May 2021, during the war started by Hamas against Israel, 116 antisemitic incidents were recorded, 34 online, and 82 offline, mainly verbal abuse. Prime Minister Boris Johnson was equally strong. On May 30, he asserted there was no place for antisemitism in society, that British Jews should not have to endure shameful racism, and that antisemitism on British streets was intolerable.  He was responding to the incident of a convoy of cars bearing Palestinian flags driving through a Jewish area in north London and broadcasting hostile messages from a megaphone.

These strong statements on antisemitism have been necessary and essential to overcome the evident prejudice against Jews and Israel not only by Palestinian propagandists, but also by political personalities, organizational leaders, media celebrities, and academics and teachers.

It is saddening to learn of the views of the co-founder in 2013 of BLM, Patrisse Cullors, who on May 27, 2021, announced after five years in the position that she was stepping down from her role as executive director of the BLM Global Network Foundation, apparently to devote more time to other projects, such as her second book and her TV deal with Warner Bros.

Now under fire for her lavish lifestyle, personal wealth and the purchase of four houses, more attention has been paid to her political utterances on Jews and Israel. Cullors, a self-described trained Marxist, in a panel in April 2015 at the Harvard Law School, called for an end to Israel because of the violence and terrors being committed by Israelis and Zionists in the West Bank and Gaza.. She told Harvard students to step up boldly and end the imperialist project that’s called Israel or we’re doomed, and suggested they participate in the BDS, boycott, divestment, and sanctions movement. In 2015 she referred to Israel as an apartheid state.  Palestine, Cullors said, is our generation’s South Africa. In an interview on Al Jazeera in December 2019, she remarked, “We realized we need to take our Palestinian solidarity a step further, we need to be more public.

A more flagrant case is that, of David Miller, professor of sociology at Bristol University. There is nothing ambiguous about Miller. He calls for the defeat of the Zionist ideology in practice; it not enough to say Zionism is racism, Israel is a settler colonial society. The aim is to end settler colonialism in Palestine, and end Zionism as a functioning ideology.  He attacked both Bristol University’s Jewish society and the Israel lobby for a campaign of censorship against him. This lobby uses a “weaponization of bogus antisemitism claims to shut down and manipulate   discussion of Islamophobia.”

His case is clear, yet he was defended on free speech grounds in an open letter by over 315 academics and others, including Noam Chomsky, Judith Butler and Ilan Pappe. They praised Miller as an eminent scholar, stating his research on the manipulation of narratives by lobby groups has been “crucial to deepening public knowledge and discourse in this area.” Dave Rich, in a CST blog of December 18, 2020, has pointed out that Miller connects Israeli state institutions and UK Jewish organizations, both trying, using finance and lobbying, to sabotage and undermine the role of Muslims in public life. Members of Bristol’s Jewish Society, for him, are local agents of a foreign power, one that wants to impose its will all over the world.

It is appalling that Miller’s diatribes of “Jewish or Zionist networks” should be regarded and praised by reputable intellectuals as expressions of free speech. His writings and classes have the effect of inciting hatred against Jewish students, and indeed all Jews in the UK,  and are morally reprehensible.

A somewhat confusing picture emerges from the attempt of academic leaders at Rutgers University to comment on antisemitism. About 1/6 of the students at Rutgers are Jewish. In recent months they have been attacked, their cars slashed, their fraternity house defaced during Holocaust Remembrance Day. The first statement on the Rutgers website on May 26, 2021 by New Brunswick Chancellor Christopher Molloy and Provost Francine Conway denounced, and were greatly concerned by the sharp rise in hostile sentiments and antisemitic violence in the U.S. They stated that the resurgence of antisemitism demands that “we again call out and denounce acts of hate and prejudice against members of the Jewish community and any other targeted and oppressed groups on our campus and in our community.” The statement, going further, also addressed three other issues: the recent fighting between Israel and Hamas; the murder of George Floyd which brought into sharp focus the racial injustices that continue to plague the U.S.; and attacks on Asian American Pacific Islanders, Indigenous peoples, Hindus and Muslims.

Though the statement of the two university officials was not limited to a condemnation of antisemitism, the next day after its publication, the Rutgers chapter of Students for Justice in Palestine, SJP, denounced it for being inadequate at a time when Israel’s occupation of Palestine was finally receiving widespread criticism . It held the two officials had refused to affirm the existence of Palestine and said Rutgers does not  stand in genuine solidarity with the Palestinian members of its university  and community that is grieving over the death  of over 200 Palestinians.

The SJP was displeased. Rutgers not stand with or support their struggle for freedom and liberation,  and contributed to the “ racism efforts  of Zionists to erase Palestinian identity.” They demanded the Rutgers administration not only apologize for their statement, but also expose any or all ties to “Israel apartheid and acknowledge the gross mass murders” by Israel Defense Forces.

It continued, “as we grow in our personal and institutional understanding, we will take the lesson learned here to heart and pledge our commitment to doing better; we will work to regain your trust, and make sure that our communications going forward are much more sensitive and balanced.” The two officials were trying to be everything to everybody.

Rutgers president Jonathan Holloway on Saturday May 29 in a statement said the university deplores hated and bigotry in all forms: “we have not, nor would we ever apologize for standing against antisemitism.” Apparently, an apology was not an apology.  He continued, hatred and bigotry have no place at Rutgers, nor should they have a place anywhere in the world. “We believe that antisemitism, anti-Hinduism, Islamophobia, and all forms of racism, intolerance and xenophobia are unacceptable.”

But Holloway’s statement is equivocal, and somewhat difficult to interpret, because the May 27 statement was headed an apology. It contrasted with the unequivocal Rutgers statement in March that condemned anti-Asian prejudice without qualification or reference to any other minority group. It also failed to stress that condemning antisemitism is not conditional or related to the conflict in the Middle East.

The Rutgers picture illustrates the lack of understanding that antisemitism is a metaphor for racial hatred.  Of course, other hatreds and discrimination are present and must be condemned, but they are not to be equated with the virus of antisemitism. Few of the statement in this era of woke politics are unequivocal denunciations of antisemitism.

PrevPsychologists Hope to Combat Antisemitism as an Illness
Austrian student, 19, is attacked on a train and called a ‘Jewish slut’ only for Vienna cops to accuse her of acting provocatively by reading a book about JewsNext