From The Jewish Chronicle, Varsity the independent newspaper of the University of Cambridge and the Daily Mail

Shaima Dallali has been sacked as president of the National Union of Students (NUS) after a months-long independent investigation into allegations of antisemitism, the NUS has confirmed.

After being suspended from her role at the end of August, it is understood that the organisation has decided to dismiss her for gross misconduct.

It is thought to be the first time in the 100-year history of the national student organisation that a president has been suspended or fired. 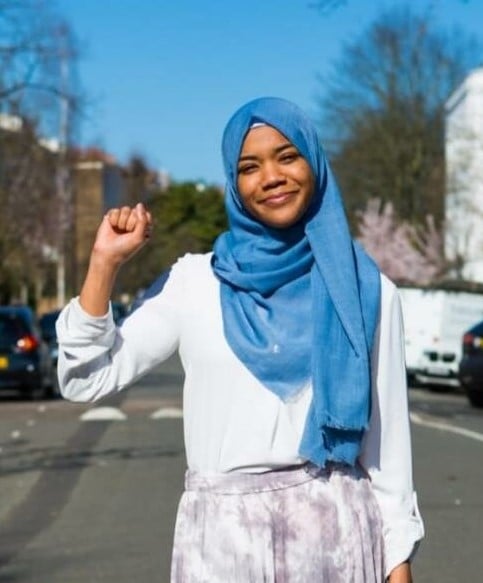 Dallali, who is of Sudanese-Tunisian heritage, was elected for a two-year term by delegates at the NUS national conference in March, but soon afterwards faced a backlash.  Historical tweets emerged, making offensive references to the killing of Jews in the 628 Battle of Khaybar.  She apologised for the ‘wrong’ and ‘unacceptable’ post she wrote as a teenager in 2012. But other deleted tweets allegedly included statements which appeared to be supportive of the Islamist terror organisation Hamas.

In material passed to the JC earlier this year by researchers at Labour Against Antisemitism, it was revealed that she had labelled a cleric critical of Hamas a “dirty Zionist” and posted a video of anti-Israel protesters calling for an intifada.

And in a 2018 article, she praised Muslim Brotherhood cleric Yusuf al-Qaradawi – who was expelled from Britain, America, France and Germany – calling him the “moral compass for the Muslim community at large”.

In May, it emerged she may have broken an NUS rule by failing to commit to the International Holocaust Remembrance Association (IHRA) definition of antisemitism before her appointment.

Facing huge public pressure, the NUS then announced that it had appointed Rebecca Tuck KC to conduct an independent investigation into Miss Dallali, as well as allegations of institutional antisemitism.

Last night a spokesman for the NUS said: ‘Following the independent KC-led investigation into allegations of antisemitism, specifically into the then President Elect under the NUS Code of Conduct, an independent panel has found that significant breaches of NUS’ policies have taken place. As per this finding, we have terminated the President’s contract.’ They said no further details would be shared due to ’employee confidentiality’

Responding to her sacking, Dallali tweeted: “On the first day of Islamophobia Awareness Month, I find out I have been dismissed through Twitter. “That is unacceptable”, she added.

Following the news of her suspension (on 24th August) Dallali posted on Twitter, saying: “Don’t ever believe that an organisation is ‘progressive’ or cares about justice before finding out how they treat women of colour and/or Muslim women. Many enable oppression and Islamophobia. They will punish us for daring to be political and make us believe it’s our fault.”

Two weeks later, Dallali posted a lengthy thread on Twitter: “I always knew it would be difficult being a Black, Muslim woman in the public eye but the racist and Islamophobic abuse I have been subjected to and death threats I have received since becoming NUS president are not ok.

In a statement, the Union of Jewish Students said: “UJS respects the decision of the National Union of Students to dismiss their President. Antisemitism in the student movement goes beyond the actions of any one individual and this case is a symptom of a wider problem.

“Jewish students across the country will be asking how an individual deemed unfit for office by NUS was elected in the first place. We await the findings of the substantive inquiry into NUS’ treatment of Jewish students.”

According to 5 Pillars UK The Federation of Student Islamic Societies has called on Muslim students to boycott the National Union of Students.

Their statement began: On the first day of Islamophobia Awareness Month, the National Union of Students (NUS) has dismissed its Muslim President via leaked stories to newspapers. This is disgraceful and unacceptable As the largest representative body for Muslim students, FOSIS (Federation of Student Islamic Societies) have come to the conclusion that NUS is no longer an organisation that take Muslims or Islamophobia seriously and therefore is not a safe space for Muslims. . .

Therefore, we have come to the conclusion that NUS is no longer fit for purpose Consequently, FOSIS is calling on all Islamic societies, friends and those who oppose Islamophobia to organise and lead disaffiliation campaigns against the NUS on their campuses.