From the Telegraph and the Mail on Sunday

Shamima Begum, the Bethnal Green schoolgirl, served in the Islamic State’s “morality police” and also tried to recruit other young women to join the jihadist group, well-placed sources have told the Telegraph. She was allowed to carry a Kalashnikov rifle and earned a reputation as a strict “enforcer” of Isil’s laws, such as dress codes for women, sources claimed. 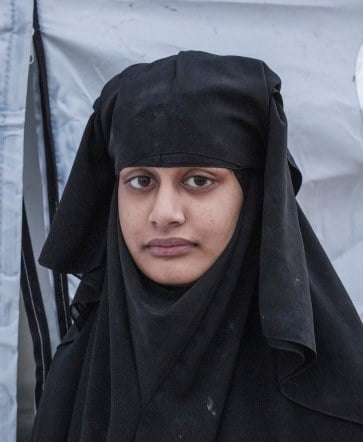 The claims are at odds with Miss Begum’s own account of her four years with the group, which she joined at the age of just 15. Miss Begum, now aged 19, has insisted she was never involved in Isil’s brutality but spent her time in Syria as a devoted housewife to a jihadist fighter.

Details of Miss Begum’s alleged role in Isil have come from two separate sources, including an anti-Isil activist group Sound and Picture, whose members lived under the jihadists’ rule and closely followed its members. Some of the information has been confirmed by Western intelligence, which is understood to be looking into the allegations as part of a criminal investigation. It is understood the information was gleaned by allied spy agencies – believed to be the CIA and Dutch Military Intelligence – from interrogation of other Western IS converts.

According to Sound and Picture, Miss Begum arrived in Syria after crossing the Turkey border in February 2015. She was then taken, along with two other Bethnal Green schoolgirls, to the central city of Raqqa, which had become the capital of Isil’s self-declared caliphate. They were then sent to a “madhafa” or guesthouse for single women, where Miss Begum was married off to Riedijk.

According to the activists she then enrolled in al-Tala’ia camp just south of the Euphrates River in Raqqa province, where she stayed for three months receiving “military and religious training.” After that, she, Amira Abase and Kadiza Sultana, are said to have graduated to the Khansaa Battalion, a notorious all-female “police squad” which had other British members in its ranks, including Muslim convert Sally Jones.

Miss Begum is then alleged to have worked for several months in al-Hisba, Isil’s religious enforcement unit.

“There were lots of young European women in the Hisba,” Aghiad al-Kheder, an activist from Deir Ezzor who founded Sound and Picture, told the Telegraph. “Some of them were very harsh and the local population became very scared.”

He said Miss Begum carried a Kalashnikov rifle and had a reputation for being strict on women she thought were behaving in a “non-Islamic” way, according to Isil’s punitive rules.

“Members of our group from Raqqa knew her well,” said Mr Kheder. “If you get the chance to interview her again you can ask her about an incident that happened in al-Amassi Street in Raqqa in 2016, when she was with the Hisba. She shouted at a civilian woman wearing brightly coloured shoes and told her that was ‘haram’, or not permissible, as this would attract the attention of men. The woman said to her, ‘so why is it ok for you to wear coloured shoes?’ Shamima was herself wearing white and pink trainers. “She will remember this,” he said.

The Mail on Sunday has learned that the Prime Minister and Home Secretary have been briefed by the intelligence services about claims that British-born Ms Begum was witnessed preparing suicide vests for would-be martyrs – sewing them on to the bombers so that the devices could not be removed without detonation. However, a senior intelligence source said: ‘She was involved and her former comrades have grassed her. She was literally stitching the vests, stitching them into the vests.’

Syrian troops and Western special forces spent 2017 clearing the city of Raqqa house by house. Their efforts were severely hampered by suicide bombers.

But a Government source said: ‘Those who stayed to the end were the hardcore, there is no disputing that. Lots of them went [to the IS stronghold] for a couple of weeks, hated it and came back. Many more left when Raqqa fell over a year ago. But she stayed to the bitter end and now we know why.’

PrevSay Nothing, Do Nothing
First Review: No One Likes Us, We Don’t CareNext