From My London and Mail on LIne

Jon* remembered noticing matching pins on the lapels of his classmates Shamima Begum and Amira Abase’s blazers. It was a black flag with white Arabic writing on it.

Curious about what it represented, he asked. “They explained it was an Islamic group,” said Jon. “[They said] everyone that’s part of the group, they’re going to heaven. [The group] are trying to build a better place; a utopia…They’d start talking about religion and try to rope people in, …They were really pressuring about it, there were like ‘you know, if you don’t go to Islam you’re going to hell, you’re going to die’.”

Shamima and Amira spoke with such knowledge and maturity, said Jon, their words often sounded like they’d been scripted by adults.

Their chats took place at school, although Amira also contacted him on BlackBerry Messenger. They never spoke on Facebook or any other platforms “that could be tracked.”

He said Amira wanted him to meet an Imam-an islamic teacher-who could explain things about ISIS in more detail.

“Being 14 years or 15 years old, you don’t have that mental capacity to think you know what is right and what is wrong. So in my experience, it was scary,” he said.

But the teenage Jon, who is not from a Muslim background, also found the pitch appealing.

“[They told me] there’s a community in Syria,” Jon explained. “It’s expanding, it’s growing, it’s the next big thing. They made it sound as if it was such a good place to be: You don’t need to worry about money or whatnot, everything’s there for you. If you just study and learn religion, uphold the values of Islam, your life is sorted.”

“It was very attractive and I could see why those girls wanted to be there. “[Based on this message] I can understand other people who were thinking of going or went to Syria.”

Jon didn’t keep up with the news, he wasn’t aware there was a brutal civil war tearing the middle eastern country apart. He only realised later, the group Shamima and Azira wanted him to join was the Islamic State In Syria or ISIS. The black symbol he’d noticed on their blazers, it was their flag.

“I never heard anything about ISIS violence,” Jon explained. “What you got pitched was a sunny, beautiful, idyllic place. As a kid you want that fairytale life.”

Whether Shamima Begum, Amira Abase and Kadiza Sultana were aware of ISIS’s brutal practices when they decided to take the leap a few months later and go to Syria has been a matter of fierce debate. 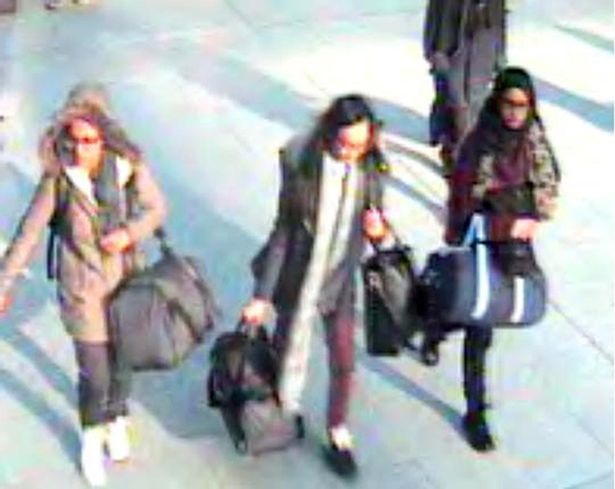 If they were, they certainly never mentioned anything about it to Jon when they encouraged him to join. He only discovered the true nature of ISIS when his friends left for Syria.

Many articles have been written about the three girls who travelled to Syria in February 2015, none so far have spoken to their peers. But, after months of research, My London found students who attended BGA around the same time as Shamima, Amira and Kadiza, willing to speak about what went on.

Given the extreme reaction this episode still generates amongst the British public, it was not easy to find people willing to speak and for the same reasons those who did have their identity protected.

Jon said things started to get strange around Christmas 2014 when another girl from Bethnal Green Academy, Sharmeena Begum (no relation to Shamima), suddenly disappeared.

It later transpired she had travelled to join ISIS in Syria.

But when she went missing her schoolmates asked the teacher – why?

“She was in our science classes so we were like ‘where’s Sharmeena? What’s going on?’ The teachers didn’t know themselves or maybe they did, but didn’t want to tell us,” said Jon.

A couple of months later, when news of Shamima, Amira and Kadiza’s disappearance exploded across the media, it all made sense.

“That’s how we all kind of fit the pieces together,” said Jon.

The students weren’t the only ones to grasp what had happened, the authorities did too.

“The next day every single kid that was close to them had to register with this police officer in the morning,” explained Jon. “If you don’t register, right in the morning, they will immediately call your family and if they don’t pick up, they’d go to the house and see what’s going on. It was very scary. Everything you did at school, the police had to know about.”

Jon was one of those who was forced to sign in with the police. It was a daily requirement which lasted until he graduated, which was several years.

As well as being treated with suspicion, Jon and his friends were banned from speaking about their classmates who’d disappeared.

He pointed out that the school had reasons to be concerned about its reputation. Previous to the ‘Bethnal Green Trio’ its most famous alumni were the Kray twins. I have mentioned previously that 10 years before the Kray twins attended my father and several of my uncles were pupils. It was then called Daniel Street. Over the last 20 years it has had so many name changes it has ceased to be the same school.

When Jon had joined the school it had a reputation for knife crime and violence, one it had been steadily shedding with its increasingly impressive academic performance.

He believes they didn’t want this disrupting, and points to the fact that less than a year after the girls went to Syria the school rebranded itself as Green Spring Academy Shoreditch.

“If you utter one word about it you were in detention,” Jon continued. “It felt like you were in an authoritarian regime where you’re controlled and can’t say certain stuff.”

He describes his school experience after that as “being like North Korea.”

“There was no support. [The attitude was] if you spoke to them, and you’re part of them and you’re under surveillance.”

As a consequence Jon and his friends became terrified to talk about the traumatising events at all, scared that they might be being spied on.  “[We were worried they would say we were part of ISIS] but we’re not, we were just kids, we were curious.”

But Jon can still see the girl he met in year 7 and he feels sorry for her. He says some of her statements supporting the actions of ISIS made in interviews after she was ‘discovered’ by a Times journalist in 2019, make him uncomfortable, but overall believes she deserves a chance to return to the UK.

“I always believe in second chances, people make mistakes,” he said. “I personally forgive her for trying to rope us into it.”

Rabia* was much younger than Shamima, Amira and Kadiza, but she remembers the three girls from the corridors of Bethnal Green Academy.

Being a shy girl from a Muslim background she was impressed by the confidence of these older girls who also wore the hijab to school.

“These were three girls we all kind of looked up to,” said Rabia. “We saw them around, talking to teachers, talking to each other; so cool, so confident. “[I thought] I want to be like those cool hijabi girls.”

The refusal to discuss the girls, that Jon describes, was also something Rabia experienced, but she interpreted differently, she saw it as a form of protection for the younger students.

Despite the increased police presence, Rabia felt more in danger as a Muslim girl, those fears were made worse when she was abused on her way home from school one day.

“[It was scary because] three girls had run off to join something that puts a bad name on me and my community. They went to join ISIS and as a Muslim hijabi girl, I felt really scared that someone was going to hurt me. One time I was walking with my two friends, they were also hijabi Muslim girls, and people were shouting at as us calling us ‘three terrorist girls’.

She said more should have been done to prepare and protect Muslim children from these types of attacks. “I feel like they should have given a lot more support to the Muslim students, because we were getting harassed as kids outside.”

As well as people shouting abuse, strangers would blatantly stare at her and her friends, and ask for information on the Bethnal Green Trio.

Rabia is far less forgiving of Shamima than Jon, she found the woman interviewed by the Times and BBC to be unrecognisable from the “cool hijabi girl” she once looked up to.

She said: “She has become completely different. I know it’s kind of rude, but it’s actually like she became so dumb…”

Rabia sees her decision to join ISIS as a betrayal: “As a Muslim girl, she went to join a group that tries to make us look like the most horrible people. I understand that she was groomed,” she said. “But she was a year 11 student, she wasn’t a little kid. . .  If you’re going to join something that tries to strip those values and tries to take your religion of peace and turn it into something disgusting and horrible, then that’s on you.”

Interesting that the non-Muslim boy knows she was involved with something wicked but wants to forgive her and give her a second chance, which is commendably Christian even if I think he is wrong about allowing her back into the country and I oppose that suggestion. But the Muslim girl is only concerned with the reputation of Islam as presented to the dhimmi, and how Begum has not kept up the taqiya.

It was incredibly hard to find anyone to answer the allegations about the actions of the school for this article.

Due to the way the academy school system works, the local authority, Tower Hamlets, has never had responsibility for Bethnal Green Academy and therefore was unable to comment on what happened in 2015.

However, Bethnal Green Academy no longer exists in the form it did in 2015.

Three years after the girl’s disappearance it was taken over by the Mulberry Schools Trust and renamed Mulberry Academy Shoreditch.

The school has completely new management, trustees and governors since the incident of 2015 and much of the teaching staff has changed.

My London attempted to contact former headteacher Mark Keary and track down other senior leaders. But received no response to our enquiries.

Mulberry Academy Shoreditch itself said it was unable to comment on any of the allegations because it was in effect a different school.

Shamima, Amira and Kadiza’s generation were one of the last to have known the school to have a bad reputation.

During the time the trio were there in the 2010s, things evolved, the academics improved substantially and there were opportunities from kids from all backgrounds.

That improvement has been somewhat clouded by a subsequent scandal involving cheating in exams, which saw the dismissal of several teachers including the head Mark Keary. It also led to yet another name change and is now known as Mulberry Academy Shoreditch.

*Names have been changed to protect the identities of those involved.