Two sick men who sexually abused a vulnerable young girl have been jailed for 40 years.

From the Huddersfield Examiner; the satisfactory conclusion to this trial which began three weeks ago and proceeded under reporting restrictions.  I say ‘satisfactory’, but it wasn’t 40 years imprisonment each, but between them. Each, or life for these sort of rapes would be preferable.

Khurum Raziq, 40, from Heckmondwike and Nasar Hussain, 44, from Dewsbury were arrested and charged following a major investigation into non-recent child sexual abuse in Kirklees. The pair were found guilty of multiple rape offences against a young girl in the Heckmondwike and North Kirklees areas and sentenced as part of a long-running enquiry by Kirklees Police and partners into the sexual abuse of young girls from North Kirkless between 1999 and 2012. 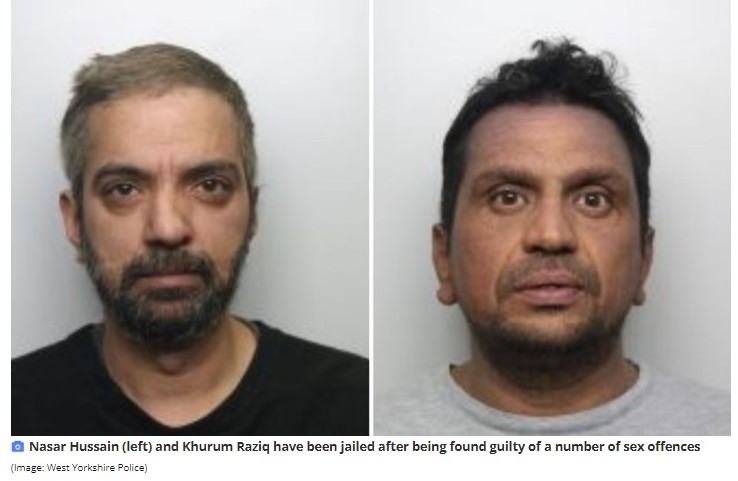 The offences they were sentenced for related to abuse committed between 2003 and 2005 against one girl who was just 12 when it began.

Raziq was found guilty of eight offences of rape and jailed for 22 years. Leeds Crown Court heard he had been introduced to the girl when she was just 12-years-old and he went on to commit multiple rape offences against her. Hussain was found guilty of three offences of rape and jailed for 18 years. He was introduced to the victim by another girl when she was 14. He went on to groom her and commit sexual offences,

And from  BBC Leeds and West Yorkshire

The court heard how she had later been “passed around” and sexually abused by more than 50 men.

On one occasion she was taken to Middlesbrough and “abused by many men when she was locked in a room for three days”.

Sentencing them, Judge Marson QC said the teenager was “deliberately targeted because of her age and vulnerability”. “This could be seen as a campaign of rape”, he said. . .  Judge Marson told the defendants they had shown no remorse and the victim had suffered psychological harm.

The status of the third man who wasn’t fit to attend trial and couldn’t even be named hasn’t been reported.

PrevOUCH! Sorry, Not Now
Uvalde: What Happened and where do we go from here?Next