Since When Are Nurses the Enemy?

The healthcare professionals have been warned not to discuss any of the mistreatments, nor of the crippling side effects of the vaccines: strokes, neurological disorders, seizures, heart attacks. 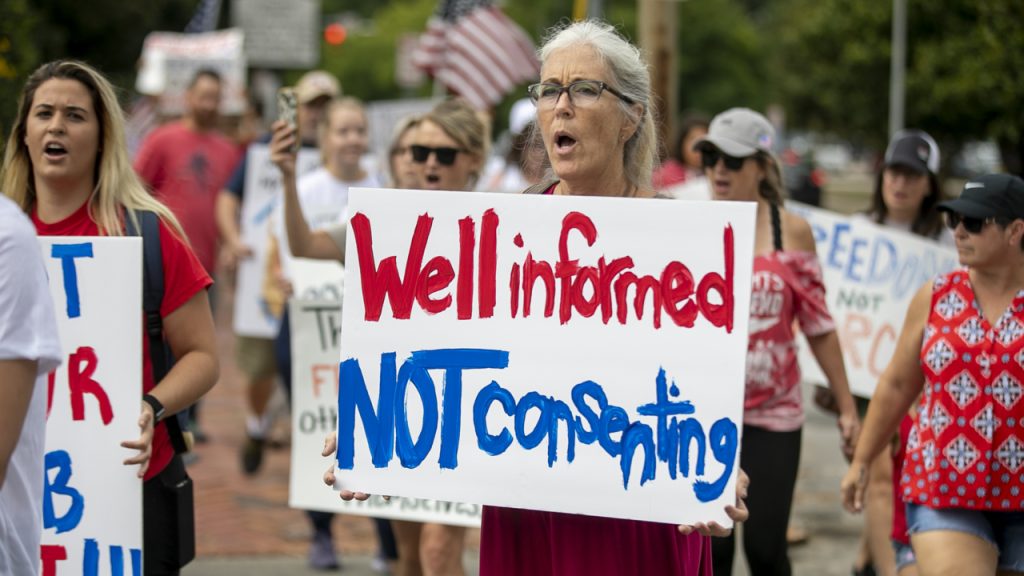 When the Wuhan virus first began to spread, physicians and nurses were praised universally for continuing to treat patients, even when some of the healthcare workers were dying from the novel illness. Recall how in the early days of the pandemic, Europeans on lockdown would go out on their balconies to applaud frontline workers, shout encouragement and praise, and sometimes sing songs on their behalf.

It was truly inspiring. Humanity at its best.

Now, two years into this “temporary emergency,” many of these same physicians and nurses are being persecuted by the authorities and demonized by traditional and social media.

Like the legendary hydra, there is a resurgent totalitarian movement in both North America and Europe that has attached itself to “the temporary emergency.” The COVID pandemic now comprises one of the heads of this hydra; it has been politicized by the Left, which has always had a totalitarian aspect to it. Like every totalitarian phenomenon in history, the pandemic panic shares certain characteristics with its historical predecessors: censorship, persecution of dissenters, insistence on unquestioned obedience and conformity, the NPC mentality of fanatics snitching on nonconformists, and, of course, dogma.

We hear those refusing the vaccine called zealots and science-denying, Trump-supporting, ignorant yahoos who are spreading “disinformation” and “misinformation.” (In reality, polls show the demographic most likely to be hesitant in getting the vaccine are people with advanced degrees.)

In the totalitarian mentality, if facts don’t agree with the dogma then the facts are either ignored or fabricated. We see this whenever totalitarian authorities come into contact with science. Scientific facts are mutilated, ignored, or simply made up to conform with the ideology.

Viewed in this light, the bizarre mistreatment of physicians and nurses becomes less confusing. It also explains why so many of the Covidians oppose an end to the virus apocalypse. When faced with those defending their rights of free speech, freedom to worship, and the right to assemble, the Covidians’ reaction is, “To hell with your freedoms!”

Elsewhere, I have detailed all the brave doctors who have publicly dissented from the official dogma regarding lockdowns, treatments, and vaccines, based on both their clinical experience and on published research. By dissenting and by prescribing alternative treatments to their patients, and thereby saving their lives, many of these doctors have been harassed, censored, and retaliated against by the zealots threatening their jobs and their licenses. (In true Soviet fashion, one doctor was ordered to undergo a psychiatric examination for her heresy).

The same is true of nurses.

And because they have shown great courage, and because most have been silenced, and because they deserve to be heard, I will cite the nurses’ travails. I strongly urge the reader to view the accompanying heart-rending videos of their testimonies.

Here it’s worth mentioning that in both clinical practice and in lab research, the “vaccine” (which is not the usual type of vaccine but rather a kind of gene therapy) has been shown to have serious side effects, such as myocarditis and blood clots. Miscarriages and even deaths have occurred. Dr. Byram Bridle has said,

We thought the spike protein was a great target antigen, we never knew the spike protein itself was a toxin and was a pathogenic protein. So by vaccinating people we are inadvertently inoculating them with a toxin. Once in circulation, the spike protein can attach to specific ACE2 receptors that are on blood platelets and the cells that line blood vessels. When that happens it can do one of two things: it can either cause platelets to clump, and that can lead to clotting. That’s exactly why we’ve been seeing clotting disorders associated with vaccines. It can also lead to bleeding.

So, you see, there is a very good reason why it takes years for a new medicine or a new vaccine to be released to the general public. (Thalidomide, anyone?)

What the Nurses Say

A British National Health Service nurse named Emma resigned from her profession, refusing to participate in what she called “crimes against humanity.” She posted a scathing letter explaining in detail what she had witnessed.

A group of maternity ward nurses in New York resigned rather than submit to the experimental injection.

Caroline Pinto, a nursing student in Denver, was kicked out of the University of Colorado’s medical program for refusal to take the vaccine on religious grounds in spite of the university’s declaration that it honors religious exemptions.

A number of nurses quit or were fired at Houston Methodist Hospital for either refusing to take the vaccine or for speaking out against it because it was not given proper clinical trials. The hospital CEO said the nurses had circulated “misinformation.”

Nurse Melissa Rexroth was fired for refusal to take the experimental vaccine, but not before she posted a video about her dilemma.

At least 12 percent of American nurses are unvaccinated. As a result, some hospitals are offering bonuses for new nurses. But they must be vaccinated.

“A major part of why people were dying from COVID is [that] they were putting people on Remdesivir and intubating them,” said Helen Smith, a nurse who worked at Cleveland Clinic Indian River Hospital, in a lengthy interview with Gateway Pundit. “The only drug they were giving people is Remdesivir—and we still are. Remdesivir costs $5,000 a bag and it doesn’t do anything. It can shut your organs down. A lot of the COVID patients treated with Remdesivir end up on dialysis. Intubating patients is basically a death sentence, especially with the Delta variant, we save very few.”

“When the vaccines were first administered, you would not believe the number of strokes we got,” Smith added. “The Cleveland Clinic is a stroke center and I had never seen anything like it.” (Note, in particular, this graph on the Vaccine Adverse Event Reporting System showing an enormous spike in deaths following the introduction of the three COVID vaccines.)

In a powerful video, Australian nurses had to go undercover in order to report the harmful, even fatal, pseudoscience that their hospitals are engaged in. The healthcare professionals have been warned not to discuss any of the mistreatments, nor of the crippling side effects of the vaccines: strokes, neurological disorders, seizures, heart attacks.

Jerry Bledsoe, a nurse at Fayetteville Medical Center in Virginia, wrote a blistering letter to his superiors. “I believe that by participating in the COVID-19 protocols, I will be intentionally doing harm to those individuals who will be placed in my care, and it will prevent me from practicing a primary duty of advocating for my patients,” he wrote. “It is my belief that by forcing my coworkers and [me] to participate in the COVID-19 protocols, the Veterans Administration is in direct violation of Title 18 US code 373, ‘Solicitation to commit a crime of violence.’”

A heartrending compilation of nurses’ and physician assistants’ testimony against what some call the “killer vaccine” includes, among other horrors, the physical restriction of elderly patients who did not want the vaccine, but were injected anyway.

The Mayo Clinic in Minnesota fired 700 unvaccinated health care workers for their refusal to be injected with a toxic substance. Meanwhile, at Arizona’s Mayo Health, several healthcare workers have been fired after testing negative for  COVID but refusing to take the experimental vaccine. Yet Mayo allows staff who test positive but have gotten the vaccine to continue working there. You read that right.

An anonymous healthcare worker reports on the attitude of her Covidian colleagues:

Among the choice accusations they routinely trot out is that health and other reasons to remain unvaccinated do not matter; not falling into line proves that these people do not care about others, that they are clearly bad parents, and that they should not be allowed to receive health care. Even musings about these people deserving to die for not being vaccinated are not unheard of in today’s fear-driven climate.

And as for those who think on their own: “They are often not the loud, abrasive virtue-signalers prevalent today; they are more likely to speak in whispers and furtive glances, afraid of who may be listening.”

Nurse Collette Martin testified that she and her colleagues witnessed “terrifying” reactions to the COVID shots among children—including blood clots, heart attacks, encephalopathy, and arrhythmias—but their concerns were simply dismissed.

Nurse Tara Vafaeenia was escorted out of UCLA Health for being unvaccinated. “The hubris of a select few in the medical community to guarantee both the short and long-term safety of the vaccines has been seized by the media and forced upon currently healthy individuals,” she said. “I do not choose to capitulate to tyranny, threats, and illogical brute force. Additionally, the way inquisitive patients and their family members have been treated any time a vaccine has been questioned has left me seriously disillusioned.”

Ventura County nurses, going undercover, report that the deadly adverse reactions from the toxic vaccine are not being reported to VAERS by the doctors and the administrators there, resulting in “voodoo statistics.” “Or they don’t want to report that they’re seeing 80 percent of the people in the ER are vaccinated, but only 40 percent of the county is vaccinated.”

Jodi O’Malley, a registered nurse at the local Indian Medical Center, contacted Project Veritas. An undercover recording shows an angry ER doctor discussing a patient suffering from side effects of the toxic substance, stating that “The government doesn’t want to show that the darn vaccine is full of shit!” O’Malley herself has seen dozens of similarly afflicted patients whose adverse reactions have not been reported to VAERS. “This is evil at the highest level.”

What the Studies Show

Although the experience of clinical practice is legitimate, there have been a number of objective studies that have corroborated physicians’ and nurses’ clinical observations and their stand against the official narrative.

Ironically, while shouting “Follow the Science!” the COVID panic zealots willfully ignore the studies that prove that face masks are useless, that the vaccines cause several, even fatal, side effects, and that lockdowns are useless in mitigating the spread of the illness and were actually harmful.

Myocarditis among young men has also been found to occur after receiving the vaccine among the general population and in the military.

Whereas the above studies looked at specific side effects, one particular study had a global outlook and found that vaccination had a negative impact in 145 countries.

Meantime, at least 14 studies have shown that natural immunity is superior to vaccines when it comes to acquiring immunity to COVID.

Yes you’re [sic] fucking asshole of a president lied to you and so now you don’t fucking believe that people are dying at a rate that surpasses 9/11 on a daily basis, and this was fucking preventable. But the number of deaths is reconstructible about 7 fucking ways but fucking morons won’t believe that, yes, people are fucking dying. And so more people die. Fuck you for killing people.

When this shameful fiasco is finally over, the only ones laughing will be the lawyers.

PrevIsrael’s Italian Moment, in a World on Edge
Repression or Suppression in FranceNext