Something, one year on.

When I started posting a series of posts of something cheerful (uplifting, interesting, quirky, whatever) on 15th March last year I quickly decided not to carry on numbering the days of the pandemic regime for fear it would be too depressing if the days carried on too long. And I was right. I merged the odd items into an Advent calendar during December, and then, miserable over the forbidding of very modest Christmas plans I didn’t resume in January. Although I have missed selecting things of interest I didn’t think they would continue to be of interest to anybody other than myself.

I’m prompted to post now as today in the UK is a National Day of Reflection on the anniversary of the imposition of the 1st lockdown (Lockdown 3 still in effect). I’m lucky in that the only people I knew who have died with Covid on their death certificates were both very old and ill with a more serious illness at the same time. Everybody else, and some are also old and have other conditions has recovered; some didn’t even know they had it until tested. Half the adults in the country have had at least their first vaccination, and to be honest, I fear our continuing loss of civil liberties more than I do the disease. Maybe I am  seriously foolish.

But there are people mourning their loved ones, there are people fearful of their jobs, relationship breakdowns, many suffering other neglected illnesses, including increasing mental health problems, children’s education disrupted, a pandemic of loneliness, and this is worldwide…

These are something violet. Violets, growning wild along the wire netting fence round the car park of the Catholic church. One of the colours of Lent; a colour (as purple) of mourning, a spring flower, a flower symbolising faithfulness. Very pretty in its own right. Cheerful. 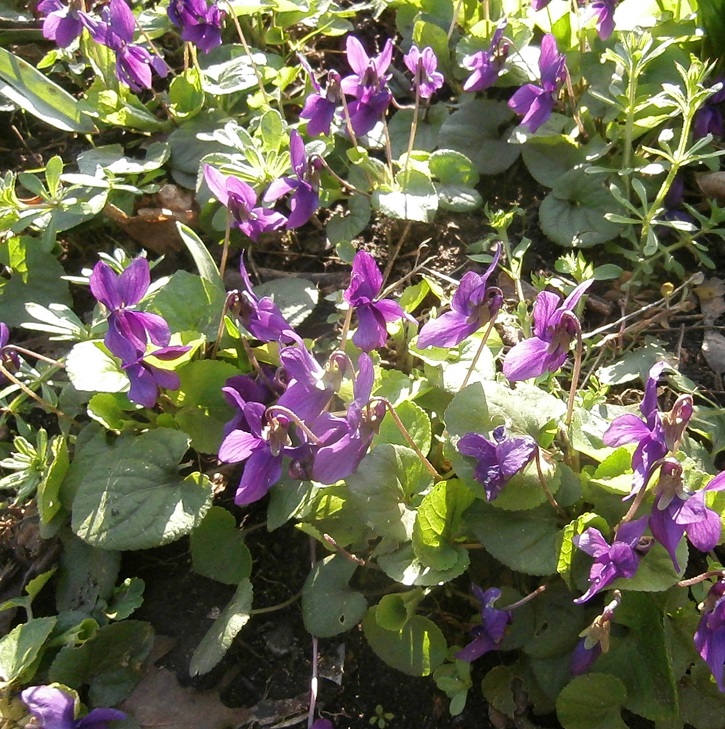 When I was a child Devon violets, on stems long enough to work as a cut flower in a small vase, were sold on the flower stalls of east London for a Mothering Sunday present at a price inexpensive enough that this child could afford to buy them. The last time I saw them was some years ago on a much fancier stall in an expensive area of the West End, and they were priced more than I was prepared to pay for a treat for myself, even on a reasonable wage.

So to see them growing as freely as they do in our built up suburb can only lift the spirits.