From The Guardian and the Independent

Spanish police have arrested a former British rapper turned Islamic State extremist, Abdel-Majed Abdel Bary, one of the most wanted militants in Europe, in a counter-terrorism swoop on Tuesday. 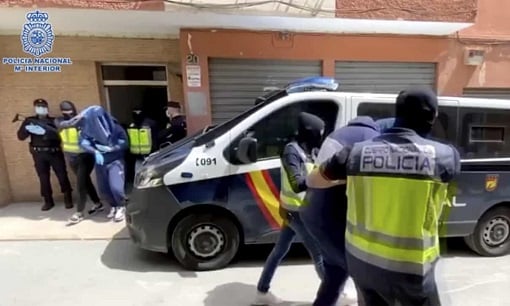 British and other sources confirmed his identity a few hours after the national police agency in Madrid said it had arrested an Egyptian national and two other men in a flat in the southern Spanish city of Almeria.

A police spokesperson said he had recently entered Spain irregularly from North Africa. Almería sits in the southerly region of Andalusia,  which has seen a rise in migrant boat crossings from Morocco. The Policía Nacional suggested that officers had received intelligence that Abdel Bary intended to return to mainland Europe via Spain and had traced him from arrival to the apartment.

Originally from Maida Vale in London, Bary was a joint British-Egyptian national but he was stripped of his UK citizenship because of his links to the terror group. Once considered a notorious Isis figure, he had disappeared from view in recent years.

Bary, 29, is the son of Adel Abdel Bary, who was convicted of US embassy bombings in Kenya and Tanzania that killed 213 people. The younger Abdel Bary was a vocal supporter of Isis from 2013 to 2015. In that time he posed with a severed head and frequently menaced the west in social media posts. In 2014, Abdel Bary was reported to have posted a photo on Twitter showing himself holding a Syrian regime soldier’s head, with the caption: “Chillin’ with my homie, or what’s left of him”.

During a brief career as a rapper in London he was known as Lyricist Jinn and L Jinny, and he performed with a group called the Black Triangle. Music videos still available online show Abdel Bary performing raps with references to drug use, violence and his family’s experience as asylum seekers in Britain. In a 2013 Facebook post, he wrote: “I have left everything for the sake of Allah.”

Abdel Bary is thought to have had a Spanish girlfriend .  . . young Spanish woman, a convert to Islam, who had come to know Abdel Bary over the internet, had sought to marry him. The 25-year-old, identified in the Spanish press as Maria de los Angeles CM, obtained a passport in the name of a friend in order to travel to meet him in the Middle East…Maria was to meet him in Istanbul, where they were to wed. However, in October 2015, as she was trying to get to Turkey, Spanish authorities stopped her at the airport, before she could leave the country, and arrested her.

The three men are to appear before a Spanish court on Wednesday and that may reveal more details about them.

PrevSomething lilac
PBS Backdating and Exaggerating the Muslim Presence in the U.S.Next