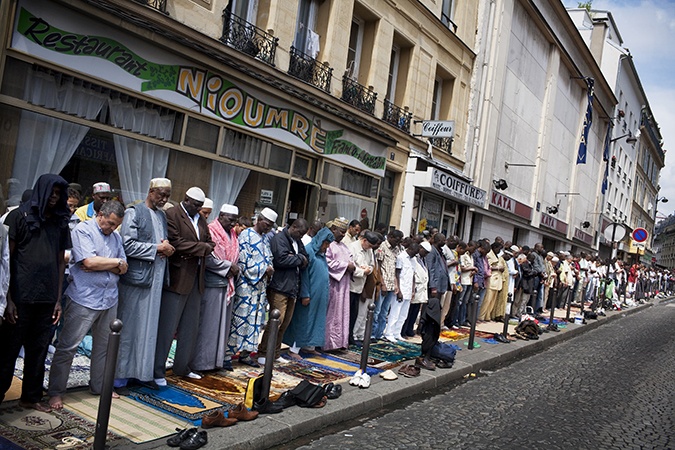 Another real and complex question for him to answer is that regarding the relationship of the French Republic with Islam. France is a militantly secular country whose militancy has seemed only to grow stronger as the Church grows weaker. France rejects all connection between religion and state; in the mouth of a French intellectual, the words très catho (very Catholic) sound more like an accusation than a description. The ghost of Marshal Pétain—who replaced “Liberty, Equality, Fraternity” with “Work, Family, Fatherland”—still rides.

Islam is perhaps about to be made an exception to French laïcité, or the complete separation of church and state. In 2003, then-president Nicolas Sarkozy set up the Conseil français du culte musulman—the French Council of the Muslim Religion. The CFCM was supposed to represent French Muslims, though two-thirds of them have never heard of it. Delegates are elected in proportion to the surface areas of their mosques; the elections are said to be influenced by the various countries that make financial contributions to the respective mosques.

Macron seeks something different. He wants to “structure” French Islam, with a view to undermining extremism and foreign influence. It is said that North African and Persian Gulf states pay some 300 imams in France; they also pay for the construction of new mosques (which is illegal). However, the financing of mosques is very murky: the mosques do not render very clear accounts, hiding behind financial regulations for non-profitmaking organizations that are much less stringent than those for religious organizations.

A Muslim adviser to President Macron, Hakim El Karoui (who, like the president, once worked for the Rothschild Bank), has suggested that there should be a Grand Imam of France, as well as an organization that concerns itself with the financing of mosques and the education, training, and payment of imams—all under the aegis of the state. In other words, the French Republic would be the ultimate arbiter of Islamic theology. This is a far cry from secularism. El Karoui himself recognizes the futility of the arrangement when he says: “Imams are trained by the state in the whole Arab world, but that has not prevented the fundamentalists from prospering.”

One proposed method of paying for the state oversight of Islam is the taxation of halal meat, which would be something like taxing Christmas pudding to pay for the Church of England. If put into practice, the proposal would no doubt raise protests, not entirely unjustified, and allegations of discrimination. Why should Muslims pay more for their meat?

You can’t treat cats as if they were sheep and corral them into cat-pens by means of trained dogs. The most that a state organization could do in this situation is to expand the bureaucracy, and create a coterie of well-paid official spokesmen, who, because of their capacity as state employees, will likely have zero legitimacy among the people for whom they are meant to speak.