Strange days. I find myself feeling sorry for Dame Margaret Hodge, MP for Barking (and bits of Dagenham) in East London.

Breitbart has an article here on the trials and tribulations she is suffering since she criticised Jeremy Corbyn.

Former Labour minister Dame Margaret Hodge has accused the party’s leadership of having a “hatred of Jews” in a damning attack on Jeremy Corbyn. She also called her hard left party leader “an anti-semitic racist.”

The comments come in the wake of veteran MP Frank Field resigning the whip Friday after accusing the leadership of presiding over a party which is becoming a “force for anti-Semitism” and a host of other actions that have dogged Mr. Corbyn’s leadership. . . footage emerged from 2013 of Mr Corbyn saying a group of British Zionists had “no sense of English irony”.

I still think she’s an awful woman. Arrogant, rude to her constituents. I’ll be more accurate; rude to her white working class constituents. She neglected them in favour of new-coming Muslims, until the old indigenous population of east London democratically elected a dozen BNP councillors to Barking and Dagenham Council then suddenly she had to take notice.  She ensured that a group of long standing popular Labour councillors were de-selected in favour of young Muslims new to the borough.  At the election of 2010 the old guard stood as ‘Independent Labour’ and got not far short of their usual number of votes. The new candidates  were duly elected with large majorities, believed to be from postal votes, which was something of a scandal in that election. 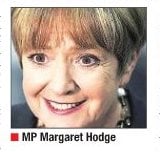 I came across her, in the flesh, at two meetings in Dagenham in 2011 when local people, of which I counted as one (and no one will remember my face now after 7 years), were concerned at the loss of local shops that would result now that planning permission/change of use had been granted to turn the premises into a mosque. The first two meetings were in the hall of the Anglican Parish Church, in the presence of the Anglican vicar, and the priest of the Roman Catholic Church opposite. They joined their parishioners in criticism of the council and the Mosque trustees over their lack of openness and community cohesion. Dame Margaret tried to have one woman thrown out (she left of her own accord) but she had no power over church premises, and the Vicar was saying the same thing, but in modulated tones.  All subsequent meetings were held on council premises, where her orders carried weight, and were by invitation only. I failed to blag my way in. The mosque opened, and the area has become more Islamic every year since.

Schadenfreude isn’t a nice way to be. Neither is muttering “do as you would be done by”, or “as ye sow so shall ye reap”, but it’s true. I wish I knew how it will end, but I don’t think the ending will be happy.

PrevAmsterdam station stabbing: police say focus is on a terrorist motive
Honor killing – coming to a neighborhood near youNext