French jihadist Tyler Vilus appeared before the Paris criminal court on Wednesday for the start of a week-long trial into his role within the Islamic State armed group where he is accused of serving as an ‘emir.’ He faces life in prison.

Well-known in France’s extremist circles, Vilus is accused of belonging to a terrorist organisation, commanding a group of ISIS militants and ‘aggravated murder.’ He took the dock on Thursday sporting thin pleats, short beard and black designer polo shirt.

His trial–the first in France for crimes committed in Syria–is a big catch for the French justice system as it seeks to prosecute returning terrorist fighters.

Thirty-year-old Vilus is like no other. A close friend of the mastermind of the 13 November attacks in Paris in 2015, he has always been suspected of being the “twelfth man.” 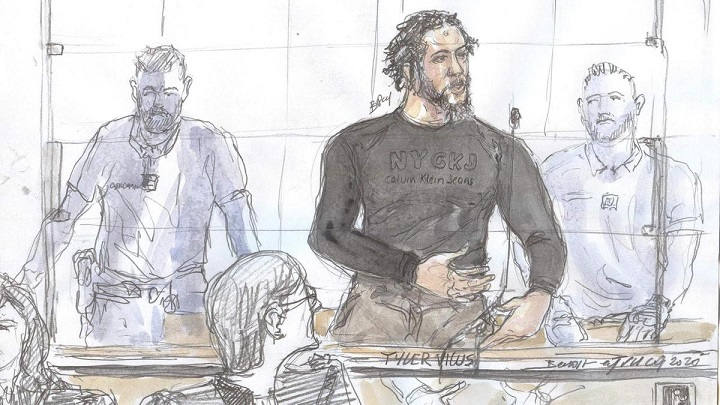 His case dates back to July 2015 when he was arrested in Turkey travelling on a Swedish passport.

Barely arrested, Vilus managed to raise the alert from his phone by sending messages to a Turkish number that were later intercepted.

His correspondent turned out to be Belgian jihadist Abdelhamid Abaaoud, the mastermind of the Paris attacks. He told investigators later that he made Abaaoud believe he was planning an attack when in fact he was trying to leave IS to travel to Mauritania. Among the first French-speaking fighters to leave for Syria, Vilus and Abaaoud established close ties in the self proclaimed caliphate of Islamic State.

While there (Syria), he frequently welcomed his mother, Christine Rivière, nicknamed “Jihadi Granny.” Vilus sent several messages to Rivière—later seized by investigators—relaying how he had become not only a police officer but an emir to a group of French fighters. His mother is said to have replied: “I knew you’d do well, you’re made for that.” Rivière was jailed for ten years in 2017 for belonging to a terrorist organisation and financially supporting ISIS. She told investigators it was ‘normal’ that she send her son money.

Vilus is described by investigators as wearing multiple hats. He is alleged to have been a recruiter, fighter and a member of ISIS’ police. Originally from Troyes in Eastern France, Vilus first attracted the terror group’s attention by posting videos of propaganda on social media.

In April 2015, he was captured in a video by ISIS showing two members of the Syrian Free Army being executed. The images show Vilus in uniform, with a keffiyeh scarf on his head to protect him from the sun, a walkie-talkie in his hand and a weapon in his belt. Vilus is not suspected of being one of the hooded executioners but he is seen containing the crowd. “I had no role in this execution. I had just left the mosque,” he later told investigating judges.

Judges will be tasked with deciding the extent of Vilus’ involvement in the armed terror group and whether he should be put behind bars for life.