Swinging on a Star in Washington 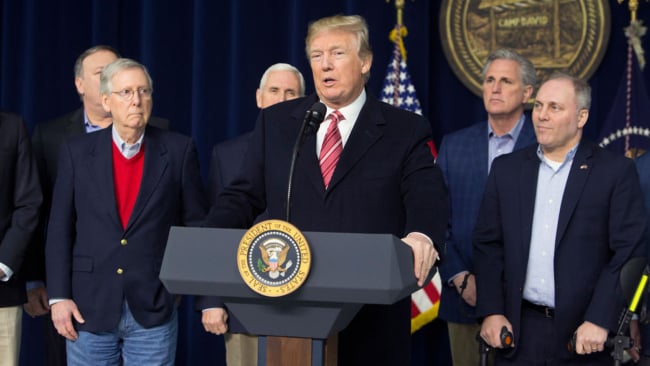 “And by the way, if you hate to go to school you may grow up to be a mule.” In the compelling if sometimes soap opera-ish  British TV series The Crown, Season 1, Episode 7, the young Queen Elizabeth who has been taking private lessons at Eton becomes aware of the complex issues facing Britain. Almost admitting she didn’t know what she didn’t know, she complained to her mother, “I know almost nothing,” and admits to a new tutor, “I can’t keep up.”

Elizabeth was more forthright regarding the extent of her abilities and truth about them than Niccolo Machiavelli suggested was desirable in a ruler. It is unneccessary, he wrote in The Prince, xviii, “for a prince to have all the good qualities I have enumerated, but it is very necessary to appear to have them.” More simply in modern day language, to fool the people is the ruler’s only thought.

Truth, deceit, and political partisanship, have combined to form a heady brew in the attributions and remarks made about President Donald Trump presented in the new book, Fire and Fury inside the Trump White House, written by Michael Wolff. The author is clear in his intentions. The story is meant to show that the emperor has no clothes, and that the revelations in the book will end the Trump presidency, though he does admit that he does not know if all the claims in the book are actually true.

The most provocative accusations in Wolff’s book, particularly those by Stephen K. Bannon, are not simply that President Trump is uninformed, undisciplined, has a short attention span, is erratic, uninterested in learning, and generally is not equipped to be president and incapable of doing his job in a chaotic White House.

The most serious charge is one of a mental problem, that the gentleman is a dope, Trump is an idiot, a dope, or dumb. In a sense it is reminiscent of the issue that President Ronald Reagan had suffered from a problem, a brain disease, dementia, while in office, and for which he was officially diagnosed in 1994. In his angry rejoinder to the book, Trump has asserted his two greatest assets are his mental stability and being really smart, in fact a “very stable genius.” He claims to have been an excellent student, and to have gone to the best colleges.

Rational criticism of Trump and his policies are important in the present political environment. Different opinions about domestic or foreign policy, or the significance of meetings with Russian lobbyists or lawyers, or Russian interference in the 2016 presidential election, or indeed whether operations in the White House are or were chaotic, are essential. They are more relevant for public policy than the question of whether Trump is a paranoid, not fit to hold office because of his mental state.

One will admit that Trump is no Winston Churchill, indispensable, insightful and audacious, but also impulsive and erratic at times, characteristics which Trump shares. Indeed, Trump is an unusually volatile personality, impulsive, narcissistic, obsessed with critics, a vivid and unusual speaking style, reads very little, has populist passions, and insists on restricting immigration, but these qualities and political positions do not imply he is mentally ill. It is remiss in his case, as in all others, to use medical terms indiscriminately, and reach supposedly psychological conclusions without personal examination.

Certainly, there is no unanimity on the sanity issue, just to take a few examples. Perhaps most striking are the remarks on January 6, 2018 of British Prime Minister Theresa May: “When I deal with him (Trump) what I see is someone who is committed to ensuring that he is taking decisions in the best interests of the U.S.”

Nor is there any doubt about Trump’s sanity on the part of Palestinian officials. After the President’s recognition of Jerusalem as the capital of Israel, a decision approved by Congress more than a decade ago, and his tweet on January 2, 2018 threatening to cut aid to the Palestinian Authority because they “don’t want to negotiate a long overdue peace treaty with Israel,” the Palestinan spokesperson , who never negotiates, accused him not of insanity but of dashing hopes of future peace efforts.

Nor are the leaders of Pakistan unaware that the Trump administration has acted in rational fashion in the decision to freeze all security assitance, more than $1.3 billion, to their country until it takes a tougher stance against terrorist groups.

The criticism of Trump is not the first time that partisan politics has challenged the rationality or sanity of presidential decision making.  Perhaps the most notorious were the accusations that Nancy Reagan had influenced President Ronald  Reagan’s decisions on the Iran contra and other issues following advice she had received from an astrologer.

It is a truth universally acknowledged that Trump has a low regard for reporters who in return are not members of his admirers. But he is not alone in this. This was shown in Paris in the New Year’s meeting of President Emmanuel Macron with reporters whom he lectured to abide by a set of rules, principles and code of ethics. No one doubts the mastery of French politics or the intelligence of the well educated Macron, let alone his ambitious role for France a a “strong country with a universal pull.” Yet, he was critical, as is Trump, of “fake news,” and plans a law to limit them.

The controvery over the ability of Trump to be President brings up the issue of the degree to which modern rulers in democratic  countries are and should be prepared, through education as well as innate intelligence, to deal with national and world affairs.

Comparative analysis of modern times in the U.S, Britain, and France, suggests a strong connection between education at elite institutions and those who become leaders. In the U.S, all presidents from Ford on until Trump have attended law school or business school at Harvard or Yale, while Clinton attended Oxford as well as Yale. Interestingly, only Woodrow Wilson had a Ph.D.

In Britain those who disproportionally attended elite schools win the glittering prizes; school at Eton or Harrow, attended by 19 of the 54 British prime ministers, followed by Oxford (27, including PM Theresa May)  and Cambridge (14).

In all three countries, the problem has arisen of whether the successful leaders are part of an out of touch elite, prone to group thought, in an age when traditional parties and institutions are under attack or being bypassed. More than concentrating on the alleged mental problems of the U.S. president it is more worth while to examine why, in an age of globalization, immigration issues, declining trade union memberships and populist outbreaks, social democracy and the center left is in retreat in so many democratic countries. Are citizens carrying moonbeams home in a jar?

PrevChesler Video Interview on the Survival of Western Civilization
The Astute William Kilpatrick, of Boston College, Points Out Some Implications of Western-World Leaders’ Reactions to Trump’s Proposed Embassy Move to JerusalemNext