Tennessee’s New AG: Good for the State, Great for the Country 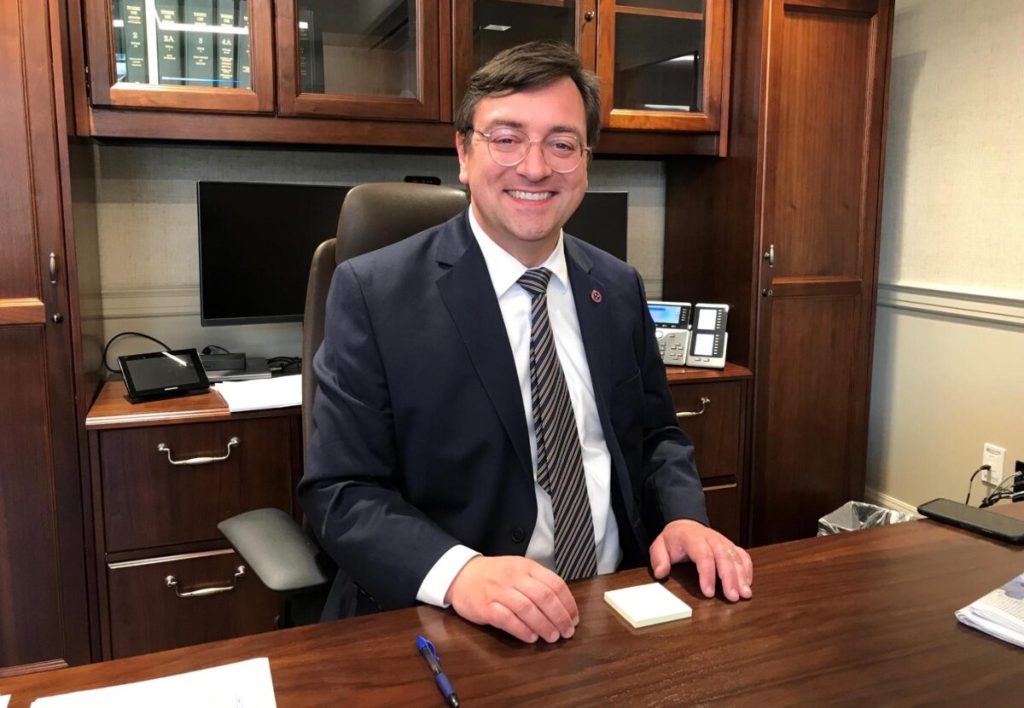 Encourage those red-state AGs, because they can be our saviors—at least to some extent. Unfortunately, they are limited in what they can do in the ever more crucial crime area that is under the control of those city ideologues who have more sympathy for criminals than their victims.

Nevertheless, the state AG’s role can be a significant counterweight, and possibly more.

Take my home state of Tennessee—an odd but interesting case. By dint of its constitution, this state’s attorney general is not elected by voters but appointed by its Supreme Court, and for the lengthy term of eight years.

That might not sound all that democratic, but sometimes the stars are in such alignment—or the deity really is blessing America in her time of need—that the person appointed is better than we all could have elected or even hoped for.

That was my impression when I sat down with Tennessee’s new attorney general Jonathan Skrmetti in his office in the John Sevier Building, a tomb-like edifice in downtown Nashville.

He is a personable fellow with the requisite bona fides, undergraduate degrees from Oxford and George Washington University, and a law degree from Harvard.

The latter is not quite as impressive as it used to be considering how “woke” and supportive of “cancel culture” our most vaunted law schools have become. But it was obvious Skrmetti would have no part of that.

We discussed a number of issues I will get to, but my only hesitation with the AG’s admirable views was one many have with all public figures, appointed or elected.

Yes, he can talk the talk, but will he walk the walk?

Well, he already did.

In the 10 or so days since I met with him, he has taken the legal lead on two issues—nationally.

The most recent concerns what is arguably the most controversial hot-button issue of our time, the supposed rise in gender dysphoria and the concurrent disturbing increase in transgender surgeries among our children.

Critics of this trend were recently able to get a halt to an epidemic of such surgeries at Vanderbilt University Hospital, which were, not inconsequentially, highly remunerative to the institution and its doctors.

“We, the undersigned State Attorneys General, write to express our deep concern with the recent letter you received from the American Academy of Pediatrics, American Medical Association, and the Children’s Hospital Association asking you to investigate and prosecute people who question the medical establishment’s current treatment of children struggling with gender dysphoria. You cannot and should not undertake such investigations or prosecutions.

“We emphatically agree that anyone engaged in violent crime or threats of violence should be investigated and prosecuted by the appropriate authorities. But the medical organizations are asking you for much more than that. They are asking you to direct the criminal enforcement power of the federal government not only at those committing or threatening violence but also at those whose speech may ‘provoke’ such threats.

“We respectfully demand that you stand down and allow the national conversation to continue. Now is a time for more speech, not less.”

You may think, “Well, this is only a letter.” And that’s true. (The Tennessee Star has the full letter.) But we are in an era when “lawfare” has become the national bloodsport, all too often with the citizens bearing the brunt of its results, while having no say (no vote) in how those results came about.

Skrmetti has stepped forward to do legal battle on our behalf in a country that has, heaven help us, 75 percent of the world’s lawyers. According to the American Bar Association, there are currently 1,116,987 attorneys practicing in the United States. Good grief! (By comparison, there are only 276,986 plumbers.)

He is also up against Garland, who is arguably the most extreme-left attorney general our country has ever had. Winning a “lawfare” battle with him, when Garland has the odds heavily stacked in his favor, will not, to say the least, be easy.

But it must be joined.

Just after my meeting with him, Skrmetti also took on Health and Human Services Secretary Xavier Becerra on the not-unrelated subject of proposed legislation regarding Section 1557 of the Patient Protection and Affordable Care Act (ACA), this time with the backing of 20 (!) red state attorneys general.

From a press release, “Skrmetti notes that the Department’s proposed redefinition of ‘sex’ to include ‘gender identity’ would deviate from the language of the statute, promote sex-based discrimination, threaten constitutional rights, and create unnecessary obstacles for healthcare providers.”

As we all know, language counts. That’s why the left is always changing it.

Here are excerpts (recorded verbatim with the most minor corrections) of other areas I discussed with Tennessee’s new attorney general.

1. On how the DA’s role has become more important than that of the mayor in the life of a city.

“I think a bad DA can kill a city more than a bad mayor can. Crime takes over. The economic engine of the city stalls out, you know. If you have crime and education problems, your city’s gonna die. You can’t let that happen. And obviously, you know, we have a few big cities in Tennessee, Memphis, Nashville, Chattanooga, Knoxville. And there are some significant crime issues that have been increasingly prominent, of course. Memphis a few weeks ago had its worst week since Martin Luther King was assassinated, right? It was horrible and you know, you have a DA there who ran on a very criminal justice reform-oriented platform.”

2. On the politicized FBI and military.

“We need everybody to be proud of the fact that we have an FBI and a military that’s completely divorced from the political tides of the day. And there has to be a commitment to both institutions—whether it’s the bureau or the military—to the country, and people need to recognize that a life of public service is a life of sacrifice and they are giving all of the opportunities that they would have in other sectors up so that they can serve, and serve an important and meaningful role. And I think we’ve lost a lot of that culture as people are concerned about potential media fallout, potential media opportunities. Everybody wants to write a book and then, you know, find jobs that leverage what they did and, you know, you end up kowtowing to whoever the cultural powers in the elite spheres are, rather than focusing on an absolute and unyielding commitment to the law.”

3. On how a state attorney general can help return education to an impartial experience.

“So there’s some legislation we have that’s crafted to limit supercurricular or extracurricular commentary by educators that would propagandize students. It was very hard fought. There have been a lot of concerns about First Amendment issues there. But I don’t know that that covers all of the concerns that you’re raising. I think school choice potentially provides an avenue of relief there and we’ve been defending the state’s laws. With respect to school choice, we’ve got a pretty limited pilot program right now that’s been the subject of fierce litigation. Incredible opposition to the idea of allowing even the most disadvantaged students in the school districts, who have had the most difficulties, to have any alternatives. So we’re fighting that fight. It’s up to the policymakers whether or not they want to expand that opportunity. And then at the collegiate level, we’ve got some legislation that seeks to limit the ability to propagandize. We also have some very strong free-expression legislation that’s consistent with and maybe even more robust than the First Amendment protections. Personnel is policy.”

4. On the consolidation of corporate power and ESG.

“We’re really concerned with the consolidation of corporate power, and with efforts by big corporations, especially big international corporations, to decide social policy. ESG [environmental, social, and corporate governance] is the main label now. Some people call it ‘woke capital.’ I don’t think either of those sufficiently captures the dynamic. I think we need to start talking about it as just an oligarchy. You’ve got people who control tremendous amounts of the market and tremendous amounts of wealth. They have a lot of leverage. And let me frame this by saying it’s a free country—if you’ve got a bunch of money, God bless you. … But what you can’t do is use the leverage you have to rewrite how society functions. … We’re seeing in the environmental sphere, where you have corporations pushing hard to limit the available financing for fossil fuels for the internal combustion engine, where they have these longer-term social engineering goals involving the energy sector that are divorced from providing their current customers with what they need—a decent life.”

PrevBiological realities: Only nature and God ‘assigns’ an infant’s sex at birth
The Economics of EnvyNext