Terror trial begins for NYC man accused of training ISIS snipers: ‘He taught them to kill’

The ex-wife of an accused radical who abandoned America and his family to become an ISIS sniper told jurors on Monday that his terrorist transformation seemed like something out of a movie. 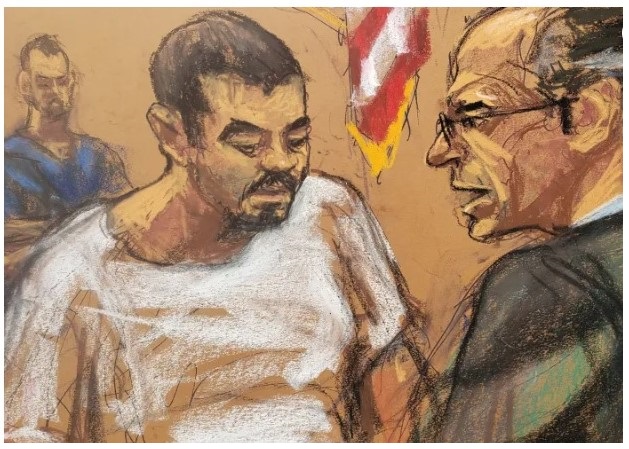 Ruslan Asainov’s former spouse testified at his trial in Brooklyn Federal Court on charges that he conspired to provide material support for terrorists while training snipers for ISIS.

She said the loving husband and father-turned-violent-extremist sent his estranged wife pictures of dead soldiers and photos of himself in camouflage holding an assault rifle to show his commitment to the terrorist cause.

After Asainov abruptly pulled up roots in the U.S. in 2013 and made his way to Syria to become a “warrior, sniper and sniper trainer” for the jihadi organization, he and his wife remained in contact, though their exchanges were tense, she said. In late October 2014, he sent a series of messages in response to seeing photos of their daughter dressed in a Halloween costume.

“We are dying here to get rid of these holidays and my daughter is participating in them,” Alexandra Asainov recalled him as saying. Then he sent a photo of three dead men in green fatigues surrounded by bloody boot prints with a message, she said. “These guys are my friends who died in the last battle which I participated in,” he wrote, according to her testimony. “Do you know what for? So all of this will not exist.” After that, she cut off contact…

Prosecutors said Asainov gave weapons training to dozens of other ISIS members and tried to get money and equipment for the terrorist organization, including night vision scopes.

Asainov left the U.S. and made his way to Syria to become a “warrior, sniper and sniper trainer” for the notorious jihadi organization, according to prosecutors.

Asainov, a naturalized U.S. citizen, was born in Kazakhstan and lived in Brooklyn between 1998 and 2013. He married in the U.S., had a child and converted to Islam in 2009, prosecutors said.

Even though he was still married in Brooklyn, he took another wife in the Syrian city of Taqba and had children with her, the feds say. Asainov was detained in Syria and brought back to the U.S. in 2019 to face federal charges.

His lawyer Susan Kellman said Asainov, a religious Muslim, left the U.S. to live in Syria. “He wanted to live under Sharia law,” Kellman said. “In the government’s opening, you heard a lot of scary words, words that scare me to death. Words like ISIS, terrorism, battle. You have to put them aside and listen for evidence, facts.”