Thanksgiving and the Mayflower 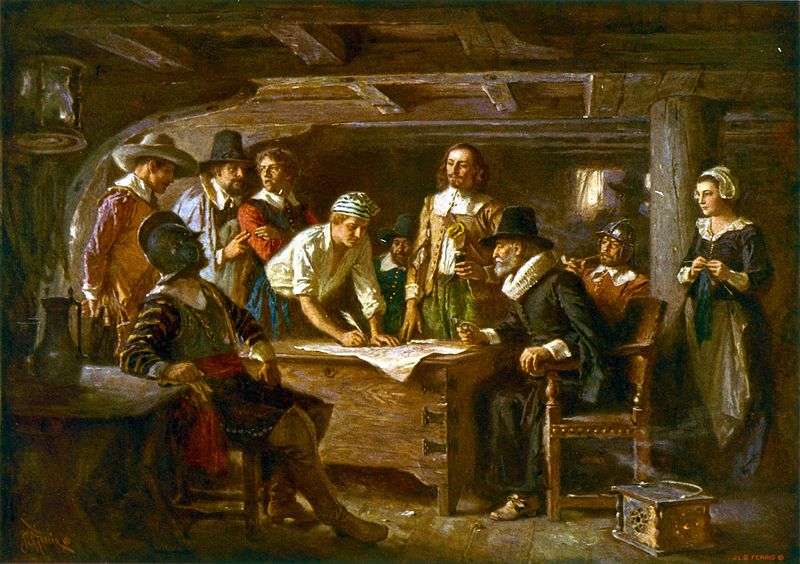 Thanksgiving Day parades have largely been cancelled in 2020 because of the Covid-19 pandemic, but balloons and floats are symbolically celebrating the harvest and other blessings of the past year. Celebrations for harvest were common in many civilizations such as those of the Greeks, Egyptians, Romans, Native Americans, but the American version stems from a particular incident in the 17th century. American Thanksgiving is modeled on a three day harvest feast shared by Pilgrims, who had landed in the New World in 1620 and Native Indians, the Wampanoag, in November 1621. Interestingly, turkey, stuffing, mashed potatoes and cranberry sauce did not seem to be on the menu, but rather deer and seafood. Turkey, became the meal of choice in the mid 1850s, especially after President Abraham Lincoln declared Thanksgiving a national holiday in 1863. It has been celebrated and eaten since then, except when President F.D. Roosevelt changed the date for a short time, on the fourth Thursday of November, a day on which Americans eat more than on any other day of the year.

Thanksgiving is therefore linked historically with the original Pilgrims, seeking religious freedom in the New World, and are connected with the origin of American society. There are perhaps only ten million Americans who today can trace their ancestry back to them. But they did number Humphrey Bogart, and Presidents John Adams and James Garfield. More than half of the original settlers died during the first winter as a result of poor nutrition and housing.  The rest were helped by Squanto, an English speaking Native American, a member of the Pawtuxet tribe  who taught them to plant corn and where to fish and hunt beaver. He was the mediator between the Pilgrims and the Native Americans and therefore responsible for the harvest festival.

Times have changed since the Pilgrims got a shock when they landed on Plymouth Rock. So have the meaning and significance of that landing four hundred years ago and its consequences to the birth of the American nation. On November 21, 1620 the Mayflower, a three masted ship which had sailed from England on September 16, 1620, after a voyage of 65 days, arrived at Cape Cod, Provincetown Harbor. It contained 102 passengers and 30 crew. Of the 50 men on board, only 41 were “Separatists,” true Pilgrims, the group who wanted to leave the Established Church and engage in secret worship, people who had left England to live in Leiden, in the Dutch Republic, a wealthy  maritime power, and a more religiously diverse and tolerant place than England. In 1608 this group, in revolt against the Established Church, decided to go to Virginia, and set up their own colony. The rest of passengers on Mayflower were “Strangers,” who were selected by the Merchant Adventurers, a joint stock company of financial backers for colonial expeditions who funded the Mayflower. The passengers included indentured workers but no slaves.

The Mayflower had intended to lay anchor in North Virginia since the Pilgrims had signed a contract with the Virginia Company, a trading company to colonize parts of the east coast of the New World. They had intended to   settle on land near the Hudson river in north Virginia. The Pilgrims did not have an official patent to settle in New England and therefore on November 21, 1620 , while on board the ship they signed before landing, and inhabiting Patuxet, Plymouth, what is known as  the Mayflower Compact.  The original of the document has been lost, but copies of notes have survived with information of the text and the individuals who signed, one of whom is sometimes remembered today, Myles Standish, a military officer  hired by the Pilgrims as their military leader, and a man who later enforced the new laws and protected the colonists.

The Mayflower Compact is a short document, signed by 41 passengers, all male, and no women, written by “loyal subjects of our great sovereign Lord King James.” They had undertaken to plant the first colony in the northern parts of Virginia  for “the glory of god, the advancements of the Christian faith, and the hoor of king and country.” What is crucially important is that they agreed on a Covenant, a civic  body politic, which would enact, constitute and frame just and equal laws, ordinances, and offices, for the general good of the colony. To this they promised all due submission and obedience.

The brief compact  can be seen as a mini constitution, a statement of unity, the first governing document of the New World, a model of  self-government, a covenant derived from the consent of the governed. The self-government lasted 70 years until 1691 when the Plymouth colony became part of Massachusetts Bay colony. More settlers arrived, thereby leading to an early form of representative government, a  General Court, a hold over from the Bay Colony, being set up, to which each town elected representatives to attend the Court.

The Mayflower Compact was a Covenant, a religious concept, but one that echoes politically with its emphasis on unity, consent of the people, and just and equal laws. It was significant that the Pilgrims, not British officials in London, chose their own governor, John Carver.

John Quincy Adams declared the agreement the original American social compact. As a result of current protests against racism and colonialism, not everyone accepts this view. The argument is made by some who see the Compact as systematic of colonialism, not of liberty.  The most extreme challenge has been, in the New York Times, the  formulation of the 1619 project, the assertion that 1619 was the true birth year of the American nation, not 1776 the normally accepted year. The reason given is the fact that in August 1619 a ship carrying 20 or more slaves fwho came from the area now Angol , was captured  from a Portuguese ship by pirates. It  landed at Point Comfort in Virginia, where the pirates sold the slaves to Jamestown colonists. Critics have argued this was the beginning of slavery in America , and that these slaves can be considered  “founding fathers” since they see slavery as the basis of American economic growth. In this view, slavery and its consequences are put in the very center of the American story.

This 1619 Project is essential political propaganda not history. This is not to disparage the pain of black experience or deny the reality of slavery and segregation, but to argue as the Project does that the 1619 incident is more important for America than 1776 or 1787 suggests a lack of moral compass. It should not deprive anyone of their turkey.