The Affliction of Toppling 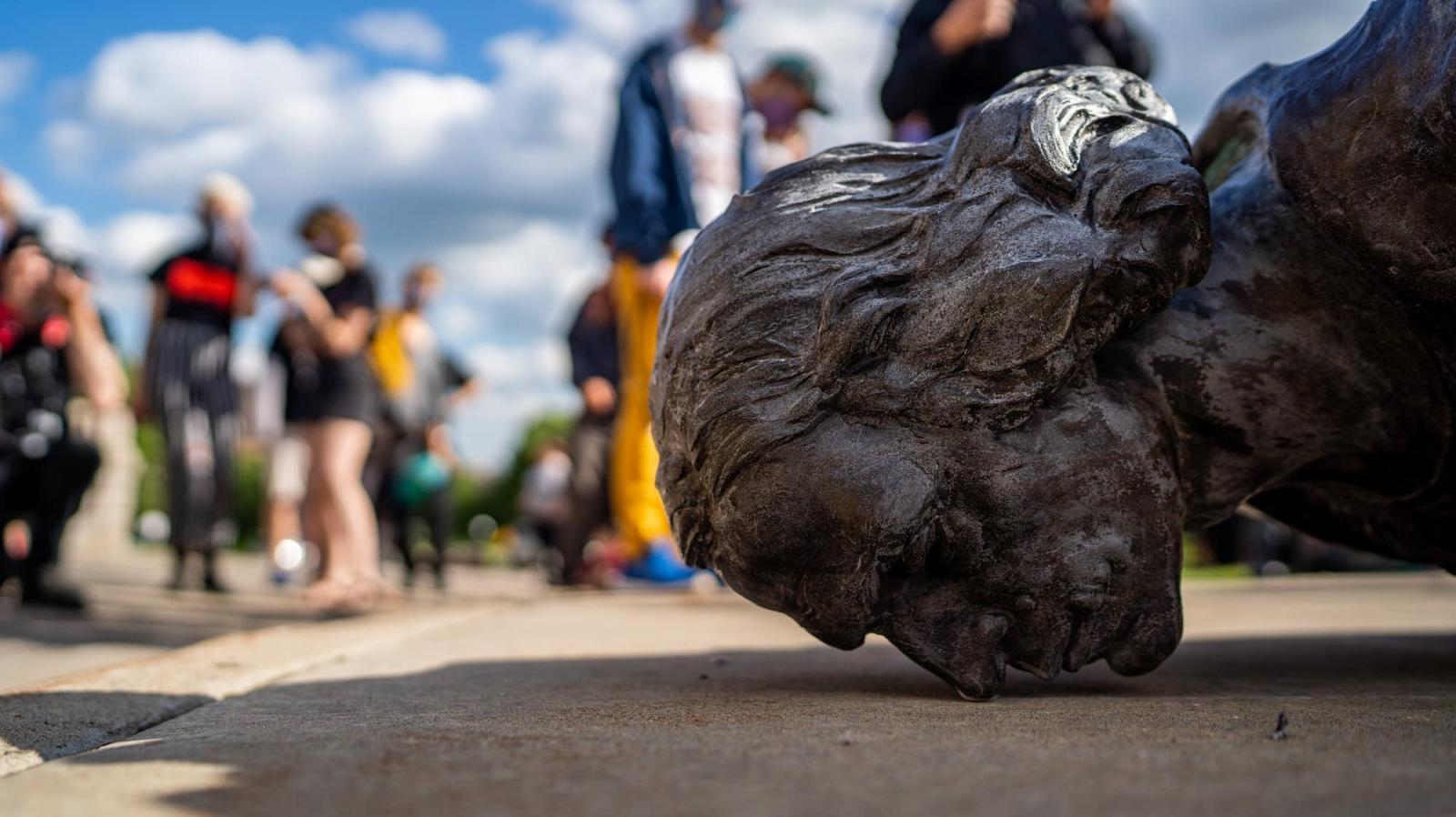 The evil that men do lives after them; the good is often interred with their bones.

We know that Christopher Columbus sailed the ocean blue in 1492. This voyager from Genoa Italy, was bound for Asia, and never did touch the land of North America, but landed in the Bahamas on October 12, 1492. Columbus the heroic voyage completed four voyages across the Atlantic, established a colony in Haiti, leading to European exploration and colonization of the Americas. He has long been venerated but in recent years has been criticized for his activities   that led not only to colonization but to the transatlantic slave trade, the death of millions from murder and disease, and the imposition of slavery in the Bahamas.  Images of Columbus have been defaced or removed throughout the U.S., in Boston, Pittsburgh, Raleigh, Sacramento.  Columbus Day, which became a federal holiday in 1937 has been renamed Indigenous People’s Day.

The downfall, physical and ethical, of Columbus can be considered as another example of the process   in which considerable parts of the public heritage in the U.S., and in the UK, are being rewritten or erased.   On October 11, 2020 protestors in Portland, Ore.  toppled the statues of Abraham Lincoln, hitherto celebrated as the president who ended slavery in the U.S., and Theodore Roosevelt and damaged the Oregon Historical Society in demonstrations called Indigenous People’s Day of Rage against colonization and the treatment of Native Americans.

It is time to reflect on some related issues: should judgements be made about people in the past based on accepted values today; and who should be admired and honored or disdained and relegated to the dustbin of history? An incident in San Francisco is revealing. Citizens in the city were asked who should be honored in Coit Tower to replace Columbus: the first five mentioned were the Ohlone people, (a local tribe), California firefighters, St. Francis of Assisi, Harry Milk, and Lillie Hitchcock Coit, followed by Robin Williams, Willie Mays, and Joe DiMaggio.

It is salutary that we should learn from history, not rewrite it. In the present political climate, we are all involved in a history lesson, assessing the actions and figures of the past, some well- known and others obscure, and evaluating moral issues related to them. It is appropriate to acknowledge the injustice, slavery, prejudice, racism, and discrimination that was part of the Western past , but equally to appreciate this is not the full story of countries that advanced civilization. Categorical assertions expressing feelings of righteousness without nuance about the iniquity of the U.S. and Western systems and heated exaggerations are not helpful for full understanding of the historical record.

There may or may not be herd immunity to Covid-19, but there is no herd immunity to political nonsense and bad behavior. Indiscriminate violent protests tend to ignore the complexity of behavior in individuals and in societies. To take one example of an individual, how should one judge the well- known writer Graham Greene, almost universally recognized as a highly gifted writer, but addicted to  drink, opium, adventure, promiscuous sexual behavior, a man familiar with both the monastery and the brothel, and  perversely believing that holiness can coexist  with imperfection. Similarly, the dilemma exists in challenge of large parts of the public heritage of nations by abrasive behavior or by rhetoric employing technique of the magician who achieves feats by misdirection, drawing attention of the audience to one thing to distract it from another, in essence producing an inaccurate picture of reality.

In the UK statues are toppled, street names are changed, and teaching is qualified by revelations about British complicity in the slave trade. Forgotten or neglected is that slavery was abolished in 1807, and that the UK  spent up to 2% of its national wealth patrolling the North Atlantic to stop the slave trade. Genuine outrage over racial injustice and allegations of police brutality is judicious but it is also wise to consider all perspectives in historical appraisal.

Consider a number of historical figures who have been polarizing individuals in considering the part. Theodore Roosevelt and Abraham Lincoln were most recently toppled in Portland on October 11, 2020. The statue of Lincoln was spray painted with Dakota 38, a reference to 38 men executed under orders from Lincoln after the Dakota- U.S. war of  1862 in what was the largest mass execution in American history. Yet, Lincoln commuted that sentence for 265 others. Theodore Roosevelt was undoubtedly hostile to Native Americans and removed them from their lands, but he was also a conservationist, placing more than 230 million acres under public control, and creating national parks. At Princeton the name of Woodrow Wilson, the 19th president of the U.S., had been removed from its public policy school. Now the University undergraduate residential Wilson college has become Melody Hobson college, named for the African- American business woman who graduated at Princeton in 1991.

The less well-known have been targeted as well as prominent and familiar figures like Columbus, unloved in many places in the U.S., or Frank Rizzo in Philadelphia.  Some of the many are generally unfamiliar; William C. Wickham in Richmond, Va., Richard Schuyler in Albany, N.Y., Orville Hubbard, in Dearborn, Mich., Edward W. Carmack, in Nashville, Tenn.

The UK is going through a similar experience of toppling famous and less well-known, but becoming more familiar, figures for reasons akin to those in the U.S.  The famous include Winston Churchill, Oliver Cromwell, Charles Dickens. Among the less known are Robert Milligan, and Henry Wessell-Fox, Lord  Holland who owned 401 slaves.

The National Maritime Museum in Greenwich, London, is “reviewing its Admiral Lord Horatio Nelson displays to reveal British links to slavery, and the history of race and colonialism in British history. The focus is on Nelson, Britain’s best known naval hero, on the grounds he supported slave holders, West Indian planters, and colonies, was a white supremacist, and was critical of William Wilberforce, the advocate of the abolition of slavery. The Museum has on display a portrait of Nelson and has the bullet fired by a French sniper that killed him at the Battle of Trafalgar in 1805 his remarkable victory over the French-Spanish fleet.

Extremists have also called for the elimination of Nelson’s 52 meter-high statue in Trafalgar Square. Not only would this be act of extraordinary cultural vandalism, and a deprivation of a landing place for pigeons, but it would ignore the fact that there is a figure of a black sailor cast in bronze in the bas relief of the statue.

Besides reassessing Nelson, the Greenwich  Museum, concerned with the Royal Navy’s link to slavery,  has already changed the statues of Sir Willam Sidney Smith, who beat Napoleon at the siege of Acre in 1799, and James de Saumarez who was notable at the Battle of Algecias in 1801. The museum has already addressed the colonial legacies of Captain James Cook,  Francis Drake, and Admiral Edward Pellew.

Other British institutions and museums have already disposed, or are prepared to dispose of parts of British history. Thomas Guy has gone from King’s College, London, Thomas Picton from Cardiff, Edward Colston from Bristol, Sir Hans Sloane, physician,  naturalist, collector who gave 71,000 items to the nation, from the British Museum, Cyril Ratcliffe from Warwick University.

There is pressure on a building in East London, near the Hoxton underground station, to remove the statue of Sir Robert Geoffrye. He was a merchant, slave trader, Lord Mayor of London, in the 17th century, involved in the East India Company, the Royal African Company, and part owner of a slave ship. He financed in East London the building of 17 almshouses that later became the Geoffrye Museum, portraying living spaces and domestic artifacts through the centuries. In 2019 it was renamed  Museum of the Home. For the moment his statue remains intact.

Toppling is not confined to the U.S, and the UK. It has now emerged in Canada. Sir John  A. Macdonald , first Canadian prime minister, lawyer and business man, whose face was on the $10 bill and replaced by that of a black business woman, was toppled in a public square in Montreal. He has been attacked as a person  who tried to wipe out native culture, and accused of being a racist partly because he started a school program for indigenous children  in which their native languages  were banned, considered as cultural genocide. He is also  accused of preventing  food relief  for indigenous people and driving them out of the way of the path of the transcontinental railway which was Macdonald’s great contribution.

The Macdonald  story is illustrative of the toppling issue. He is a controversial figure and his activity was partly responsible for the fact that the plight of the Indian population has long been invisible. But he did not cause the famine which affected that population , and he did lay the foundations of modern Canada.