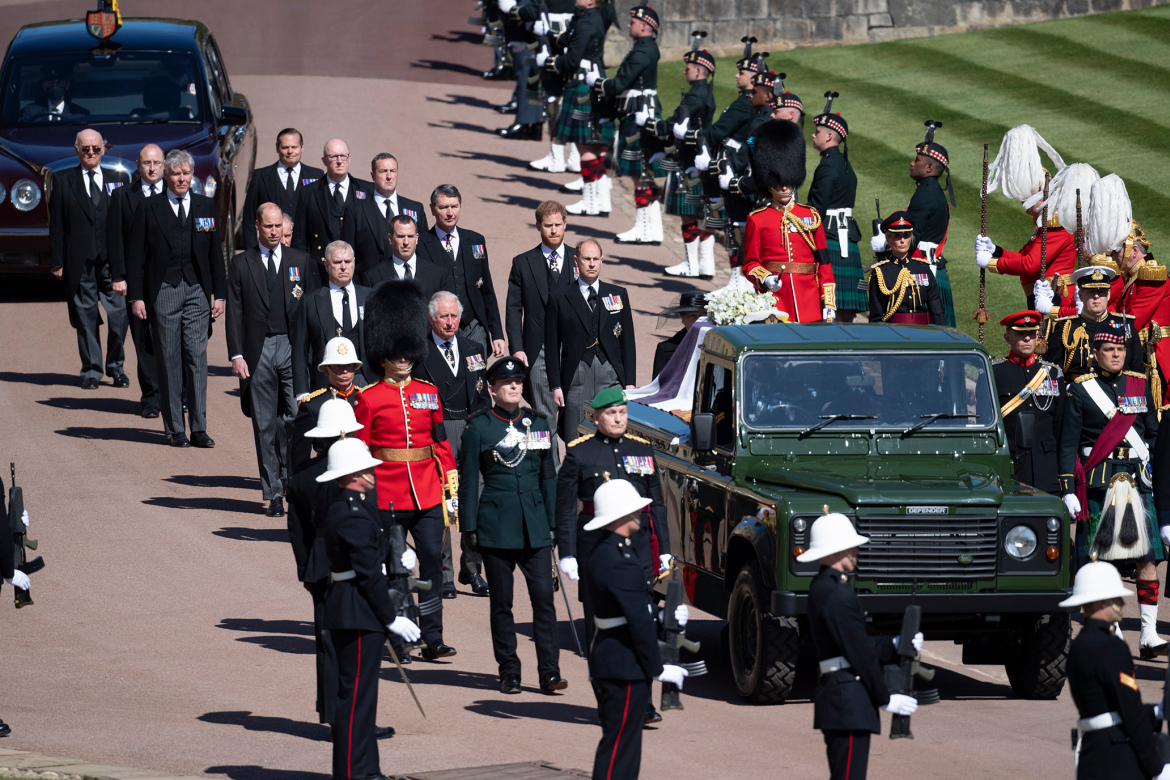 I respect my elders but it’s getting more and more difficult for me to find someone older than me.

The funeral of Prince Philip, Duke of Edinburgh, at Windsor Castle on April 17, 2021, an emotional if muted affair, arouses mixed emotions. It was a sad personal family farewell but also an event of public significance, political and military, and a spectacular display of pageantry. The setting itself was symbolic of British history, Windsor Castle where ten kings have been laid to rest. The royal procession proved a collaboration of the various branches of the armed forces, military bands, royal marine buglers, and an honor guard from all the armed forces. Symbolically, the naval cap and sword of Philip, a gallant officer, were laid on his coffin.

Because of precautions concerning COVID-19 this was not a large scale military procession, and for tactical reasons to avoid family tensions, the Royal Family did not wear military uniforms. Nevertheless, pomp and ceremony were in evidence with ceremonial gunfire at nine locations across the UK and Gibraltar while a minute of national silence was observed.

The funeral was elegant, dignified, poignant, soiled only by physical reminders of the dissension between the princes, William and Harry, and the virtual self-inflicted isolation of Harry in his own country. This ceremony, with its roll call of history and duty, was a stark contrast from the petty, vulgar, self-serving and mean-spirited character of the so called “interview” in which Harry and Meghan Markle participated with its egregious accusations of racism and bullying by unnamed members of the Royal Family. The contrast between the Sussex duo was especially pronounced in comparison by the grace exhibited by Kate, Duchess of Cambridge, confident, self-composed, with calm capability, apparently acting as a family peacemaker.

Yet the funeral was also the illustration of a fading epoch with its touching memories of the British Empire, the lament played by a pipe major from the Royal Regiment of Scotland, the Last Post by buglers from the Royal Marines, the Reveille by state trumpeters of the Household Cavalry. The ruling generation, including Philip at 99, the unusual mixture of German, Danish and a touch of Russian, forged in and after World War II is passing. Queen Elizabeth at 95 in April 2021 remains, but royalty has gone from Russia, Germany, Austria, Greece, Portugal, Italy.

The British Empire, which once ruled the waves, and on which the sun never set, was increased by conquest and by trading posts in Africa and Asia. By World War I it was the largest empire that has ever existed, on about a quarter   of the world’s surface and with over 20% of the world population. Winston Churchill in the House of Commons in November 1942 remarked, “I have not become the king’s first minister in order to preside over the liquidation of the British Empire.” But Churchill, like King Canute, could not turn back the tide, nor stop the inexorable decline of the Empire. Two main factors accounted for the decline; one was that wars bankrupted the UK ; the more pressing one was development of independence movements, partly because parts of the Empire contributed  troops and resources to the wars  and took an increasingly  independent view but mainly because of arguments for decolonization, calls for freedom  from alien rule, and for popular sovereignty of peoples as the basis of political community.

Limited self-government by colonies began in Canada in 1847 and then was extended to other colonies which gradually gained complete control over their own affairs. In 1907 they were granted the status of “dominion,” and then became part of the British Commonwealth of Nations.

Most of the decline of the Empire in the 20th century was peaceful with little or no organized   violence. What was crucial was the emergence of nationalism: in Africa 33 colonies became independent between 1957 and 1966.  By 1963 all of Africa, except Rhodesia, had achieved independence from UK. This ended the collaboration of indigenous elites, who were exposed to and accepted ideas and institutions of the West. British rule had been largely indirect with local autonomy, one of “association,” a relationship different   from the French concept of “assimilation.”

Today, little remains of the British Empire across the globe, mostly restricted to islands and a few other territories, Bermuda, Falklands Islands, Gibraltar, Cayman Islands, but at the same time 15 states besides the UK, still have the British monarch, now Queen Elizabeth, as head of state, a purely symbolic and personal position, with no political authority.

In any objective assessment, historical figures and the periods in which they lived should not be  judged by modern values or sensibility, though it is desirable to evaluate the dark side as well as the bright side of characters. For centuries the West has dominated history, the Enlightenment, the Renaissance, and the forces of modernity were key factors in producing the intellectual, technological, economic and political organizations, industrialization, that led the world. Other areas of the world are catching up, with non-Westerner accusing the West for colonization. It is one thing to deny that Western culture can have universal validity. It is quite another to attack the West as hypocritical and oppressive, particularly because of benefits obtained from the slave trade, which is tantamount to rejecting the vital contributions of Western culture.

The absurdity of this stance of cancel culture or wokery has been shown once again in April 2021. In 2021 there have been controversy over the anti-racism focus in the curriculum in three schools in New York City, Dalton, Brearley, Grace schools, all with very expensive tuition fees. The London secondary school Pimlico Academy was vandalized with graffiti accusing the school of racism. This stance appears as an anti-intellectual, illiberal attitude, and as an assertion that people should be judged by the color of their skin. The critics of the schools spoke of the harmful impact of antiracism instruction.

Even more fatuous is the launching by the Jane Austen House Museum of a BLM inspired historical interrogation of the celebrated novelist’s link to the slave trade and as part of Regency era colonialism, not because of her novels but because she drank tea, used sugar, and wore cotton clothes, all products brought to UK from colonies in Africa. Her father, George Austen, rector for a parish in Hampshire, was for a time a trustee for an Antigua sugar plantation. Although it is a truth universally acknowledged, without pride or prejudice, that Jane Austen was one of England’s great 19th century writers, not a colonialist, the curators of the Museum are planning a display, “Black Lives mattered to Jane Austen.”

Undeniably, the British Empire provided wealth for the metropolitan economy and had a strategic value in maintaining lines of communication for security and expansion.  However, because of its primacy in modernity, the British Empire was more than conquest, exploitation, and oppression.  It was, in spite of mistakes and injustices, the initiator of the process of modernization and of liberal imperialism, not a cruel or inhumane force. As historian Niall Ferguson wrote about the British Empire, “no organization has done more to impose Western norms of law, order, and governance around the world.” Its system of law, values, and morals , and intellectual leadership has influenced the world.

All this is denied by advocates of cancel culture and by concepts of post colonialism which  reject the universalisms associated  with Enlightenment thought, democracy, liberalism, objectivity ,  and which characterize all Enlightenment values as Eurocentric, and  categorize groups of people according to “essential” qualities.

The British monarchy is going through a period of turmoil and must adapt to present day post Brexit Britain with political unrest in Scotland and Northern Ireland. It is not as popular as in the past. Yet the funeral of Philip illustrated it was still a symbol of unity and continuity, proving a kind of national solidarity. Other royal dynasties have collapsed while the British monarchy has survived headed by the 95 year old, politically neutral Queen Elizabeth, the center of stability. The funeral, because of the pandemic, was necessarily austere but the future of the monarchy, whatever future changes are contemplated, is not. Philip, himself a complicated figure, symbolized the contributions the monarchy and the country has made to the world, in language, commerce, political representation, and notions of freedom.

Britain, with all its mistakes and injustices and inherited privilege, was in the vanguard of the narrative of human progress, not the embodiment of shame or racism. Prince Philip took part  in more than 22,000 solo royal engagements, and was a modernizer.  It is now up to Prince Charles, after his long apprenticeship for the role of king, to further that narrative. He will have to elucidate what it means to be “British” in a multi-ethnic society.