The Dreyfus Affair: A Moment of Human Conscience. 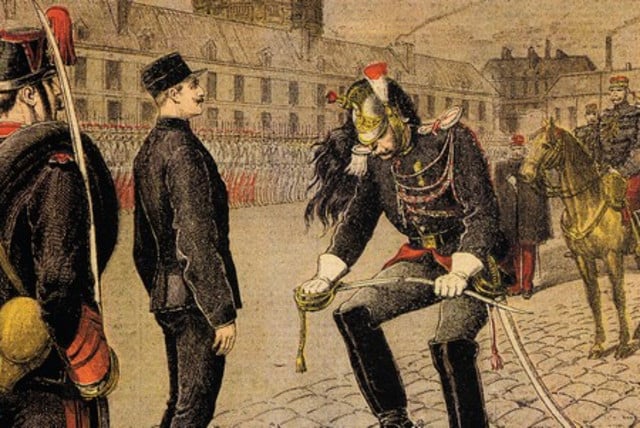 Alfred Dreyfus, the central figure in a political and legal affair that divided France, died in 1935, but he has reemerged as an object of polemical discussion as the result of ludicrous fulminations of French history by Eric Zemmour, ultra nationalist TV pundit and potential presidential candidate. Zemmour, whose parents were Algerian Jews, has risen spectacularly and become prominent in far right, anti-immigrant political circles, in October 2021 voiced two astonishing troubling assertions: the claim that Marshal Philippe Petain, head of the Vichy government, had protected French Jews during the Nazi occupation, while Jews were rounded up by French police to be deported to their death in Nazi camps;  and a statement  that the truth about  the innocence of Captain Alfred Dreyfus was murky and  we will never know whether the allegations against him were valid or were lies. This view of Dreyfus’s possible guilt had already been stated in an article in 1994 by a lawyer for the right-wing Jean Marie le Pen that the pardoning of Dreyfus was contrary to all known jurisprudence. Other far right commentators have suggested that the Dreyfus affair was orchestrated by a secret and occult power, and that it weakened France before World War I, an innuendo of Jewish conspiracy. At the heart of the Dreyfus affair, past and present, was antisemitism.

The Dreyfus affair began with the discovery by French security officials of a letter, found in the waste paper basket of a German military attaché at the German Embassy in Paris, offering to sell French military secrets to the Germans. Captain Dreyfus, the only Jew on the French general staff, was accused of the crime, arrested, and convicted by secret court martial in 1894, supposedly for spying on France and passing military secrets to Germany. He was stripped of his rank in a humiliating ceremony and sentenced to life imprisonment on Devil’s Island in French Guiana.

The country was divided and fractured on the issue, with French nationalists, prelates of the Catholic church, and some prominent intellectuals approving the conviction, among whom were virulent antisemites such as the writers Charles Maurras and Maurice Barres. On December 2, 1897, Maurras wrote to Barres that “the entire party of Dreyfus ought to be put in front of a firing squad.” Antisemitic hatred lasted until the end.  When Maurras after the War was convicted on January 27, 1945, for complicity with the enemy during the War and was sentenced to national degradation and life imprisonment in isolation, he shouted, “this is the revenge of Dreyfus”. Despite his appalling and abhorrent record, Maurras was much admired. T. S. Eliot saw Maurras as a “sort of Virgil who led us to the gates of the temple.” President George Pompidou praised him as a prophet of the modern world.

Dreyfus did not want to appear as a hero in his own drama and did not play any active public role in asserting his innocence, bur Emile Zola did, after the real villain in the Affair, Major Walsin-Esterhazy had been identified but in a military court found not guilty. As a result, journalist, and author Zola, at that time probably the most popular French writer, wrote an open letter, J’Accuse, of 4,000 words published in what is probably the most famous front page in the history of journalism. The letter electrified the country. L’Aurore distributed 300,000 copies of the day’s paper, as distinct from the usual 30,00. Zola had galvanized those believing that Dreyfus was innocent.

The letter, printed on January 13, 1898 in L’Aurore, whose publisher was George Clemenceau, was addressed to the president of the French Republic, Félix Faure, stating that there  was a spot of mud on his name because of “the abominable” Dreyfus affair, and the acquittal of Esterhazy, a great  blow to all truth, all justice.  Dreyfus, Zola declared, was wrongly convicted. He blamed the army leaders for covering up information and evidence, for miscarriage of justice, for judicial errors. France, he told the president, has “a stain on her cheek.” The truth was ignored and darkened. Yet, truth marches on and nothing will stop it. His duty was to speak. Zola castigated the French military leaders as spirits of social evil and wanted to hasten the explosion of truth and justice. He ended by a dare to bring him to criminal court and for investigation to take place in broad daylight.

Zola had deliberately taken advantage of the 1881 Press Law, according to which defamation could be published but was punishable for slander against military officials. Zola was arrested and tried for libel, sentenced on February 7, 1898, to a year in prison and removed from the Legion of Honor. When in July 1899 his appeal seemed certain to fail, he fled the country, living for a year in England.

By his letter, Zola manifested the influence of the press and of intellectuals challenging injustice.  He was right. Truth is on the march, and nothing shall stop it. Interestingly, the artist Camille Pissarro wrote to L’Aurore on January 18, 1898 that he wanted his name to be added   to “the protestation of the awful judgement of the country’s court martial.” Pissarro, himself the subject of antisemitic bile. agreed to be part of a committee to award a medal to Zola. The art world was divided, with Monet, Signac, Vallotin agreeing with Pissarro, while others, some former friends, Cezanne, Pierre-Auguste Renoir, Mary Cassatt, and above all Edgar Degas were opposed.  Among other protestors, Edward Grieg refused a musical invitation in France because of French injustice to Dreyfus.

In 1898 the French intelligence officer admitted he had forged documents to prove Dreyfus was guilty. None the less, Dreyfus was court-martialed again, and again found guilty.  He was offered and accepted a pardon, though there was nothing to pardon, by President Emile Loubet in 1899, was released from prison and lived in a state of house arrest. Finally, the conviction of Dreyfus was overturned by a military commission in 1906.  He died on July 12, 1935, aged 74.

Zola died on September 29, 1902 in his Paris apartment of carbon monoxide, probably caused by a badly ventilated chimney. The death may have been accidental, but is suspected of having been a murder by blocking the chimney. Zola is today buried in the Pantheon, after initial burial at Montmartre cemetery. At that event on October 5, 1902, the author Anatole France  spoke of Zola’s heroic honesty, his virtue.  His destiny and his heart gave him the fate of the greatest men. Zola deserves well of his country for not having lost faith in its ability to rule by law. Anatole France ended his eloquent tribute with a dazzling compliment: “he was a moment in the history of human conscience, “

Zola was transferred from the Montparnasse cemetery to the Pantheon on June 4, 1908. Dreyfus who was present at the ceremony was wounded by two shots fired by a nationalist journalist.

Every year Zola has been honored. In October 2021 he and Dreyfus have been bound together in a symbolic link of their destinies in the struggle for truth and to repair injustice.  It is an opportunity to reflect on fundamental issues, the correct functioning of the legal system, the virus and evils of antisemitism, the role of the media, and the role of intellectuals in democratic societies.

On October 26, 2021,  President Emmanuel Macron inaugurated a museum, the first of its  kind dedicated to  the Dreyfus affair, a collection and exhibition in the house of Emile Zola, in Medan, west suburb of Paris. Nothing, said Macron, could repair the humiliations and injustices that Dreyfus had suffered, but let us not aggravate them by leaving them  forgotten, aggravated, or repeated. The museum is part of the Zola  house devoted to preserving his memory and the crucial role he played in challenging the conviction of Dreyfus.

The Maison Zola-Musee Dreyfus was co-financed by Pierre Berge, the late partner of Yves Saint Laurent,  the  foundation for the memory of the Shoah, and antiracism campaigners some of whom called for Dreyfus to be posthumously promoted to the rank of general.  One of its sponsors was Elie Wiesel. The new museum will display a collection dedicated to the Dreyfus Affair, 500 documents, objects, antisemitic caricatures,  photographs, songs and posters.

The museum will naturally focus on the Dreyfus Affair and Zola’s action which was a turning point, but it will posit broader questions of tolerance, human rights, separation of religion and politics, secularism, and antisemitism. Truth will march on.