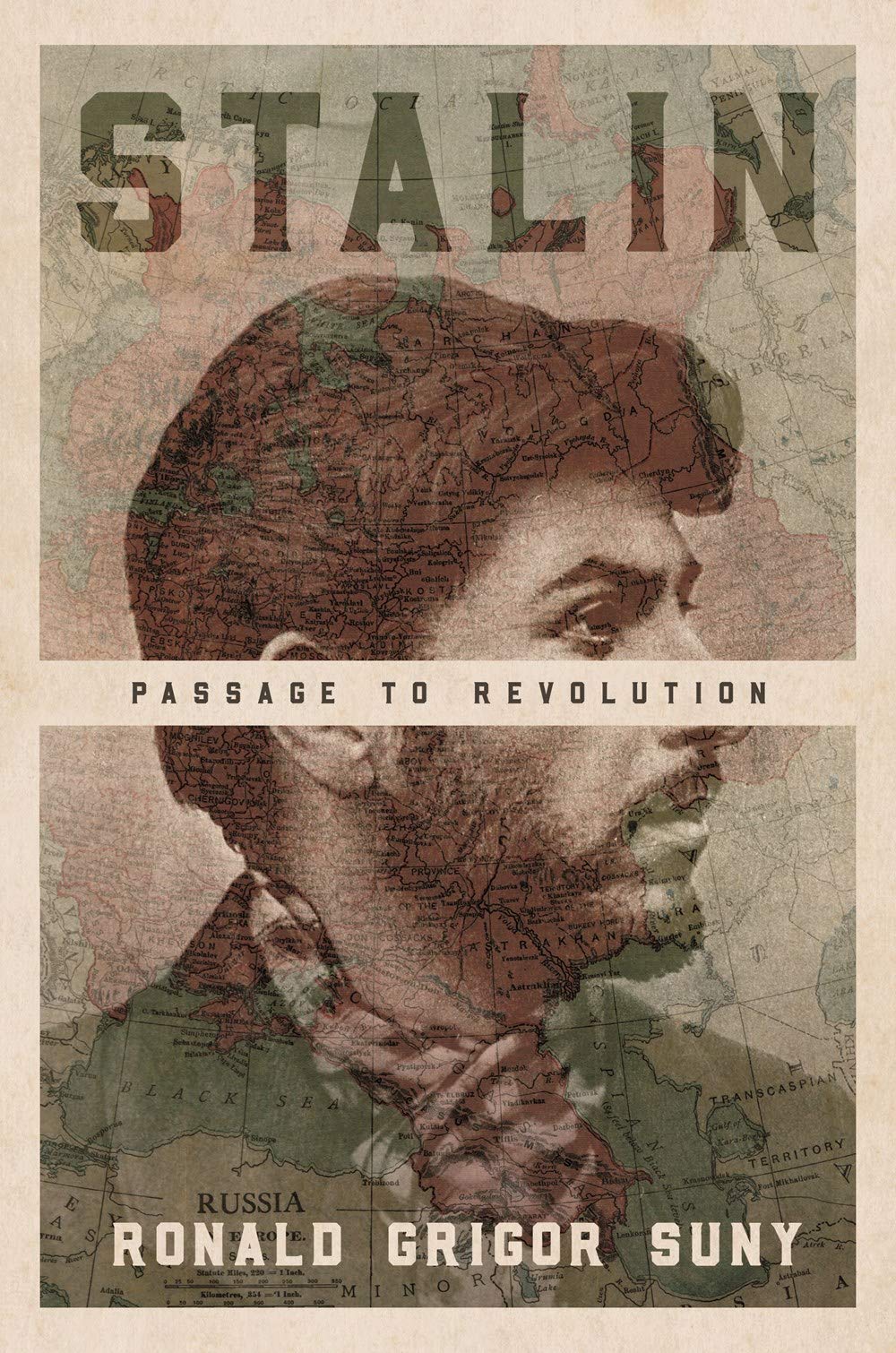 In a broadcast on October 1, 1939, Winston Churchill spoke of Russia as “a riddle, wrapped in a mystery, inside an enigma.” The same comment has been made about the individual who began life as Ioseb Jughashvili and evolved as Soso and Koba, into Joseph Stalin. In his new book, Stalin: Passage to Revolution (Princeton University Press) Ronald Grigor Suny, Professor at University of Michigan, unwraps the mystery, penetrates the character and proves a clear and elaborate analysis of the Russian leader as a young man and the evolution and the story of the transformation of a poor boy from the provincial Georgian town of  Gori, on the borderland of the Russian empire, to become the ruthless dictator, the most powerful man in the world.

Other writers have produced their version and interpretation of Stalin. Professor Suny warns in this first full explication of the early life of Stalin that human choices are not fixed one-dimensionally by context or institutions or environment. Explanation of Stalin should take account of complexity, skepticism, uncertainty, accident, and chance. Stalin is exceptional because of what he became. The mystery is why a revolutionary supposedly committed to human emancipation and an opponent of injustice ended up as the epitome of dictatorship and terror.

In this 800 page book, Suny, using an abundance of newly available archival material, though there was no secret diary or introspective documents, provides an extraordinary telling, detailed account, well written and engrossing, of the obscure and multiple layers of experience, in Stalin’s early life; church school, seminary, outlaw, exile, prison, attraction to Marxism. In addition, tis book places Stalin in the context, political, economic and intellectual,  in which he lived in Georgia and Russia. Moreover, Suny provides us with a fresh and elaborate reading of Russian and Georgian revolutionary movements, guiding readers through the complexities of the heated revolutionary, Bolshevik and Menshevik party disputes over their doctrine and practice, of the personnel and machinations of the socialist groups, after they split in 1903, the nature and function of the party, and questions such as whether the socialist parties should engage in parliamentary election, the use of violence, and tactics to achieve a successful revolution. In views of the sad experience of dissenters in the Soviet Union it is fascinating to recall the heated open, often fractious, hair-splitting debates and controversies among the strong-willed revolutionary activists before 1918. Even Vladimir Lenin never had complete domination over his Bolshevik faction of the Russian Social Democratic Labor Party.

Stalin is said to have been born in Gori, Georgia, on December 9, 1879, though Suny indicates there is some dispute about the actual date, the son of a cobbler who became a craftsman, a weak man who was often drunk, a brute who beat him, and a strong, religious obstinate mother who promoted her son nicknamed Soso, and wanted him to be a Greek Orthodox priest. Stalin conracted smallpox infection which left his face scarred for life, and also suffered an injury that shortened his left arm. At the church school in Gori, though treated as an inferior, he took part in activities, was an inveterate reader, a poet, and showed musical talent. He had a circle of friends but his relationship with them, as always throughout his life, mostly depended on their usefulness for him. He learned Russian though he always spoke with a Georgian accent.  He was at the time a devoted believer in Orthodoxy, and a Georgian nationalist.

At the religious seminary in Tiflis to which he went in 1894 he was a competitive figure, a wrestler who loved fighting and singing, a romantic and patriot poet. He continued his study of Russian, began reading sociology and political economy including Engels and Karl Kautsky, illegal books, and attended secret workers’ meetings. He attempted to balance attachment to Georgian culture and official Russian culture. He spoke of the proletarian virtues of courage and steadfastness, using the plain language of ordinary people. He always wore simple clothes. He was expelled from the seminary in May 1899, but it is not clear if it was because of reading Marxist propaganda. Though educated for the priesthood he had no interest in the church. He had rejected first the religion of his mother and teachers and then the nationalism of his Georgian compatriots, shifting allegiance from concepts of honor and respect in Georgia to the arbitrary power of Russia.

Without a school diploma, he worked for a while as a meteorologist, but mostly taught in Baku and St. Petersburg in workers circles and organized mass meetings of workers, helped organize demonstrations on May Day 1901, and a strike in Batumi. He wrote a steady stream of articles for radical papers, and became “a journeyman for the revolution.” Stalin reinvented himself. By the time he was 21 he was a professional revolutionary, an advocate of partisan actions, terrorism, and expropriation. Soso became Koba, a name taken from the protagonist of a novella by a Georgian writer, Alexander Qazbege.

Koba had no permanent home, lived outside the law, depended for help on his circle of associates, and became a self-styled professional revolutionary, a semi- intellectual of proletarian origin who lived as a bohemian.  In his party underground activity with workers  he was polemical, speaking in plain language, endlessly repeating simple ideas. However, from early years he was hostile to or would deceive and act callously towards those he considered political enemies, even boyhood friends like Lev Kamenev (Leo Rozenfeld) or Grigol Orjonikidze  or Stepan Shuhumian,  or those of whom he was jealous, such as Georgi Plekhanov founder of the SD movement in Russia or Noe Zhordania, important revolutionary in Georgia. But Koba did adhere to Vladimir Lenin, a “mountain eagle.” He had strong opinions, but he was dogmatic, unwilling to compromise, an intriguer displaying an exaggerated sense of his own importance. Even in early years Koba displayed those qualities that led Lenin in his Testament to speak of Stalin’s rude manners, excessive power, and ambition. Yet Stalin was appointed to the Bolshevik Central Committee.

In his underground years Koba was named in police reports, starting in November 1901, as an important figure in the local anti-government movement. He was always ambitious, self-confident, even arrogant, contemptuous of intellectuals, dogmatic, and an embittered young man, always resentful. He was an activist, helping   secret disciplined groups and armed bands, organizing strikes in the port city of  Batumi. He was accused of being involved in a bank robbery in Tiflis on June 26, 1907, though he tried to distance himself from the robbery. Suny suggests doubt that Koba was responsible. In the 1905 revolution he played a minimal role, but  he organized and armed Bolshevik militias across Georgia and waged guerrilla  attacks on the Cossacks.  Koba was captured by the czarist police and sentenced in November 1903 to prison in Siberia from which he escaped, and again sentenced to Siberia, 1913- 17. Suny argues he was not an agent of Okhrana, the secret police in spite of allegations that he was able to escape because he was an agent.

In his evolution to Marxism, and practical activity, starting from his membership in  November  1901 of the Tiflis committee of the Russian Social Democratic party, Koba who sided with the Bolshevik  wing of the SD party was concerned with a number of  issues. One was the nature of the revolutionary party, whether it should be a “cadre” party with disciplined leaders, or whether it should attempt to infuse “socialist consciousness” among workers and their organizations, ally with them, and not simply observe the spontaneous labor movement from the outside. Stalin’s attitude was that the labor movement without socialism was a “ship without a compass.” Equally important, he was always vocal about the need for party unity.

On this party issue, Koba was influenced by Lenin’s 1902 work, What is to be done, which called for a highly centralized party of professional revolutionaries. In the Leninist-Stalinist view, the proletariat on its own can only achieve “trade union consciousness”, and thus a party must imbue them with revolutionary consciousness and be its vanguard. This position was upheld by   Koba who was no orator but a good organizer, and also an intriguer who repeated his ideas with clarity and simplicity. Koba understood, before Joseph Goebbels, the value of incessant repetition of simple themes and words.

From early years Stalin was involved in the question of nationality and in the intermural wars between Georgian and Russian Marxists.  Born in the borderland of the empire, he  believed that Russian culture and society was more modern and superior than cultures on the periphery such as that of Georgia. It was at the 1906 Fourth Congress of the RSDW party in Stockholm, that he first spoke on the nationality issue which would be a major concern. In 1913 he published the short article Marxism and the Nationality Question, his only significant contribution to Marxist theory,  which established his reputation as an expert on the subject. After the 1917 October Revolution,  Stalin was appointed Commissar of Nationality Affairs.

Another controversial issue, which became a dividing line among revolutionaries was the

question of whether Russia should be the country that blazed the trail to socialism and would lead Europe and the world to become socialist, or whether Russia should concentrate on building socialism in one country and not wait for a permanent revolution. Stalin was clear. It was possible to strive for and have a socialist society in a separate country For him the victory of socialism was possible in individual countries.

The question remains open. Was Stalin the dictator a continuation of Lenin and his policies, or a perversion of them? Professor Suny helps provide an answer through his outstanding presentation of the early life of this tyrant. He shows the man Stalin, formed by 1917, disciplined, tough, violent, a man who hid his ambition, who governed his emotions, a dogmatist who had no doubts. If he had any empathy for others, it had been replaced by an instrumental cruelty.

PrevMPs exit inquiry in protest at student wearing muslim veil in French parliament building
In Bahrain, Opposition to Normalization Unsurprisingly Greater Than In the UAENext