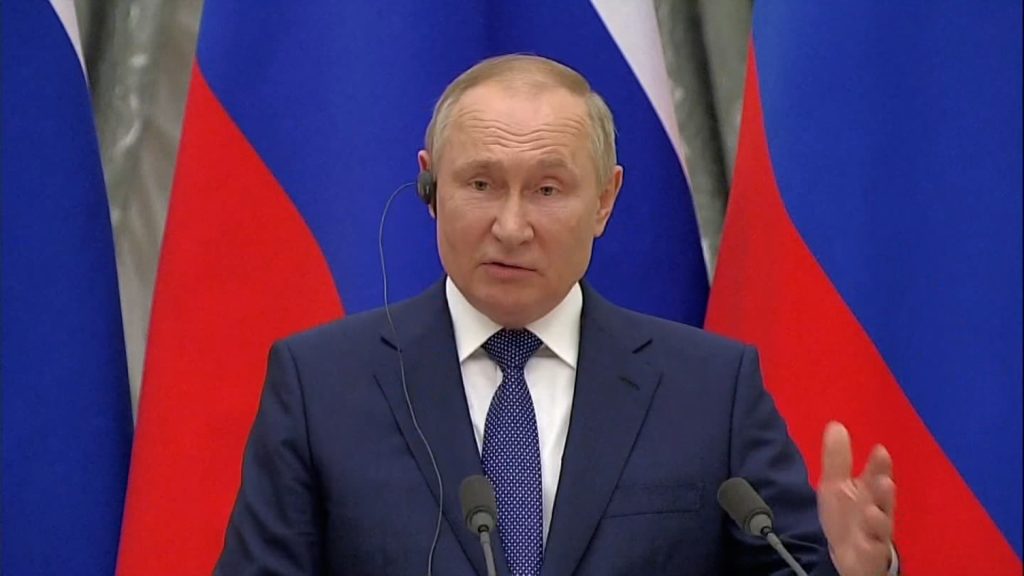 Vladimir Putin is in grave danger of a complete flame-out.

Following the bloodless Western victory in the Cold War and the collapse of international communism and the disintegration of the Soviet Union, Putin emerged from the infighting that surged through the Kremlin in the aftermath of the crumbling of the Soviet Union. As he took over control of the truncated Russian state, he faced a clear choice: He could attempt to give Russia a soft landing in its descent from co-superpower of the world with the United States to a prominent place in the second tier of the world’s most powerful countries, or he could decline to recognize the legitimacy of the former Soviet Republics that had seceded and set out to rebuild Russia, attempting to retrace the steps of Peter the Great and Joseph Stalin.

In choosing the second, the reconstruction of greater Russia and the Soviet Union, he has produced the worst failure in modern times of the first option: the descent from the top to the next rank.

The supreme example of an elegant demotion from the first to the second level of world powers was Churchillian and Thatcherite Britain: a Gloriana to celebrate the British Empire’s immense services to Allied victory in the World Wars and the more or less voluntary handing over of independence to scores of former colonies including the six countries of the immense British Indian Empire.

Churchill the magnificent romantic, Elizabeth II the practical builder of the Commonwealth, and Thatcher by being such an invigorating, supportive, and influential ally of the United States and asserting the prerogatives of the British Empire in the Falkland Islands, enabled Britain to climb down with unimpaired dignity and even a note of triumphalism. Putin, in seeking to reverse history, has produced a terrible fiasco, Russia’s worst disaster since the war with Japan in 1905.

Putin seemed for a time to be doing a capable job of establishing Russia in the front rank of the second tier of the world’s great powers, like all other countries in the world, behind the United States. But there was continuous ambiguity about what was known as the “near abroad,” the other republics apart from Russia that seceded from the rule of the Kremlin: Ukraine, Belarus, Moldova, and the three Baltic, three Caucasus, and five Asian republics. These seceded states had a total population of approximately 150 million, about the same as Russia itself, and they had gradually been acquired by Russia by the efforts of the more ambitious czars and by Stalin’s seizure of the Baltic states under the Nazi-Soviet Pact of 1939, which the Western allies didn’t seriously attempt to persuade Stalin to disgorge, given the immense sacrifices and contribution the USSR made on the Eastern front in World War II.

The West invited Russia to join the G-7 making it the G-8, and there was even some discussion of Russia joining NATO. President George H.W. Bush had famously advised the parliament of Ukraine to consider the merits of continuing in association with Russia. This was reviled as the “Chicken Kiev speech” of August 1991, but by the time of George W. Bush, the United States was leaning toward inviting Ukraine into NATO.

Putin had publicly mused about the tragedy of the breakup of the old Russia and Soviet Union and felt that to be unjust in itself and a factor of great destabilization in the Eurasian landmass. He seized two provinces from Georgia in 2008 when that country was also making noises about joining NATO, and Putin was able to invoke the old Hitler complaint of the mistreatment of, in this case, Russian minorities in the former republics.

Where Western placation of the Kremlin ceased and Putin moved toward an attempted outright reassertion of some of Russia’s credentials to be considered still a rival to the United States was when Russia intervened in Ukrainian elections to promote the elevation as president of Viktor Yanukovych in 2010, a result that rejected the previous increasing intimacy of Ukraine with the European Union under pro-Western president Viktor Yushchenko. The West intervened and infiltrated Ukraine and helped to incite a political upheaval that defeated Yanukovych and brought in Petro Poroshenko. This was the effective cause for Putin’s seizure of Crimea in 2014 and Russia’s resulting expulsion from the G-8, which reverted to the G-7.

All of the major powers had joined in guaranteeing Ukraine’s independence and its borders when it surrendered the nuclear weapons that it, along with Belarus and Kazakhstan, had inherited from the Soviet Union, but the guarantees of the signatory powers including Russia and the United States were conspicuously worthless.

From this point onward, the die was cast, and Putin was aiming to recover the power and position of the Soviet Union. He stopped seeking better relations with the West, and began paying court to Beijing. There’s an element of surmise in this, but it seems likely that he was motivated to make his move on Ukraine after the horrifying fiasco of the American desertion of Afghanistan, leaving thousands of their own operatives and billions of dollars of military hardware in the hands of their Taliban enemy, while putting great and completely avoidable strain on the Western alliance.

Putin’s assault on Ukraine was bizarre: American aerial reconnaissance made public to the whole world the buildup of the Russian supply train and large numbers of tanks and armored personnel carriers. With this daily spectacle, I was one of those commentators who wrote that this was such an insane method of preparing for war, and, as the visible Russian forces were only about 150,000 combat trigger-pullers with scores of thousands of support people, Putin could not possibly be serious about attempting to occupy a country of over 40 million people with such an inadequate attack force.

We now know that his military commanders assumed that their former faithful supporters in the Yanukovych government could stage a coup in Kyiv delivering the capital of Ukraine over to the Russian invader within a few days, and that resistance would fade away as quickly in the balance of the country as it did in Crimea in 2014. Russian intelligence should have known that a number of NATO countries had been diligently training up a full army of 200,000 Ukrainians and a well-trained militia reserve of another 300,000, and they might have anticipated that NATO would heavily assist Ukraine with arms and munitions.

The Americans probably deserve some credit for only slowly ratcheting up the level and sophistication of their support for the Zelinskyy government in Ukraine, and avoiding sudden drastic escalation. Russia has now reached the extremity of buying weapons from North Korea. If Putin escalates his attack on the Ukrainian civil population, and particularly if he employs small nuclear weapons, it will be an invitation to a drastic escalation of the air and artillery war against Russia. And the current Ukrainian president, Volodymyr Zelinskyy, cannot be allowed to drag the West into a reenactment of the Crimean war of 165 years ago (without a light brigade or Tennyson to describe it).

Putin can have a referendum in the Russian-speaking areas of Ukraine, including Crimea. But that’s all he will have to show for this clumsy and failed effort to revive Russian glory. The invasion of Ukraine is a failure, and Russia’s attempt to regain the first rank of world powers dies with it. The best Putin or any Russian leader can do now is to liquidate this war, hope that it wins some referendums in the Georgian and Ukrainian border states, and replace the present program of almost weekly murders of oligarchs with a serious effort to give Russia something it has not had one day of in its entire history: good government.