The Irish Model for Peace in the Middle East 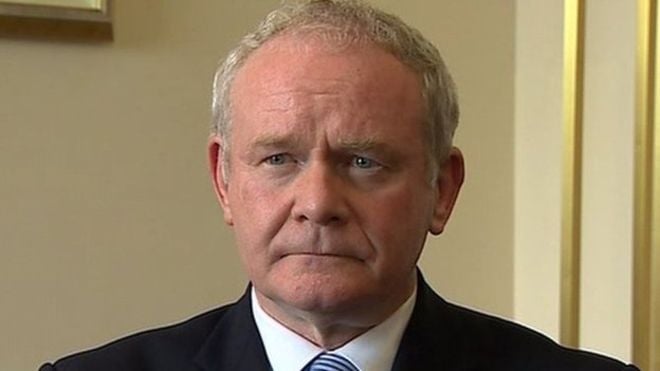 On March 21, 2017 Martin McGuinness, the former chief of staff of the Irish Republican Army and street fighter turned peacemaker and politician, died of amyloidosis, a rare genetic disease, at the age of 66, a few months after he had resigned from his position as Deputy First Minister of Northern Ireland. His story is remarkable and is a commendable object lesson for other political figures reluctant to make peace with their opponents, especially Mahmoud Abbas, long term President of the Palestinian Authority.

McGuinness never hid the fact that he had been a senior figure in the Irish republican movement, was proud of it, and justified the armed struggle of his early years He had joined the Provisional Ira faction, more extreme and dangerous as a ruthless terror group than the main Ira movement, in Derry (Londonderry), and became deputy commander at the age of 21.

During his involvement in the IRA he witnessed, if not always responsible for, a considerable number of cruelties: the killing of 3,500 people during the Troubles, the dispute between Catholics and Protestants in Northern Ireland; the murder of Lord Mountbattan in August 1979 in Sligo; the murder on the same day of 18 British soldiers at Warrenpoint, County Down; the attempt to assassinate Prime Minister Margaret Thatcher at the Conservative Party Conference in Brighton on October 12, 1984 when five were killed and 34 injured; and bombs in Central London in the 1990s.

Though McGuinness, as a passionate republican, remained opposed to British rule in Northern Ireland until the end of his life and believed in the cause of unification of Ireland, he moved from being a paramilitary figure to a politician renouncing violence. He gave up bullets for ballots, Armalite for the ballot box. Ending up his role as a hardline Provisional IRA leader, in the 1990s he held secret back channel talks with British security services that led to a cease fire by the Provisional IRA.

He helped the electoral rise of the Sinn Fein party. He engaged in electoral and managerial politics, becoming Minister of Education (1999-2002), where he showed an interest in primary schools, and then in 2007 became Deputy First Minister, a post he held for 10 years in the power-sharing government. He became a member, for the constituency of mid-Ulster, of the UK House of Commons in Westminster but never took his seat, though he did accept an office in the Parliament building.

Two points are particularly interesting about the latter part of his career.  After his entry into peaceful politics and government, McGuinness, a Church going Catholic, a non-smoker and non-drinker, developed a genuine warm friendship with First Minister Rev. Ian Paisley, leader of the Protestant Democratic Unionist Party, his zealous former deadly rival and enemy. They were frequently photographed together laughing, and became knick-named, the Chuckle Brothers.

An even more meaningful event and gesture was a handshake at the historic meeting at a charity event in Belfast on June 27, 2012 with Queen Elizabeth. The handshake between them was, as he said, a very pointed, deliberate and symbolic way offering the hand of friendship. The two different personalities subsequently met on a number of occasions, including one in June 2016 at Hillsborough Castle where the Queen unveiled the portrait of herself.

McGuinness was Sinn Fein’s chief negotiator, a more affable figure, more politically realistic and more understanding of the other side than Gerry Adams his colleague, alter ego and close friend since 1972, during the peace process in Northern Ireland that led to the historic breakthrough in Belfast of Good Friday on April 10, 1998, the agreement that set up a devolved system of government, based on peace between Catholics and Protestants.

President Donald Trump has not yet formulated any definite policy on the Middle East especially on the Israeli-Palestinian issue, and a visit is expected by Palestinian leader Mahmoud Abbas  to the White House in mid-April 2017. In his few remarks on the issue President Trump did refer to Abbas as a strategic partner in a peace deal that must be negotiated directly between Israel and the Palestinians.

Unfortunately, since Abbas does not behave and gives no indication of behaving in a similar fashion to McGuinness, this appears unlikely. Abba, in a TV statement as recently as March 12, 2017 in extravagant language, said that “the international community is becoming more and more convinced that the occupation of the Palestinian state by Israel is the reason for all the disasters from which the region and the world is suffering.” His official line, and that of the PLO, stated on October28, 2015 is that Israel has “occupied our land for 67 years,” which translates into 1948 the year of the establishment of Israel. President Trump would not approve of the opinion of Abbas that “Jews are causing devastating corruption throughout the land.”

When they meet in April 2017 Trump should inform Abbas of the words of McGuinness: “The lesson from the conflict in Northern Ireland is the same for everywhere else. There are no military solutions, dialogue and diplomacy are the only guarantee of lasting peace.” Abbas should be informed by Trump that the really important approach is for people of different political persuasions to work together in a positive and constructive fashion. McGuinness has set a standard to follow.