The Love Song of T.S. Eliot 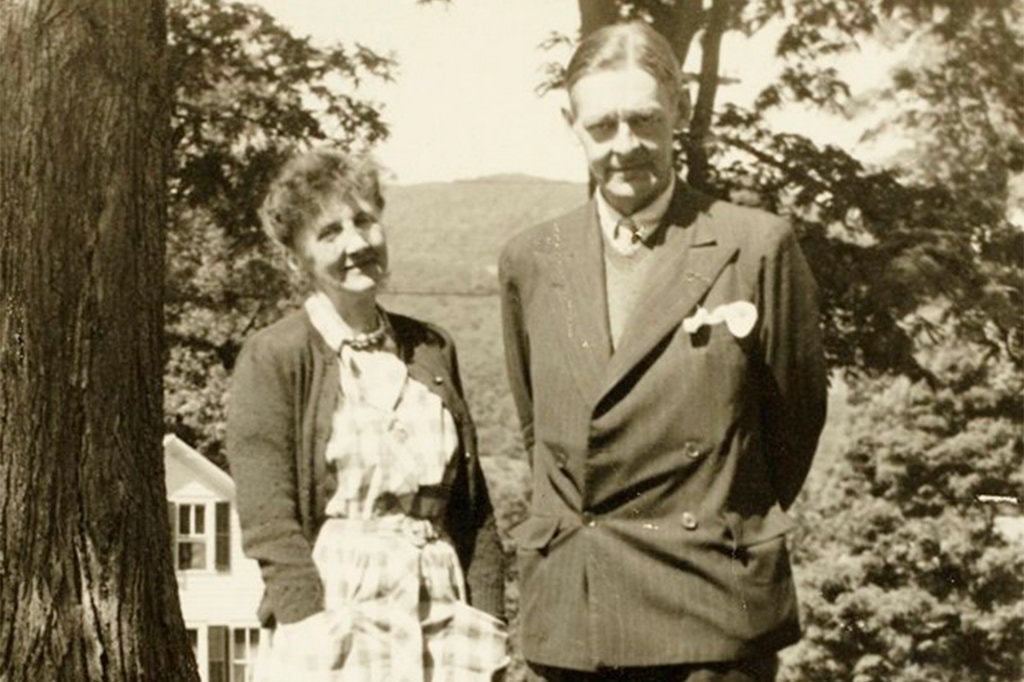 “I never at any time had sexual relations with (that woman) Emily Hale.”  The words seem familiar but they were uttered not by an accused U.S. president in January 1998 but by Thomas Stearns Eliot, poet, playwright, essayist, publishing editor, one of the important poets of the 20th century, who got the Nobel Prize for Literature in 1948, to his executor on November 25, 1960. The sentence appears in public as a result of an important literary event, the release by Princeton University Library on January 2, 2020 of 1,131 letters written by Eliot to a former lady friend, once regarded as his “muse,” Emily Hale between 1930 and 1956.

Eliot died in 1965 and Hale in 1969, so the letters appear now because of the arrangement by Hale who had given them to Princeton that the letters would be publicly available 50 years after their deaths. This is a one-sided collection. The letters of Hale to Eliot were destroyed at his request.

It remains to be seen if the Princeton release is the literary event of the decade, but it will be one of incalculable significance for scholars of Eliot in particular and of modern literature in general. The letters may reveal not only the true relationship between TSE and Hale, but also cast light on the true nature of the man, which has often been disguised, his literary output, often opaque, and of other issues which have hitherto been obscure.

The action of Eliot, annoyed when Hale donated his letters to Princeton, is itself a revealing insight into his character. On hearing of the donation, he took a pre-emptive strike to protect himself by writing to his executor on November 25, 1960 a self-revealing picture of the background of the correspondence and his relationship with Hale and others. It was probably an attempt to lessen the import of the Princeton letters. He said he wanted to be “as brief as I can,” but he wrote a 1,278 word document. He wanted this statement to be made public as soon as Princeton made public the letters to Hale.

TSE, born in St. Louis, in 1888, had studied at Harvard, obtained a BA and MA, was Professor of Poetry there 1932-33, and was awarded an honorary degree 1947. Hale, born in Boston in 1891, was educated at Smith College, and became Professor of Drama at various colleges. They first met in 1912, and he fell in love with her when he was in the Graduate School at Harvard, before he left for Germany and England where he remained for the rest of his life.  In 1914 he told Hale he was in love with her.

Eliot has been both the subject of controversy and of puzzlement. He was original but esoteric, authentic but baffling. In a letter written on September 14, 1936, Isaiah Berlin wrote about a new game he and Stephen Spender were playing: answering questions in the manner of T.S. Eliot. You answer very slowly, carefully, and deliberately, avoiding no obvious platitudes, but embellishing them by clothing them with carefully placed words. Above all, the tempo must be kept very slow and even, and nothing ordinary left unspoken. Playing this game, Berlin was conscious of a deeper insight into Eliot’s character. The great test is saying “Yes” in a “properly melancholy manner, with a sincere and pensive inflexion.”

Eliot’s personality and thoughts and the relationship between them has always been the subject of controversy, as has the merit of his poetry and his conservative political and religious views. Eliot may not have been the 20th century Anglo-American version of Tartuffe who ostensibly purports to be virtuous  but he also did not resemble Archangel Gabriel. Questions can asked.  Did Eliot measure out his own life with coffee spoons?  Did he resemble the bored character in The Love Story of J. Alfred Prufrock, his first professionally published poem in 1915, that there “will be time to prepare a face to meet the faces that you meet?” His remark when receiving the Nobel Prize that he received it “not on his own merits but as a symbol for a time of the significance of poetry” seems disingenuous.

One can admit he was a great poet, even though the poetry is often opaque and does not yield easy understanding and is not easy to decipher. His best known work, The Waste Land, a poem full of fragments, quotations from Homer to the present can be regarded as a central work of modernist poetry, but it is allusive and for many readers indecipherable because of its allusions and its shift between different speakers and scenes without notice given.

Irrespective of disagreement over the quality of his oeuvre, Eliot was also a flawed human being. Some of his positions and statements are disturbing. He praised Mussolini as a “wise and astute statesman;” he talked to Ezra Pound about “wops;” he spoke of the “feeble or incomplete sexuality,” of gays. As a director at the publishing house of Faber and Faber he wrote an astonishing letter on July 3, 1944 to George Orwell rejecting the publication of Orwell’s Animal Farm, because “we have no conviction that this is the right point of view from which to criticize the political situation.” Eliot offered some praise of Orwell’s narrative that kept one’s interest, but held that Orwell’s positive point of view in the book, which he took was generally Trotskyite “was not convincing.” Orwell later fairly commented that keeping topics out of print was not because of fear of prosecution, but fear of public opinion. In indirect rebuke of Eliot, Orwell held that intellectual cowardice is the worst enemy a writer has to face.

The most controversial aspect of Eliot’s output, fictional and nonfictional, were remarks with outright or overtones of antisemitism and racism. The initial problem in assessing him is that although his poetry can be admired, antisemitism, as Anthony Julius said in his important book, TSE: Antisemitism and Literary Form, was important in his writing, an antisemitism mired in ugliness and loathing. It reaches out, as Julius said, as a clear signal to the reader. Some may argue that the unpleasant antisemitic passages in his poetry, especially in Burbank with a Baedeker: Bleistein with a Cigar, ( the rats are underneath the poles. The Jew is underneath the lot,)  and in Gerontion, (squalid, squat Jews) are attributable to the characters in the poems rather than to TSE personally.

Yet, this is it ignore some statements other than in poetry. The most notorious passage stems from a lecture in 1933 at the University of Virginia, later incorporated in the book After Strange Gods: “What is more important in unity of religious background, and race and religion combine to make any large number of free-thinking Jews undesirable.” Moreover, in 1948 , after Auschwitz, he allowed his antisemitic poems to be published in a selected edition.

Less controversial has been the impact of other works by Eliot. His whimsical poetry of 1939, Old Possum’s  Book of Practical Cats, was adapted by Andrew Lloyd Webber to become the musical Cats, and later a film. It is ironic if Eliot is most remembered as the author of playful poems about cats. Less amusing than this musical but more significant and useful for understanding Eliot’s personality and relationship with women are the letters to Hale now available.

Perhaps the whole truth will emerge from the Princeton letters starting with a true account of the extraordinary circumstances that Eliot in spite of his belief that he was in love with Hale, suddenly married Vivienne Haigh-Wood. Eliot, in partial and elliptical fashion, explained he was very Immature for his age, very timid, very inexperienced, and had doubts about his choice of a profession at that time, a university teacher of philosophy, because he yearned to write poetry. His meeting with Ezra Pound who was enthusiastic about Eliot’s poems, changed his life. He stayed in England, wrote verse, and wanted a flirtation or mild affair with Vivienne, but was too “shy and unpracticed” to have this.

Instead, he married Vivienne that led to an unhappy relations, but he, who had converted to Anglicanism, refused to get a divorce for religious reasons from Vivienne who was a Unitarian.

Inevitably they separated, but his wife went into a mental home and died there in 1947. For Eliot, life and fiction appeared to merge in a way that may surprise literary critics. For Eliot the marriage “brought a state of mind out of which came The Waste Land.” as well as saving him from marrying Emily Hale. He explained, “She, Hale,would have killed the poet in me. Vivienne nearly was the death of me, but she kept the poet alive.” Otherwise, Eliot would have been a mediocre teacher of philosophy.

Eliot did see Hale from time to time, every summer in later years when she came to England. However, Eliot never married Hale, and has a mixed, troubled and unconsummated relationship with her, the exact nature of which may emerge from the Princeton letters which may also shed light on Eliot’s life and published output.

Was Eliot deliberately or inadvertently deceitful? In November 1930 TAE wrote to Hale, “you have made me perfectly happy…though it is the kind of happiness which is identical with my deepest loss and sorrow, it is a kind of supernatural ecstasy.” However, his note to his executor declares that “my love (for Hale) was the love of a ghost for a ghost…the letters to her were of a hallucinated man, a man vainly trying to pretend to himself he was the same man he had been in 1914. He said he realized, after the death of Vivienne in 1947, that he had been in love only with a memory, with the memory of having been in love with Hale in his youth. He was caustic about Hale. She had a lack of respect for his strong views on religion and divorce, and she liked “my reputation rather than my work.” She was not interested in his poetry, and was guilty of insensitivity and bad taste.

It is enticing to contemplate whether the Princeton letters show kinder and warmer feeling by Eliot towards Hale, and to both the literary and the real world. In particular, they may enlighten literary critics on questions such as whether the bleak world of The Waste Land was influenced by the unpleasant years with Vivienne, or whether the main figure in his play The Family Reunion is troubled by some version of Eliot’s transgression in his past.

T.S. Eliot ends the document of November 1960 to his executor with the words, “May we all rest in peace.”  Will examination of the Princeton letters end in the same way?