The Mental Health of Vladimir Putin 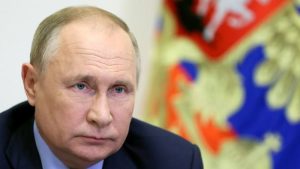 O let me be not mad, not mad, sweet heaven, keep me in temper, I would not be mad….the tempest in my mind doth from my senses take all feeling.

Throughout history, political leaders and writers have acted in strange fashion, with symptoms of neurosis, trauma, anxiety, imbalance of humors, perhaps divinely inspired or possessed by demons, and may lead to madness which takes many forms. The list is long of those exhibiting some indication of insanity.  There is the strange case of the philosopher Fredrich Nietzsche who in 1889 embraced a horse in the town square in Turin.  Nebuchadnezzar, king of Babylon 604-562, BC, made no secret of his ambition to conquer the world, and saw himself as a deity as well as a superpower. Caligula, Emperor of Rome, attempted to appoint his horse to the office of Consul.  Ivan the Terrible expanded the territory of Russia, created the secret police, and murdered his own son. Adolf Hitler and Joseph Stalin vie for leading personification of hatred, evil, and madness.

Russia this week may remember that madness since it is the anniversary of a speech denouncing a regime of suspicion, fear, and terror.  On February 25, 1956, Nikita Khrushchev, leader of the Soviet Union, delivered a speech at the 20th Congress of the Communist Party denouncing his predecessor Joseph Stalin as a brutal despot. He revealed the cruelties of the regime, the trials of members of the Politburo, the assassination of Kirov in 1934, and the execution of political rivals for that assassination though innocent of the crime.   Khrushchev indicated that in 1937-1938, 98 of the 139 members of the Central Committee of the party were killed on Stalin’s orders.

Madness has often been depicted in fiction. James Bond has confronted Blofeld, Goldfinger, Specter, and other madmen, equipped with a white cat and pool of piranhas, seeking the destruction of the world. Perhaps the most well-known and entertaining presentation of derangement is Don Quixote, seeking adventures and attempting to perform deeds of heroism, mistaking a field of windmills for giants, and attacking them, and battling a herd of sheep with an aim to exemplify the idea of chivalry. But this middle-aged protagonist mistakes people and places, confusing real and imaginary in his illustration of former glory, inventing problems where they do not exist and unilaterally challenging an innocent party.

The parallel of the lovable Don with the unlovable president of Russia is clear. Vladimir Putin, KGB agent for 16 years, ambitious, ruthless, and vain, is dramatically illustrating questionable behavior by his desire to obliterate an entire country and people, an objective similar to that of Nazi Germany. Western political leaders may have misread Putin, a person who appeared on the political scene in 1999, always well dressed in suits with expensive labels, Kiton, Brioni, musically talented, proud of displaying physical strength, and with an expensive Black Sea estate.

Because of his previous limited military interventions, the West underestimated his ambition and willingness to use greater force and naked aggression to obtain his goals.  His unprovoked war on Ukraine leaves no room for miscalculation, about his objectives and the ideology and emotions that drive him. He is an imperialist, backed by violence and toxic aggression, threatening those nations he considers hindering Russia’s actions. The question is whether Putin is completely sane.

“We are not dealing with a sane person” said Mikhail Khodorkovsky, former Russian oil tycoon, and that Putin had gone mad ordering the invasion of Ukraine.  Khodorkovsky, once believed to be the wealthiest man in Russia, had spent ten years in prison, 2003- 2013, after a show trial, before fleeing to London.  He remarked, Putin wants to make Russia great again, and wants the future to remember him as a great ruler of Russia. Putin may see himself as the reincarnation of Vlad the Great, ruler of Kviv who converted ancient Rus in 988.

This view of mental problems is also suggested in different ways by both politicians and medical authorities. One assertion is by the British Defense minister, Ben Wallace, who warned that Putin was not in his right mind, and what Putin is doing is deeply irrational.   That accusation of    irrationality may be justified in view of Putin’s unprovoked aggression against a sovereign nation, his fantasy of conspiracies, accusations of Ukraine planning genocide and seeking nuclear weapons and his absurd accounts of history. Whether Putin intends to seize the whole of Ukraine or to limit his control to Eastern Ukraine and the capital is unclear, but he has displayed himself as an imperialist, even colonialist and racist, with fabricated stories of his de-Nazification of Ukraine, and caricaturing its leader as a terrorist.

These false charges are particularly meaningful for four reasons. One is that Zelensky is Jewish; and his grandfather was a Soviet officer in World War II.  A second is that Putin speaks of one people, Ukrainians and Russians, “one single whole,” akin to Nazi emphasis on “ein volk”. In fact, Zelensky is a native Russian speaker who grew up in the Russified southeast region of Ukraine, and who won 72 per cent of the vote in the presidential election of April 2019. Once a comic actor with no experience of politics, Zelensky now 44, has rapidly matured to lead the fight for his country, displaying striking inspiriting rhetoric and personal bravery, and dignified courage, even symbolically appearing in public in olive green military style T shirt.

Zelensky, in a speech in Israel on December 14, 2021 was prophetic, “we know what it’s like not to have our own state, we know what it means to defend our own state, our land with the weapons at hand, at the cost of our own lives.” He defied Putin, “when you attack us you will see our faces not our backs.”

The third factor is the desire of Putin to eliminate a sovereign state, and its people, akin to actions of Nazis to eliminate Jews from the earth. Putin’s insane objective to destroy Ukraine is akin to the Nazi Final Solution.  Hypocritically, he invents fantasy of genocide by Ukraine, while preparing to commit one himself.

A fourth factor is a Nazi-like spread of disinformation as well as aggression with a coup in Montenegro, assassinations in London and in Bulgaria, attacks in Chechnya, Nagorno-Karabakh, Abkhazia, and south Ossetia.

Questions about Putin’s state of mind have been raised in the medical world, though there is no conclusive evidence. Is Putin suffering he affects of Long Covid which can affect mental health and may impact his ability   to consider risk in policy, which may entail loss of contact with reality, recklessness, inability to make accurate decisions and to experience a fuzzy mind or mental fog?  Some doctors suggest the pandemic and physical isolation may have led not only to detachment from reality, but   also to hubris, in which the personal and national are identical, with consequent delirium and confusion.

Putin’s actions may also be seen in light of fact that he apparently has a small circle of pollical and military advisers, most of whom are from the KGB of the 1980s, with little military or diplomatic experience.   None of them is prepared to dispute Putin’s arrogant view of his policy on   Ukraine and ambition to regain it. Mistrustful of everyone, his security has been so tight that people scheduled to meet him spend several day in guarded isolation, and then pass through a tunnel with disinfectants.

But there is now official and general understanding of the real Putin, mad or not, or paranoid, or simply bound to his perverse logic, the man who as a youth ran with street gangs in Leningrad and was eager to join the KGB when he was a schoolboy.  As an indication of Western recognition of Putin’s loss of touch with reality and a man who cannot be trusted, It is heartening to witness the increasing response from sport organizations. Russia is banned from May 2022 Eurovision song contest in Turin, one of the world’s largest   televised events, and Russian residents will be blocked from voting in the competition. The soccer Champion League has been moved from St. Petersburg to Paris. The Formula One Grand Prix has been moved from Sochi. Roman Abramovich, owner of Chelsea football club has handed over the running of the club to an independent organization. For Western leaders the ship of fools is still a useful allegory to represent the problem caused by a political ruler who is not in sound mind.

PrevThe Sojourn at Rome
A Decisive Time in World HistoryNext