The Question of Genocide 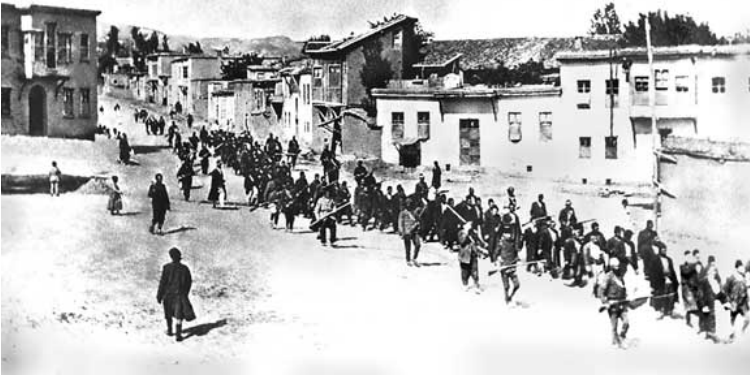 Winston Churchill delivered some of the most stirring and inspiring speeches in history, yet occasionally even he was at a loss for words. In a BBC broadcast on August 24, 1941 referring to Nazi brutalities in Europe, he remarked,”We are in the presence of a crime without a name.” Three years later the name was coined by the Polish Jewish lawyer Raphael Lemkin in his 1944 book, Axis Rule in Occupied Europe, who combined a word with Greek and Latin roots to create “genocide.” He defined it specifically to apply to the Nazi regime’s slaughter of European Jews, now perceived as the Holocaust, and also in recognition of the massacre of Armenians by Turkey in 1915. He explained genocide was a coordinated plan of different actions aiming at the destruction of essential foundations of the life of national groups, with the aim of annihilating the groups themselves.

On December 9, 1948, the UN Genocide Convention adopted by the UN General Assembly defined the concept genocide as “acts committed with intent, from direct statements or orders, to destroy in whole or in part a national, ethnic, racial, or religious group.” The offences mentioned are murder, serious bodily or mental harm calculated to destroy a group, prevention of births, and forcible transfer of children to another group.

At the Nuremberg Tribunal, 1945-46, the Nazi leaders were charged with violations of existing international law, such as crimes against humanity, not with genocide which had not been formally defined. Since then, a number of countries have made denial of genicide illegal.

Apart from a small number of mentally deranged fanatics and vicious antisemites, everyone accepts the concept of genocide is applicable to the Nazi Holocaust. The “Final Solution” was planned with precision at the Wansee Conference on January 20, 1942. Its organizer Reinhard Heyrich explained how European Jews would be rounded up, sent to extermination camps, and murdered. His colleague Adolf Eichmann, no banal figure, had already drafted a list of the number of Jews in the European countries who would be the victims.

There is less unanimity about the application of “genocide” to the Armenian situation. No one denies that massacres of Armenians, during the Young Turk regime in Turkey, of perhaps as many as 1.5 million people took place in 1915 as a result of forced labor, direct murder, death marches, starvation, thirst, rape and torture. The legendary French-Armenian pop singer Charles Aznavour in his song, Ils sont tombes, wrote that “They fell that year, they vanished from the earth, never knowing the cause, or what laws they’d offended.”

Controversy continues on whether these massacres can be termed genocide and whether the massacres were planned and were aimed at the extermination of the Armenian people.

The problem of appraisal is two fold, general and specific. In general, can mass killings always be termed genocide?  More specifically, is the Holocaust unique so the appelation “genocide” is applicable only to the cae of six million Jews massacred during World War II?

Mass killings and elimination of peoples go back to the beginning of history. The Roman army under Scipio in the Third Punic War,143 B.C., conquered  and completly destroyed Carthage, and sold the remaining 50,000 survivors into slavery. The cry of Cato the Elder, “Carthage must be destroyed,” was fulfilled.

Since then, countless atrocities have occurred: German massacre under Gen Lothar von Trotha in 1904 of 100,000 Africans, Herero, in South West Africa; the Armenians by Turkey in 1915; bloodbaths and the Holodomor in the Stalinist Soviet Union 1929-53 and in China 1949-76; Cambodia 1975-8; slaughter of 800,000 Tutsi by the Hutu majority in Rwanda in a three month period in 1994; Bosnia in 1992-5, and in countries such as Sri Lanka, Sudan, Tibet, and East Timor. Can these brutal events be considered examples of genocide?

It is the massacre of the Armenians that remains a controversial political issue. In June 2000 the New York Times published a statement by 126 scholars, including Elie Wiesel, on the “incontestable” fact of the genocide of that people. At present 29 countries, including France and Germany in 2016, and 48 states in the U.S. have agreed as has Pope Francis.

In a somewhat ironic turn of events, on May 29, 2018 the Knesset, Israel’s Parliament, was supposed to vote on a motion for formal recognition that Turkey had perpetrated a genocide against Armenia in 1915. On May 28, the motion was pulled by the Knesset Speaker, Yuli Edelstein. Was this a denial of “historic justice,” or recognition that Israel was conscious of political reality and that the country understood, if motion was passed, it would expect outrage and political difficulties from Turkey and Azerbaijan which fought a 30 year war with Armenia?

The issue at stake is whether the Holocaust and massacres in general and that of Armenians in particular are events of the same type. The Holocaust is well documented. However, some of the facts about Turkish behavior in the area during World War I are disputed. Was it only the regular Turkish army and the central or local governments with deliberate orchestration, or was it irregulars and local Turkish villagers who were responsible for the massacre, or was it military necessity? In a situation of guerrilla warfare all over Anatolia, many Armenians had crossed the frontier and joined Russian forces invading Turkey and were in the city of Van for a time, lured by the Russian promise of independence. It is clear that the Turkish government wanted to deport Armenians from the area of Anatolia, but no official preconceived decision was made to masssacre them all.

Historians differ on whether the Armenians constituted a threat to Turkey because of their cooperation with Russia. Differences of opinion about Turkish behavior became litigious after the distinguished historian Bernard Lewis, generally regarded as the leading scholar of the Middle East, in an interview with Le Monde in November 1993 wrote critically of the Armenian version of the history of the massacres, and later argued there was “no serious proof of a decision and of a plan of the Ottoman government to exteminate the Armenian nation.”

On the contrary, the Young Turks were divided as were regional military commanders and leaders, and in different areas local rivalries, family feuds, personal quarrels, were  intertwined with acts of mass murder. Nevertheless, a Paris court on June 21, 1995 held that Lewis had not “expressed himself without nuance on such a sensitive subject,” and fined him one franc as damages.

The problem remains. Is the Armenian massacre to be identified as genocide, and is it similar to the Holocaust? The Holocaust, or Shoah, an experience that was the embodiment of evil, is unique for a number of reasons: the Nazi ideology of the total elimination of the Jewish people; that total elimination would occur everywhere Jews could be found; all instruments and organizations of the Nazi state were involved in execution of the ideology; the industrial means of carrying out the objective, from individual shootings to using cyanide, asphyxiating people in trucks and large ovens in gas chambers; the impossiblity of Jewish resistance against the Nazi forces, police, and SS.

In contrast, the Armenian massacre happened in one territorial area; it was carried out in brutal but chaotic fashion; it was not preplanned; there was no official order or doctrine to massacre a whole people.

The comparison between the two events of Jews and Armenians seems evident, but there is a problem. Bigotry and hatred is everywhere, and local populations in Europe took part or collaborated in mass murders in a context of competing nationalisms, and ethnic hatreds. Events in World War II showed that people, not officials and not acting in accordance with a doctrine, were ready to eliminate those who for some reason they regarded as pernicious or unacceptable.

This sad conclusion is strikingly reinforced in a recent book Anatomy of a Holocaust by the historian Omar Bartov. He deals with the Nazi supervised genocide in the town of Buczacz, Ukraine where Poles, Ukainians, and Jews once lived side by side. But during World War II, brutalities in the town was a “communal event both cruel and intimate.” Ukrainian as well as German police murdered the Jewish population of the town where everything was a “gray zone.” and hatreds were manifest. Few Poles or Ukrainians tried to help the Jews.

One can conclude that the distinction between the Holocaust and other masssacres and mass killings is valid and well-founded, but is not categorical or unqualified in view of the repugnant behavior of European, non-official, citizens in participation of the Holocaust without obeisance to Nazi doctine. In that perspective, the Turkish mass murder of more than a million Armenians can be regarded as genocide, even though it was not doctrinal in character.