The Scallops War: Food for Thought 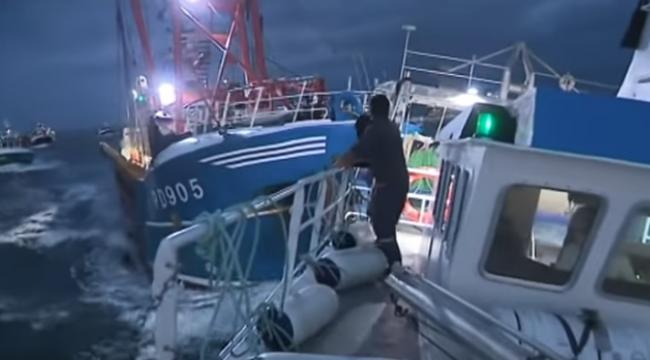 Music may be the food of love, but the quest for food has often been the cause of friction and political insecurity.  That friction has been evident throughout history. Ancient Rome was troubled by the increase in the price of bread. In the 15th century, 1482-84, the Salt War took place between Papal forces and their Venetian allies, and the Duke of Tuscany, over the salt that had been reserved to Venice, the only port allowed to trade in salt. The famine in Ireland in the1840s still has political overtones in British-Irish relations. The 900 day Nazi blockage of supplies to Leningrad, September 1941 to January 1944  caused the death of 1.5 million Russian soldiers and civilians and evacuation of another 1.4 million.

The Cod War, really a number of interstate disputes in the 1950s, 1958, and 1972, for more than twenty years between 1950-75 between Britain and Iceland over fishing rights in the North Atlantic, was concluded in 1976 with UK conceding a 200 nautical mile fishing zone to Iceland. The Turbot War between Canada and Spain for the large salt water turbot (halibut) took place in 1995 off the coast of Newfoundland.

Now we have an outbreak of a new food war, a Scallops War between Britain and France. Differences and rivalries between the two countries are not new in history. If one side proclaims there’s always something fishy about the French, the other can respond you can’t trust people who cook as badly as the English. In the present day context of Brexit negotiations, political and cultural animosity  between the two countries is to be expected. The Scallops War is a reminder and the modern version of the 1748 painting, The Roast Beef of Old England (The Gate of Calais) by William Hogarth which reflects both the tension bwteen a French soldier looking at a large side of British beef, and the meat as a symbol of British wealth and power.

The night was bitter, the stars had lost their glitter and all because of the interaction between the two countries that took a dramatic turn on August 29, 2018 and a few days in September 2018. The scene resembled Dover Beach, and “we are here as on darkling plain swept with confused alarms of  struggle and  fight,” a bitterly internecine conflict of two allied countries, displaying lack of civility and ascerbic tone. The event on August 29 took on the appearance of ignorant armies clashing by night, even if so far no one’s life has been endangered by threatened warlike conduct.

The physical clash is in the area of the English Channel. There, the Scallop War is being fought between British and French fishermen  over the delightful Coquille Saint Jacques, one of the few species whose catch is regulated by national rather than EU  regulations. The battlefield is the area of international waters known as the Baie de Seine, (Bay of Seine) about 15 miles from the French coast.

The context of  the issue is that UK fishermen can dredge for scallops all year round in the international waters in the English Channel, while France is barred from doing so during the summer months, May to September, evidently to allow the species to reproduce. Therefore, one irony in the situation is that UK claims the right to fish in French waters which are closed to French trawlers. The issue is complicated by the charge by the pro Brexit group, Fishing for Leave, that France has caught 60% of the fish in UK waters over the past 40 years.

In previous years there has been a French-UK agreement that the British could enter French waters for a limited number of days. Since 2012,  UK agreed to limit shell fish dredging  during the summer months in return for some French permits. However in 2018 there is no agreement. The French complain that larger UK boats are being used, which can capture larger amounts of scallops and which, according to the French leaves the seabed like a ploughed field because their techniques damage the sea floor. By present law, UK ships are not allowed within 12 miles of the French coast, but smaller boats can dredge for scallops in the 40 mile stretch of international waters in the Baie de Seine.

There has for many years been a problem over getting the lucrative scallops, but rarely led to the use of violence. But the tension almost became war on August 29, 2018 when 35 French vessels confronted 5 British boats, more than 12 miles off the Normandy coast, a confronttion in which stones and smoke bombs were thrown, and boats were ramed leaving holes in three vessels.

Somewhat ominously, French agricultural minister Stephane Travert warned UK  that the French navy was ready to intervene to prevent further clashes if the Scallop War continues. He also commented that UK cannot expect a separate deal with France if the UK  leaves the EU as a result of Brexit negotiations. The Scallop War is not directly linked to Brexit, but the issue of reciprocal access to fishing waters is one of the items in the negotiations.

On the other hand, UK  fishermen want the Royal Navy to help protect them dredge the Baie from Cherbourg to Dunkirk. One reason for this is the fishing of blue fin, a protected fish. Blue fin  is usually found only in the Bay of Biscay and the Mediterranean but warmer waters have sent the species into UK waters. Recently, Frrech trawlers took a haul of 44 blue fin tuna oft the coast of the island of Jersey, that was worth £100,000. UK fishermen are not allowed to catch tuna, but there is no ban on France.

The threat of war continues. French fishermen have warned the UK that they may use “heavy artilley,” slingshots and ball bearings if there is more violence. For her part, Prime Minister Theresa May, who narrowly 307-301, avoided defeat in the House of Commons on Brexit, has called for calm and an amicable solution to the “row” in the Channel. Is it a fight for love or glory?