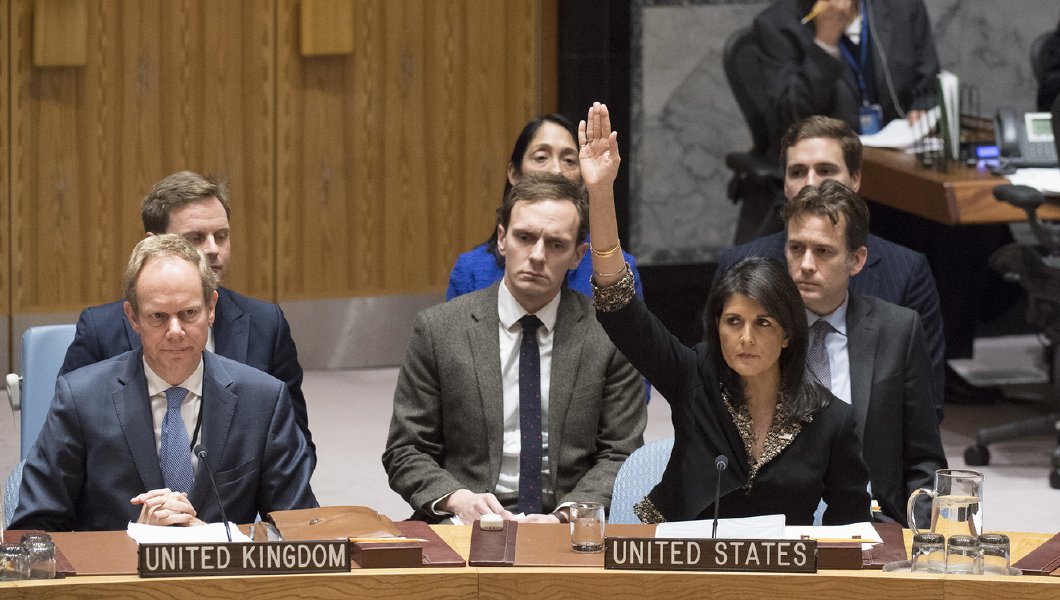 The most moving and eloquent words spoken in the UN General Assembly, the assembly of hypocrisy, incitement, and lies, were articulated by Daniel Patrick Moynihan, the U.S. Ambassador to the UN, after the UNGA on November 10, 1975  had passed the infamous Resolution 3379 that declared that “Zionism is a form of racism and racial discrimimation.”

Moynihan rose to declare that this is a lie which the UN has now declared to be a truth. A great evil has been loosed on the world. The U.S. did not acknowledge, it will not abide by, it will never acquiesce in this infamous act…the abomination of antisemitism … has been given the appearance of international sanction.”

Forty-two years later another candid U.S. Ambassador to the UN, Nikki Haley, has echoed the derogatory tone of his censure and rebuked the UN  for another infamous Resolution, asserting, “I am here to emphasize that the U.S. is determined to stand up to the UN’s anti-Israel bias.

On December 21, 2017 at an emergency session the UNGA passed a Resolution, by 128 to 9 with 35 abstentions and 21 others who did not vote, implicitly referring to the declaration of President Donald Trump on December 7, 2017. In his statement Trump recognized that Jerusalem was the capital of the State of Israel, that the U.S. was planning to relocate the U.S. Embassy in Israel from Tel Aviv to Jerusalem, and that the U.S. would support a two state solution if agreed to by both sides.

The UNGA disgraced itself once again when its new Resolution reaffirmed the thrust of previous Resolutions, nine, since November 1967. It affirmed  that any decisions and actions which purport to have altered  the character, status, or demographic composition of the Holy City of Jerusalem have no legal effect, are “null and void” and must be rescinded. It called on all states to refrain from the etablishment of diplomatic missions in the Holy City of Jerusalem.  In effect it rebuked the U.S. which was told to withdraw its statement.

It has long been a disgrace in international politics that almost all the agencies of the UN  have no credibity and have been hostile places on any issue concerning  the State of Israel. Indeed, of the 93 UN Resolutions passed this year, 83 ( 86%)were directed against Israel. Nikki Haley forcefully explained that Israel can stand up not only for itself and its security, but also for freedom and human dignity in general.

However, this new UN vote is different in that it attacked the U.S.  for exercising its right, that all states have as sovereign nations, to make decisions of its own. Haley declared that the U.S. would not be told by outsiders where to put one of its embassies. Perversely, it is not the U.S. but the Palestinians and anti-Israeli forces who are throwing road blocks to Middle East negotiations, and causing a stalemate. Indeed, long time, 12 years in his 4 year term, Palestinian President Mahmoud Abbas, said he will not accept any U.S. plans for Middle East  peace, as the U.S. is no longer an honest negotiator in the process. Abbas has declared the UN vote is a victory for Palestine, and his UN envoy Riyad Mansou has delighted it is a massive setback for the U.S.

In fact, Palestinian leaders refused to meet with Vice President Mike Pence who had planned in December 2017 to visit Bethlehem and the Nativity Church, as part of the Palestinian policy to refuse the discuss the future of the region with the US. Their action is not only discourteous to the U.S. but a deliberate rebuke to Pope Francis who called in his Christmas Message for prayers  that “the will to resume dialogue may prevail between the parties (Israel and Palestinians) and that a negotiated solution can finally be reached.”

Naturally, the opposition to Trump’s declaration came from many countries not generally regarded as peace loving powers or shining examples as protectors of what the UN Resolution called “the unique spiritual, religious, and cultural dimensions” of Jerusalem. Prominent were Venezuela, a world center for illegal drug trafficking, which claimed the U.S. threatened world peace and that the world was not for sale; Syria, still involved in its brutal civil war;  Yemen, where more than seven million are at risk of starvation, helped draft the anti-US Resolution; and North Korea so concerned with the Holy City that it forgot to set off another ballistic missile on the day of the UN vote.

Yet, it is saddening that among the 128 votes for the Resolution were western democracies, including 22 of the 28 EU countries: France, UK, Germany, Ireland, Japan, Italy, and Switzerland, as well as Russia, China, and Iran. The opposition nine embraced Guatemala, Honduras, Marshall Islands, Nauru, Palau, Micronesia, and Togo, as well as the U.S. and Israel. The 35 abstentions included five EU  states and other normally U.S. allies such as Australia and Canada. Those who did not vote might have feared U.S. warning of funding cuts to them.

Ambassador Haley fought gallantly against the UN Resolution, nonbinding and largely symbolic though it is, as Moynihan did in 1975, and informed UN members that the US was taking names and “we will remember when we are called on to once again make the world’s largest contribution to the UN.” Since 1994, the US has given over $5  billion to Palestine in bilateral economic assistance, security assistance, and humanitarian assistance. It funds almost 30% of the UNRWA budget.

In this there are problems in implementing the Trump policy. A good part of  US aid funding is appropriated by Congress for particular countries and issues. Unilateral cuts to a specific country are not easy, because they may be related to specific packages in countries. There are in fact different, really three, aid streams; military and security assistance that goes to governments; development aid for those in need and for fighting poverty; and humanitarian aid. One dilemma is that it is difficult to cut development aid, because of both the recent decline in commodity prices in developing countries, and the stuggle of those countries with Ebola.

The US as Haley has said is responding. The Trump administration has already issued warnings about other activities of the UN or individual countries. Because of the actions of Saudi Arabia in blockading  food, water, and medecine to Yemen,  the US  threatened to cut aid to the country. In 2011 UNESCO, the first UN agency to do so,  decided to accept Palestine as a full member, though there is no Palesinian state. The US and Israel both froze anuual funding to UNESCO. US law prohibits funding any UN agencies that recognize Palestine as a state. Now in December 2017, the US followed by Israel announced it will withdraw from UNESCO.

Ambassador Haley has made clear that the Trump declaration on Jerusalem  has not harmed the peace process, but like a good detective has recognized the obvious. Interestingly, the US has been in a similar situation more than thirty years ago. The UN Security Council on August 20 1980, voted Resolution 478, 14 to none with the US abstaining, condemning the Israeli declaration that Jerusalem was Israel’s “complete and united capital.” The then Secretary of State Edmund Muskie in the Clinton Presidency responded it was another proof of the unbalanced and unrealistic UN texts on Middle East  issues. The Resolution was a disruptive attempt to dictate to other nations. It  did nothing to advance the cause of peace. The continuing problem is that the UN is singing the same discordant tune over and over again. For the US it is time to change partners and advance.

The international uprising against the Trump statement antipated by the usual suspects did not take place, or was far more muted than they proclaimed. The opposite may be occuring.

Guatemala ‘s President Jimmy Morales, an evangelical Christian, and TV personality, plans to follow the intentions of President Trump and move his country’s embassy to Jerusalem. Both the Czech Republic and Costa Rica are considering similar action. And hyprocisy will have its day. The Organization of Islamic Cooperation, OIC, has unilaterally without negotiations, called for East Jerusalem to be the capital of the Palestinan state. Turkey has announced, in spite of its involvement present war on the Kurds, that “with God’s permission,” the day is “close” when Turkey will open an embassy in that Palestinian state. So much for the UN condemnations of decisions altering the “character, status, or demographic composition of the Holy City.”