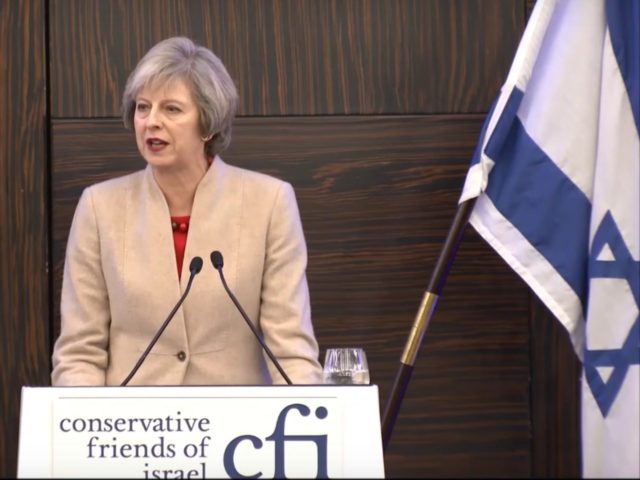 British Prime Minister Theresa May is making history from which there is no turning back in the effort to restore what she called “our national self-determination” after 44 years of British membership first of the EEC, the Common Market, and then of the European Union. On March 29, 2017 she officially invoked Article 50 of the Lisbon Treaty of December 2007 to start the Brexit process, withdrawal from the EU in accordance with the vote on the referendum on the issue on June 23, 2016, when 51.9% voted in favor of leaving the EU.

The Lisbon Treaty provides for a member state to withdraw from the EU in accordance “with its own constitutional requirements.” In view of the increasingly British criticism of the bias against Israel in United Nations bodies, especially the UN Human Rights Council (UNHRC), perhaps Prime Minister May is considering invoking similar constitutional requirements to withdraw from them.

Certainly there are some indications of this possibility. The British government changed its vote on March 24, 2017 at the UNHRC meeting which issued a “perverse” resolution for allegedly mistreating Druze residents on the Golan Heights. May asserted that in the future Britain would oppose all UNHRC resolutions concerning Israel unless the bias of the organization stopped. Britain had in the past usually abstained in the resolutions condemning Israel introduced by the Syrian and Islamic states. Now Britain will vote, like the US, against them.

The British Ambassador to the UN, Julian Braithwaite, on March 24, 2017 spoke truth to the organization about its bias. The UN Human Rights Council (UNHRC) had passed a series of four resolutions singling out, as usual, only Israel for violating human rights of Palestinians, and calling on Israel to return control of the Golan Heights to Syria. Ambassador Braithwaite asserted “Today we are putting the UNHRC on notice. If things do not change in the future, we will adopt a policy of voting against all resolutions concerning Israel’s conduct in the occupied Syrian and Palestinian territories.”

By tragic coincidence the UN bias was manifest that very week concerning the Islamist terror attack on Westminster Bridge and Parliament in London that  killed five people and injured more than 30. The silence of the UNHRC on this terrorist attack, as well as on the 25 terrorist attacks and incitements in which at least 30 Israelis were killed, was deafening.

The stronger British position on UN bias follows the straightforward and unusual remarks on December 28, 2016 by Prime Minister Theresa May who severely criticized the speech of then Secretary of State John Kerry. She rebuked Kerry who had blamed Israel for the stalled peace process, and had disrespectfully referred to the government of Israel as the most right wing government in Israel history. May regarded this as an unwarranted attack on the composition of the democratically elected government of an ally.

In similar spirit to the British pronouncements, the U.S. State Department Spokesman Mark Toner announced on March 20, 2017 that the US will boycott a session of UNHRC that will discuss once again alleged Israeli human rights abuses against the Palestinians. For some time it has been a travesty of objectivity that Agenda Item Seven of UNHRC rules mandates that the organization must discuss alleged Israeli human rights abuses at every session of the Council.

The significance of this mandate is that Israel will be discussed regardless of what is happening in other countries in the Middle East of the rest of the world. Israel  is the only country in the world to which a  specific mandate applies. Alleged abuses of human rights in all other countries are discussed under Agenda Item Four. The US is opposed to the Agenda Item Seven mandate. So far President Trump has not made any formal statement on the issue, but the Administration is reconsidering its participation in UNHRC.

It is pertinent to the decision on this that President George W. Bush in 2006 refused to join UNHRC, but President Barack Obama in 2009 decided to join, and rejoin when its first term of three years ended.

The British diplomat Julian Braithwaite also opposed Agenda Item Seven, pointing out that Israel had been condemned for its occupation of Golan Heights formerly in the hands of Syria; by contrast Syria which has been murdering and butchering people on a daily basis, is not a permanent standing item on the Council’s agenda.

Even more forthright is Nikki Haley, former Governor of South Carolina and now US Ambassador to the UN. She declared to the UN, “You are not going to take our number one democratic friend in the Middle East and beat up on them.” Displaying herself as a new sheriff in town she warned the UN, the “days of Israel bashing are over.”

But not all nations feel as do the US and UK regarding the animosity towards Israel. In recent weeks this has been shown in the Netherlands and in Sweden.

In the Netherlands although Dutch Jewish leaders, fearing the event would incite antisemitism or pro-terrorist sentiment, and embolden terrorists, urged the Mayor of Rotterdam to cancel a conference of  pro-Hamas group, the Palestinian Return Center due to be held on April 15, he refused to do. His excuse was there was no proof that Hamas is involved and therefore he could not do anything.

More serious has been the little known activity of Sweden regarding Israel. Some of this has been revealed in a French report issued on March 29, 2017, “Les Liaisons Dangereuses de Banques Francaises avec la Colonisation Israelienne.” The report makes recommendations to French banks, insurance and utility companies in relation to Israel settlements. The title indicates the thrust of the report which condemns the Israel colonization, the illegality of the Israeli “colonies” that restrict the Palestinian people and are an obstacle to the resolution of the conflict. It concentrates on the Israeli banking system that it regards as an essential tool of “colonization.”

Three things are pertinent about the report. One is that the settlements in the disputed area are always referred to as “colonisation.” The second is that it is based on UN Security Council Resolution  2334 of December 23, 2016 and calls on French institutions to respect it  and implement recommendations regarding Israeli settlements. 2334 was the resolution the Obama administration allowed to pass the Security Council because it abstained, refusing to veto the resolution.

The third most important issue is the funding of the report. It was produced by a number of Palestinian and pro-Palestinian organizations, including  the Association France Palestine Solidarite, French League of Human Right s, founded in 2001, the c CGT (General Confederation of Labor, one close to the Communist Party),and Al Haq, based in Ramallah and whose director is alleged to have ties to the extreme PFLP (Front for the Liberation of Palestine). But it was funded by the Swedish International Development Cooperation Agency, a government agency of the Swedish Ministry of Foreign Affairs based in Stockholm. The Agency has for some time development assistance for Palestinian economic and social development.

Perhaps the Trump administration will not be able to influence Sweden to change its anti-Israeli position, but, like the British May Government, it can and should stick by its threat to pull out of the UNHRC, and by inference other UN bodies, if they continue their anti-Israeli bias.