The United States Must Leave the UN Human Rights Council 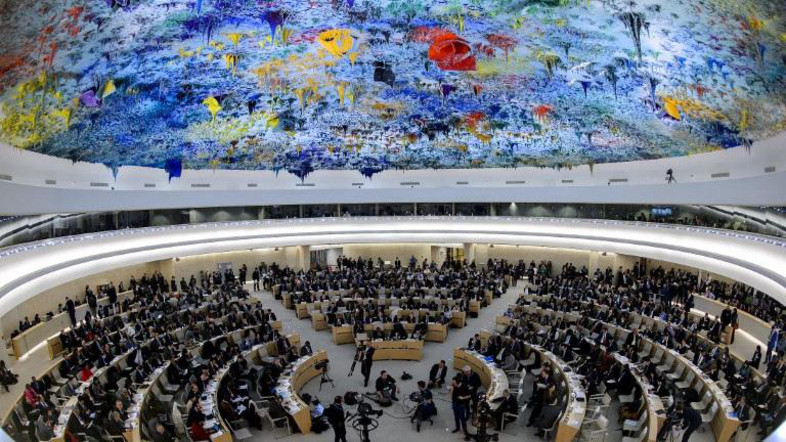 By now it is clear that the UN Human Rights Council, created in 2006 with noble intentions on the basis of the 1948 Universal Declaration of Human Rights, is one of the international organizations that has little interest in the real violations of human rights in the world. The majority of the 47 members of the UNHRC have shown little concern for their mandate, to be responsible for strengthening the promotion and protection of human rights around the globe, for addressing situations of human rights violations and making recommendations on them.  How sanguine could one be about a group that includes Cuba, Congo, Burundi, Angola, Afghanistan, Saudi Arabia, Qatar, Venezuela, China, UAR, and Pakistan.

Moreover, the geographical distribution of membership is weighted in favor of Africa and Asia: African states 13; Asia and Pacific 13; Latin America and Caribbean 8; Western Europe and others 7; and Eastern European 6. Membership can also be evaluated in the light of the Global Gender Gap report of the World Economic Forum that lists the gap in 144 countries: almost at the bottom are Pakistan, Qatar, Egypt, and Saudi Arabia, members of UNHRC.

It is not too strong to argue that UNHRC has been perverted to such a degree that it is a useless and worthless organization, hypocritical and skilled in its formulation of double standards for different countries. Those double standards mostly relate to the disproportionate amount of time and number of critical resolutions relating to the State of Israel. As of 2017, Israel was condemned 78 times, compared with peace loving Syria 29 times, friendly North Korea 9 times and Iran 6 times. Most non-democratic states, such as Saudi Arabia, Russia, and China, have never been condemned.

Every observer recognizes that the agenda of the Council is biased against Israel, virtually transforming it into an international anti-Israeli platform. Only one country is permanently on the UNHRC agenda, Israel. Every March, UNHRC spends two sessions to debate human rights violations in the countries of the world. and one whole session devoted just to Israel

What is most disappointing in the operation of UNHRC is that the democratic states have been reluctant to end the anti-Israeli bias, but have acquiesced in it, often by abstaining. The continuation and the extent of the bias was fully displayed by the meeting of the 37th session of UNHRC on March 23, 2018 which approved eight critical resolutions, one each on the peace-loving countries, North Korea, Iran, and Syria, which evidently have not troubled the world, and five on Israel that it apparently considers a menace to the world.

It is worth looking at the five specific anti-Israeli resolutions, to see the extent of the hypocrisy and bias of UNHRC.  Details have been drawn from the analysis of Hillel Neuer, Executive Director of UN Watch.

The first is a resolution drafted by Syria and submitted by the Islamic group. UNHRC is deeply concerned at the suffering of the Syrian citizens in the occupied Syrian Golan due to the systematic and continuous violation of their fundamental and human rights by Israel since the Israeli occupation of 1967. The resolution was accepted, 25-14 and 7 abstentions.

A second resolution called on all states to ensure their obligations of non-recognition, non-aid or assistance with regard to the serious breaches of “peremptory norms of international law” by Israel. In particular, it referred to the acquisition of territory by force, and called for cooperation to reverse Israel’s illegal policies and practices.  This was passed by 43-2 (Australia and U.S.) and 1 abstention. Besides the U.S., Australia, a new member of UNHRC, was the only country that voted against this and all the other anti-Israeli resolutions.

The third resolution expressed grave concern at the continuing violation of international humanitarian law and the systematic violation of the human rights of the Palestinian people by Israel, the occupying Power. This agreed by 41 countries to three disagreements (Australia, Togo, U.S.).

The fourth called on all states not to provide any assistance to be used specifically in connection with the settlements in the territories occupied since 1967. This included financial transactions, investments, purchases, procurements, provision of services, and other economic and financial activities benefitting Israeli settlements. It passed 34 to 4 (Australia, Hungary, Togo, U.S.), and eight abstentions.

The fifth resolution, somewhat incoherent, called on everybody to implement the recommendations in three reports: the independent commission of inquiry on the 2014 Gaza conflict (written by William Schabas); the independent international mission on the implication of Israeli settlements on the civil, political, economic, and cultural rights of the Palestinian people; and the UN Fact Finding Mission on the Gaza Conflict (the Goldstone report). Most important was non-involvement in the provision of arms to Israel.  It passed by 27-4-15, and the majority included Belgium.

Interestingly regarding this resolution, left unsaid were two factors. One was that Schabas had worked as a legal consultant of the PLO and his report cannot be considered neutral. The other was that the report by Judge Richard Goldstone was critical, but in April 2010 he retracted many of the charges he made in it.

In the voting, Australia and the U.S. by voting against all the five resolutions demonstrated political sanity in this theater of the absurd. Surprisingly, Germany voted in favor of three, and the UK in favor of two resolutions.

The UNHRC has been obsessed with the question of Israel and disputed or occupied territory, and Israeli settlements. In September 2014 it approved, by 32 votes and 15 abstentions, a data base of companies doing business in areas under Israeli “occupation” including East Jerusalem and Golan Heights. In February 2018, it reported on 206 companies with ties to settlements, in effect a backlist of Israeli and multinational companies active in disputed territory, and really advocacy of BDS.

The biased resolutions of UNHRC are not simply obstacles to any hopes for progress for negotiations to end the Israel-Palestinian conflict and are thus counter-productive. They are also an obstacle to any real discussion of violations of human rights in the world, and are therefore a defeat for anyone interested in ending these violations.

The UNHRC resolutions have no enforcement mechanism but they are a disgrace to impartial analysis and do not reflect any perspective for a just and lasting solution of the conflict. U.S. Ambassador to the UN, Nikki Haley has been strongly critical of the UNHRC, has said that U.S. patience with it is not unlimited, and has threatened to leave. The time to leave is now. President Donald Trump, in disappointment with international organizations, has already quit UNESCO, and cut UN funding. He should now withdraw the U.S. from UNHRC.