The Use of Poison in International Politics 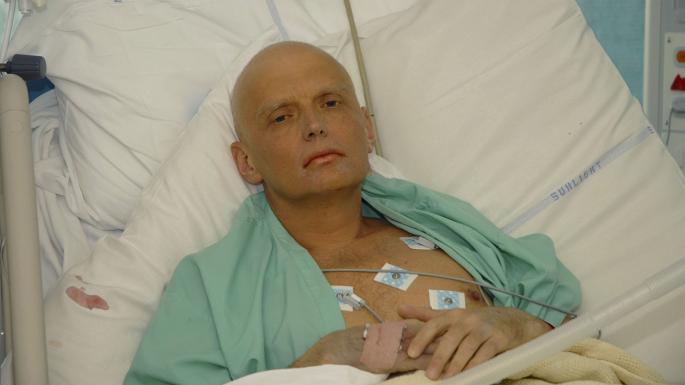 Alexander Litvinenko in hospital after being poisoned with polonium-210

The pellet with the poison’s in the vessel with the pestle, the chalice from the palace has the brew that is true. This tongue-twisting line uttered by Danny Kaye in the 1956 film The Court Jester, is perhaps the funniest scene in Hollywood movies, but it is also relevant to past and present attempts and actions to commit murder by operatives of the Russian regime.

Hamlet’s father knew of the vial of poison poured into his ear that moved like quicksilver though the veins and curdled the blood. British officials during World War II were successful in preventing a similar poisoning of the well known writer, artist, gardener, protector of the Barbary Apes in Gibraltar, 1953 Nobel Prize winner of Literature, and smoker of 3,000 cigars a year and 250,000 in his lifetime, Winston Churchll.

We now learn from documents recently revealed that the Prime Minister was protected by the British secret service in extraordinary fashion. All his cigars, bought or given to him by well wishers were tested on mice to ensure they were not poisoned with cyanide by Nazi spies. The head of MI5’s counter intelligence, Victor Rothschild, believed there might be “tiny explosives” in the cigars which detonte when lit. In addition, MI5 tested, and no doubt tasted, a case of 1798  Armagnac given Churchill by a French general he met in Parliament Square close to the House of Commons. The expensive liquor was tested on a cat who survived, as did Churchill.

None of the cigars were poisoned, but they remain valuable. Various exhibitions have indicated the value of objects associated with Emperor Napoleon. A baton used at his ceremony to become Emperor at Notre Dame in 1804 was sold for 100,00 euros, and his first wedding certificate for 25,000 euros. Objects of the less majestic Churchill, if not equally valuable, are sought. At an auction in Boston in March 2018, the two inch butt of a La Corona Habana said to come from the cigar smoken by Churchill in 1947 was sold for $12,000.

The use of poison has claimed the lives of prominent individuals throughout history. Among those murdered or suspected of having been poisoned are Alexander the Great, Emperor Augustus, Emperor Claudius, the victims of the Borgias, Medicis, Viscontis, and the Venetian Council of Ten.

More immediately relevant is the legacy of the Special Office, “The Cell,” created in the Soviet Union in 1921, the first poison laboratory of the Soviet secret services that became an institute in the KGB. Among its actions were assassination of critics of the regime: Georgi Markov, the Bulgarian writer working for the BBC in London, killed in 1978 by a poisoned pellet shot from an umbrella; Alexander Litvenko, former officer of KGB and FSB, Federal Security Service, on November 23, 2006 from a poisoned drink, polonium 210 radiation syndrome after meeting wih two Russians in the Millennium London hotel .

Litvenko had accused his superiors of murdering Boris Berezovsky, had held that Vladimir Putin’s rise to power was the result of a coup organized by the FSB, and accused Putin of ordering the murder of Russian journalist Anna Politkovskaya. She, who had criticized Russian military and governmental actions in Chechnya was murdered on October 7, 2006 in the elevator in her apartment house. It needs no explanation that Garry Kasparov, former world chess champion, now a political activist opposing policies of Putin, drinks only bottled water, eats food prepared by his bodyguards, and lives in New York City.

In 1997 the Chemical Weapons Convention outlawed the production and use of chemical weapons, but was disregarded by President Assad in Syria. Now, as a result of murders and attempted murders of Russians in Britain, especially the attack on Sergei Skripal in Salisbury on March 4, 2018, the issue of poison has become an important if not the central one, in Western relations with Russia as two announcements show. One by Prime Minister Theresa May is that two Russians, Alexander Petrov and Rusian Boshirov, probably aliases, alleged members of the GRU, had been charged with murder in Salisbury. They are unlikely to come to trial, and probably have been killed in Russia to hide traces of their alleged crime.The second is the announcement by the British Home Secretary, Sajid Javid, that the government is reopening the investigation of the deaths, said to number 14, of ex-Russians suspected of having been murdered by poison and other methods in the UK in recent years.

An investigation of this kind will take some time considering the number of victims. Among them is Nikolai Glushkov found on March 12, 2018 strangled in his home in New Malden, south west London. Glushkov, who had been deputy director of  the Russian state airline Aeroflot, was accused in Russia of criminal conspiracy, sentenced in 1999 to five years prison, for “money laundering and fraud,” and sought asylum in UK in 2006. He had previously got no kick from champagne, but in the company of two Russians in a Bristol grand hotel he drank a glass of the liquid that had beeen poisoned. His problem was he was a friend of the oligarch Boris Berezovsky, who was found hanged in his bathrobe in his house near Ascot in Berkshire on March 23, 2013, but who, Glushkov said, was murdered by Russians.

Those Russians are to be found, but the two involved in the attack on Skripal have been identified as individuals with official passports and alleged to be affiliated with the GRU military agency, (Main Intelligence Directorate), linked in the past to Cheka, NKVD, and KGB, and which changed its name in 2010 to GU (Main Division). The stated offence is spraying, through perfume bottle, the nerve agent Novichok on the front door of the house in Salisbury of the 63 year old former Russian spy Sergei Skirpol and his 33 year old daughter Yulia. The two Skirpols survived, but others died from exposure to the nerve agent. What is important is that the GRU gets orders from the highest level of Russian government, the miitary, the defense ministry, the Kremlin, possibly including Putin, but does not report directly to he president.

In the constellation of Russian agencies, the FSB is viewed as the domestic intelligence and counter intelligence body, and the SVR as the foreign intelligence service. More attention must be paid to the GRU, the main directorate, formed as the intelligence agency of the armed forces, competing with the KGB security service. Its head Igor Korobov reports to the chief of the General Staff and the defense minister.

Most recently the GRU has partipated in hacking, using a malware called X Agent, and in cyber warfare aimed at U.S. military faciities. It was active in seizure of Prague airport in 1968, leading to the Soviet invason of Czechoslovakia, in the assassination of the Afghan president in 1979, the end of the Malaysian passenger airline in July 2014 killing all 298 aboard, the attempted coup in Montenegro in 2016, and in the Russian invasion of Crimea.  It is a highly disclpined organization, essentially more aggressive and more secretive than other Russian institutions, able to strike at British and U.S. facilities.

It is a useful start that the U.S. Department of Justice on July 13, 2018 indicted 12 Russians for attempting to hack U.S. emails and computer networks; all responsible were operatives of GRU. It is time that Congress pay more attention to and take action against the GRU menace. Perhaps Special Counsel Robert Mueller might more profitably turn his attention to this rather than to the seemingly endless search for a mole in the 2016 electoral campaign. More important is an answer to the question, are the actions of the GRU directly linked to the Kremlin and the office of President Putin.