The Wise and the Wicked 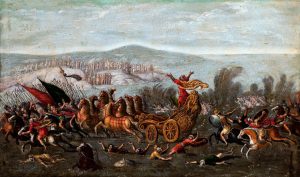 The festival of Passover every year is a ceremony of rejoicing over the Jewish exodus from Egypt 3500 years ago.  The story, the Haggadah informs the participants of the obligation to inform and share this part of Jewish history with their children. Generations are linked in the account of the history when Jews were slaves of the Pharaoh in Egypt, and when the Lord took them out of Egypt with a “strong hand,” and commanded them to keep the testimonies, ordinances and statutes.  It is a story of liberalism and freedom from oppression. In a seemingly baffling passage, the Haggadah tells of four sons, the wise one, the insolent, wicked or cynical one who excluded himself from the community and does not fulfill commandments, the simple one who has sufficient intelligence to ask questions, and   the one who does not know how or what to ask.

The parable of the four sons is relevant and appropriate in this era of cancel culture, when Western achievements are less celebrated than emphasis by Westerners on past or even present shameful oppression, racism, and sexism. Most evident is the counterpart of the wicked and cynical one that has emerged in cultural and educational matters. In general, the effect of their activity is the erasing, not illumination of history, the assumption of Western guilt for its past, the diatribe that little or nothing of value has ever come out of Western civilization, and above manifestations of antisemitism against individual Jews or Jewish organizations, or unremitting invectives against the State of Israel.

The four sons were dramatically illustrated at meetings of the UN General Assembly, starting with the one on March 3, 2022, calling for the immediate withdrawal of Russian troops from Ukraine. The vote on this Resolution was 141 in favor, 5 against, and 35 abstentions. On this occasion, the wise formed the majority. The wicked are clear, Russia, North Korea, Eritrea, Syria, and Belarus, and should be labeled as such. What is disappointing is the 35, that included China, Pakistan, India, Iraq, and Iran, who were either simple or were ignorant.

Here are some indications of the wicked and cynical at work in different places and occupations.  In France, a man Jeremy Cohen, 31, an observant Jew wearing a skull cap on his head, was run over by a tram in Bobigny, suburb of Paris on February 16, 2022. He had been attacked by young men from the local Muslim community and was trying to flee from an antisemitic attack by a wicked gang of about ten people, ran and was hit by the train and did not survive. The police were slow to investigate the event in serious fashion, and the story was not well covered by the press.

In East London, in one of a number of antisemitic incidents, a group of Chassidic Jews were walking on the Sabbath in Stamford Hill, an area with a considerable Jewish population, when they were yelled at by wicked persons in a double decker bus who wanted them to be expelled, “Yiddos, go home.” By chance, this is the parliamentary constituency of the left-wing Labour party politician Diane Abbott who remarked in a BBC program that members of the Charedi community in her constituency who wore religious clothing are targets of hate crime because they wear “that costume.” Members of the Labour party have been guilty of antisemitic remarks. One of them, the extreme leftist Ken Livingstone, was suspended from the party for two years for claiming Hitler was a Zionist.

International organization have sheltered many wicked, cynical sons. One of them, the UN Special Rapporteur on Palestine, Michael Lynk, Canadian lawyer, has just ended his six-year term in the supposedly neutral position. Known for at least three decades for his anti-Israeli bias, and his membership on boards of Arab and Palestinian lobbying groups, for his support of “Israel Apartheid Week,”  Lynk published  12 reports and countless press releases hostile to Israel . In one of them,  Israel is illegal,  is an alien power living in the “fever dream of settler-colonialism,” subjecting the population of Gaza to a “medieval military blockade.”

Lynk’s counsel is that Israel intends for Palestinians to be “encased in a political ossuary, a museum relic of 21st century colonialism.” In his last report, presented to the UNHRC in March 2022, Lynk described Israel as a covetous alien entity, now an apartheid state. It was wicked of the UNHRC to fail to issue a single statement critical of the terrorist Hamas or the PA for the thousands of rockets fired at Israeli civilians, and for only one statement that mentioned human rights abuses by the PA.

The wicked son has given way to a kindred daughter. Lynk retired on April 1, 2022, and was succeeded by Francesca Albanese, an Italian lawyer, who worked in Jordan, and who has accused Israel of genocide and war crimes. She is not a neutral party, calling Israel an apartheid state, and comparing the creation of Israel to the Nazi Holocaust. She published a book in 2020 on Palestinian refugees, has criticized the Oslo Peace Process and has accused Israel, only Israel, of committing crimes against humanity.

More wicked or cynical sons and daughters are members of the British National Union of Students, now involved in a new problem concerning antisemitism.  Shaima Dallali, a woman of Sudanese- Tunisinan heritage, who had been president of the City University of London student union, was in April 2022, elected  for a two year term  to be the leader of NUS which purports to represent the interests of  more than seven million  students across 600 student unions in the UK.

The activist Dallali has posted a series showing protestors calling for an intifada and an attack on Tel Aviv, criticisms of Israel for its actions in Gaza. Twice she posted the Hamas rallying cry, “From the River to the sea,” the elimination of Israel. For her, a Jordanian   preacher who was critical of Hamas was termed a “dirty Zionist, while a Muslim Brotherhood cleric who called on God to kill all the Jews, and who was expelled from Britain, was the “moral compass” for the Muslim community.

In 2012, Dallali quoted an Islamic anti -Jewish battle cry, “Jews, member Khaybar, the army of Muhammad is returning.” Khaybar refers to the massacre by Muslims of Jews in that town in 628, and the threat that the massacre of Jews will reoccur. Dallali  has supported the BDS movement and has been associated with a number of extreme Islamist and other groups, such as Cage, a Muslim advocacy group that has supported convicted terrorists, and other pro-Palestinian group in Europe.

How about the wicked and cynical at play in educational institutions?

Durham University is “decolonizing” its math curriculum. It asks professors to make the math subject they teach more “inclusive” and to consider the cultural origins of the mathematical concepts, focuses, and notation.  It holds that Western mathematics have dominated the discipline as western authors have dominated the field of literature. The math curriculum will be decolonized since our understanding of mathematics is global.  When relating math to the real world, examples of math should be presented in a context outside a Western frame of reference.

Essex University cancelled a talk by Professor Jo Phoenix, criminologist at the Open University, fearing disruption. Phoenix, who was called a transphobe, was due to speak on the subject of trans rights and prison placements and would argue there are problems with applying trans rights to criminal justice.

Essex has apologized for the cancellation, but the event is another example that the cowardly, the wicked, have prevented speeches and books that attract “negative attention,” and lead to speakers being abused.

Stirling University is not apologizing for removing Jane Austen’s Pride and Prejudice from its classes because it plans to “decolonize” the curricula of its literature offerings, and to make students aware of the language of colonialism.  She will be replaced by Toni Morrison, an icon in her own right.  Stirling warns that one of its English literature modules includes material that includes discusses colonialism, enslavement, violence, sexism, and issues surrounding representation of gender, class, race, and mental health. Stirling will include material on racial differences, critical race theory, and the aesthetics of the contemporary U.S. and African American novel.

About a dozen wicked protestors at the University of Bristol barricaded a large door, a fire exit, at an event in its Museum and Art Gallery order to cancel a speaker, Yaron Brook, 60-year-old libertarian chair of Ayn Rand Institute, for his “hateful and sinister” views. He was invited by the university Liberty Society to talk about the causes of war in relation to the ongoing conflict in Ukraine, and to help raise funds for the Ukrainian war effort.

The wise son knows that what is needed is an environment for the free exchange of ideas and discussion.

The wicked son believes in censorship.

PrevIsis urges jihadists to strike Europe and Israel while West is distracted by Ukraine
Which Came First: Twitter or the Troll?Next