The World Should Accuse Putin 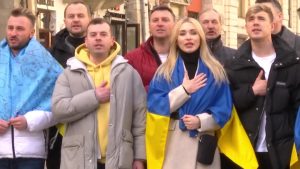 The glory and freedom of Ukraine has not perished. Fate will at last smile upon the Ukrainian people, our enemies will fade and die.

These words are the dramatic and highly pertinent opening lines of the Ukrainian national anthem, lines that epitomize the heroic resistance of Ukrainians against the barbaric brutality of the aggression led by the war criminal Vladimir Putin.  Some countries have anthems that are generally and immediately recognizable by listeners as symbolizing their country: The Star-Spangled Banner, God save the Queen, La Marseillaise, Deutschlandlied. Less known and recognizable is the Ukrainian national anthem which in recent weeks has been played and sung fort the first time in the concert halls of Western nations.

Composed in 1863 by Mikhailo Verbytsky, an ordained parish priest, the anthem based on a patriotic poem by Pavlo Chubynsky, Ukrainian poet and ethnographer, the song became a rallying cry for nationalist sentiment before being banned by both the Tsarist Russian and Communist governments. The anthem revived after the end of the Soviet Union and was finally officially accepted as the Ukrainian national anthem in 1992, though lyrics were changed because the original lines of the poem were regarded as too pessimistic.

The anthem is a reminder of the struggle of the Ukrainian people in the chaotic history of the country and the region in the area that was the center of the first eastern Slavic state, Kyivan Rus in the 10th-12th centuries. Though the state disappeared through conquest and amalgamations, its cultural and religious legacy lasted, and laid the basis for Ukrainian nationalism. With the dissolution of the Soviet Union, Ukraine achieved independence in August 1991, and the new state was quickly recognized as an independent state by most of the international community. Democracy became more evident in recent years with the election of pro-Western Petro Poroshenko as president in June 2014, and then Volodymyr Zelensky in May 2019.  Zelensky, law student, actor, producer virtuoso dancer, was an unlikely choice, but has become the center of power, the symbol of Ukrainian resistance, who declared of the Russians, “They want to break our nationhood.”

Zelensky initially attempted to engage in dialogue with Putin, but the Russian leader who had invaded Crimea in 2014, falsely claiming to protect ethnic Russians who were living there, who stated that Ukrainian identity was an accident of history, and who declared he would eliminate the rise of fascism and neo-Nazism in the country, then invaded Ukraine on February 24, 2022.

Whatever the real motives of Putin, the vicious unprovoked Russian aggression is aimed at delegitimizing the existence and government of Ukraine. That explains the barbaric behavior, the indiscriminate committing of war crimes, savage attacks on civilians in their homes, the destruction of 90 per cent of the infrastructure of Mariupol, and demolition of whole villages, and on April 3-4. 2002 the massacre in Bucha where grim photos show bodies of at least 410 civilians have been uncovered, beaten, tortured, executed. This event is truly a game changer, with global revulsion at this indication of evil on earth with evidence of the horrors, bodies piled on top of each other, rape, torture, corpses found with hands bound, mass graves, dead people found in barrels and basements.

The Bucha massacre is beyond shameful, both in itself and because Russian spokespersons have declared that the killings and brutalities are a Western hoax and conspiracy, staged performances, disinformation, and fake news. The events are reminiscent of Nazi propaganda led by Joseph Goebbels except that Putin attempted to justify his unprovoked aggression by characterizing Ukraine as a gang of drug addicts and neo-Nazis, and that he was going to de-Nazify the country by force. For him it is irrelevant that President Zelensky is of Jewish descent if not personally devout, that his three great uncles were murdered by the Nazis, and that the memories of Babi, Babyn,  Yar in September 1941, where 33,000 Jews were murdered, and the massacre of 50,000 Jews in Odessa in October 1941 have not been forgotten. Far from “de- Nazification,” whatever that was supposed to mean, Putin’s actions are reminiscent of Tsarist pogroms of Jews and restrictions of Jewish life in the Pale of Settlement, the western part of the Russian empire, which included most of present-day Ukraine.

There is no indication of regret or remorse by Putin or Russian political and military leaders.

Indeed, the new atrocities are not unique. During the Russian civil war in 1919, hundreds of innocent civilians were brutally murdered by the Bolsheviks, with countless atrocities and rapes. During the invasion by the Soviet Union of Afghanistan, the Russian military would    regularly bomb or raid villages. Today, Russia in Ukraine is applying its familiar concept of “collective responsibility,” killing whole communities, where resistance has taken place, and hunting the leaders of civil society.

Some countries are reluctant to break with Russia. It is disappointing that the German finance minister Christian Lindner on April 4, 2022, rejected a EU embargo on gas imports, and was unwilling to act on a ban on Russian energy imports, Less surprising is Viktor Orban who won his 4th term  as president of Hungary in a landslide, which  is therefore neutral over Ukraine.  Orban, who is a friend of Putin, has named the real enemies, Brussels bureaucrats, the international mainstream media, and above all,  Zelensky.

South African president Cyril Ramaphosa holds the war could have been avoided if NATO had heeded the warnings from among its own leaders and officials over the years that its eastward expansion would lead to greater instability in the region, so he has refused to take sides. India is ambivalent because Russia is offering oil at a heavy discount, “we will be happy to take that.”

Most of the world has recognized the horrors of Russian behavior, as well as the difficulties it has caused, for at least two reasons: shortages of food for countries such as Lebanon and Egypt, because of inability of the breadbasket of the world to produce, sow, harvest, and export of wheat; and the aggression has created the largest refugee crisis since World War II, as more than 4 million have fled the country and nearly 7 million have been displaced.

Justice must be done. A cease fire must be agreed. It is insufficient for international authorities to say simply they are “deeply shocked,” by Russian crimes. Action should be taken, if not all of these suggestions.

PrevPATCON: Abuse of Language, and the Related Communist Influenced FBI
What is Caesar’s, and what is God’s?Next