The Year of Four Wars 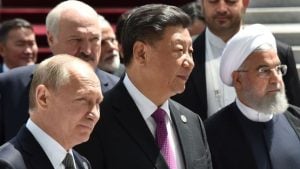 It’s not implausible that the United States will find itself involved—directly or indirectly—in four wars this year. The vultures have come home to roost.

Last August the United States took flight from Afghanistan, the Western-supported government in Kabul collapsed and—20 years after being overthrown for harboring Osama bin Laden’s al-Qaeda, responsible for the Sept. 11, 2001 attacks and nearly 3,000 dead—the medieval Islamists of the Taliban returned to power.

Many warned that the Biden administration’s unforced retreat from Afghanistan made the world a more dangerous place, that Russia, China, Iran and North Korea were watching.

Moscow, Beijing, Tehran and Pyongyang are fundamentally hostile to the U.S.-led West and international order established at the end of World War II. This arrangement, premised on free trade, containment of the Soviet Union and organized primarily by democracies led, however unevenly, to a freer, more prosperous world. That was so even when disrupted by wars like those in Korea and Vietnam.

Until about 2008, when the politically weakened, lame-duck administration of President George W. Bush stood by as Russia invaded Western-oriented Georgia, and certainly by 2013, as Henri-Bernard Levy recently has written, when President Barack Obama disregarded his own chemical weapons redline in Syria. He farmed out Middle East policy implementation to Moscow and thereby contributed to international destabilization, including a flood of refugees.

Each member of the sinister quartet—even with trappings of elections and legislatures—is a dictatorial police state striving to undermine the example of prosperous democracies. And each opportunistically seeks foreign adventures to boost its dubious domestic legitimacy.

America’s chaotic exit from Afghanistan, leaving thousands of citizens and green card holders plus tens of thousands of Afghan partners behind, suggested to the hard men running Russia, China, Iran and North Korea that Washington does not know what its national security interest are, let alone how to secure them. As a result, President Joe Biden and his foreign and defense policy teams have made it more likely that 2022 will not be a better year than 2021.

Instead, 2022 could be the year of four wars. Europe miscalculated its way into World War I, Western democracies’ appeasement of aggressive dictators helped bring on World War II, and our wishful thinking caused self-sabotage in Afghanistan and Iraq. Yet now, Washington still lags behind the curve of ominous trends.

Putin was sincere in asserting that “the collapse of the Soviet Union was the greatest geo-political disaster” of the 20th Century and in his compulsion to restore the Kremlin’s European and Central Asia spheres. That means a Ukraine subservient to Moscow and the U.S.-led North Atlantic Treaty Organization (NATO) in retreat from eastern and central Europe.

Xi means it when—close on the heels of his genocide against China’s Uyghur minority and destruction of the “one state, two systems” arrangement for Hong Kong—he declares that “reuniting” Taiwan with the mainland is an “unswerving historical mission” of the Chinese Communist Party, to be carried out by force if necessary.

The mullahs ruling Iran push a neo-Persian imperial overlordship in the Middle East fueled by an intolerant Shi’ite Islamist ideology. So, Supreme Leader Khamenei insists that the Jewish state is a “dangerous, cancerous tumor” to be “uprooted and destroyed” and, Western experts forecast, his regime may be on the verge of fabricating a nuclear warhead. Israel warns that rather than see the United States negotiate a weak, new nuclear agreement with the Iranians it may act on its own.

North Korea’s Kim, burdened by international economic sanctions, domestic impoverishment and unprepared for a suspected Covid surge, eyes South Korea the way Xi looks at Taiwan: as a free, prosperous rebuke to his own rule but simultaneously, a tempting prospect for “reunification.” Not only to regain Washington’s attention but also to continue military modernization, he resumes missile tests.

Dictators’ provocations of hesitant democracies—President Biden’s yes-and-no remarks about Russia and Ukraine at his January 19 press conference did not inspire confidence—can lead to missteps by all parties. History tells us missteps often lead to disaster. Something for Americans at the supermarket, the mall or watching the Superbowl to consider. And then call the White House and Congress with a simple message: Defend democracies, and not only ours.

Eric Rozenman is author of From Elvis to Trump Eyewitness to the Unraveling; Co-Starring Richard Nixon, Andy Warhol, Bill Clinton, the Supremes and Barack Obama! newly released by Academica Press.

PrevCanada: Conservatives need to swiftly settle their leadership question
Me, Sarah Palin, and the battle for sane courts and truthful pressNext