From the Independent live feed and friends outside court.

Some clarification from the court: Judge Hilliard is going to take submissions in writing on how to proceed with the case, whether there will be a “substantive hearing” and whether he or another judge will be hearing it. That is the decision he will be making at the next date – he is not making a decision on the issue of contempt as a whole.

Judge Hilliard says a prospective next date is 23 October, but that is not set in stone. He says he wants to continue with the case as soon as possible for everyone’s benefit, including Robinson’s.

Judge Hilliard says Robinson has been on bail under the condition that he does not approach Leeds Crown Court, which stands. 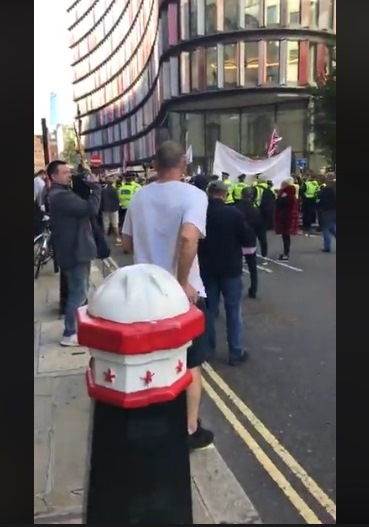 I’m told that about 1000 supporters (left) of Tommy were outside the Central Criminal Court Old Bailey. From the live feeds of two friends I can hear them chanting oh, Tommy, Tommy, and We want Tommy Out (yes, he is out on bail but we want him to stay out, and it’s a good rhythm)

There were about 20 people from Stand Up To Racism – they were removed from the area very early on. The screen grab below is a bit blured but you can see how few they are. 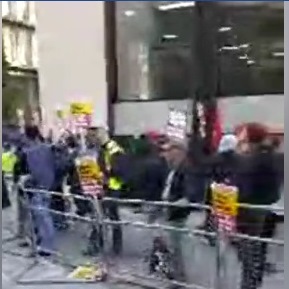 The Police frightened the local pubs such that quite a few of them have closed voluntarily. They should know that it is the left who cause the trouble, while Tommy’s supporters just want a drink, hot or cold, alcoholic or not, and maybe a bag of crisps and a packet of pork scratchings.

Tommy has now spoken to the press and his supporters outside court. Lizzie Dearden twittered

It is indeed excellent is to see the numbers of people there today, in the middle of a working week. I know some people who used a day’s holiday, others juggled their shifts so as to be there. Some are retired – there was a mix of young and old, men and women.

This level of support can only boost Tommy’s morale, and it does the authorities no harm to be appraised of public opinion.

PrevVerily, The Truth is Coming From France
The Absurdities of the Kavanaugh CrisisNext