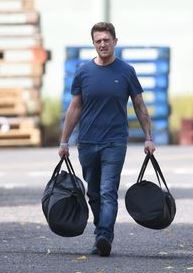 He has been interviewed by Rebel Media and Fox News. To the eyes of anybody who has met him he left prison on Wednesday looking thin and drained.

Unless Robinson is lying – which I doubt – this (the headline – Tommy Robinson was Abused and Tortured with the Complicity of the British State) is the only logical conclusion to be drawn from the accounts he gave to Rebel Media’s Ezra Levant and Fox News’s Tucker Carlson.

How else do you explain the perverse decision to move this outspoken critic of Islam into the Category C prison with the highest proportion of Muslim inmates in Britain?

Why was he put in a ground floor cell, opposite the prison mosque, which enabled the inmates to spit and throw excrement through his window – to the point where his only option was to keep it shut and suffer in the stifling heat?

And why was his food allowed to be prepared and served by Muslim prisoners when the authorities would undoubtedly have known that it would be deliberately contaminated with excrement and heaven knows what else?

No one is suggesting that Tommy Robinson should have been given special treatment by the prison authorities. Just the same rights as any other prisoner serving a short sentence for a non-violent crime.

The right, for example, not to have to spend your sentence in solitary confinement so as to protect you from all the prisoners on a mission to kill you.

The right not to be half-starved – as Robinson was because the only safe food he was able to eat on his limited personal allowance (which the prison refused to increase) was one tin of tuna and a piece of fresh fruit a day.

From the London Evening Standard Mr Robinson went on to say: “I was supposed to be in Her Majesty’s Prison Service, not Guantanamo Bay.”

From the Birmingham Mail Birmingham-based former Guantanamo Bay detainee Moazzam Begg has criticised Tommy Robinson for comparing the notorious detention centre with the Midlands prison where he was recently held. Moazzam Begg tweeted: “No #TommyRobinson. UK prisons are nothing like #Guantanamo. “I’ve been held in both without trial. Don’t compare them and cry to #Trump backers #FoxNews because you couldn’t handle a few weeks inside.

Ministry of Justice officials are denying Tommy’s claims; well, they would, wouldn’t they.

I’m glad he is home. I hope he and his family really enjoy their holiday next week.